My Laser tube is stuck in my machine

I’ve had this machine for a few months. Bubbles in the tube. The tube is the wrong orientation. But I cannot remove it, or change the orientation.

It is STUCK via some previous lunatic using duck tape or similar. This my machine is pretty much like a K40 but with a slightly larger bed.

I cannot rotate the tube, or make it free, just in case I break it. The stupid rubber mounts have become hard. it’s… crazy.

The tube (40watt) delivers around less than half of what it should. I’m not sure about milliamps yet, I’ve got a meter coming soon.

When I have to change the tube in the end, I can’t see a way without breaking it.

Nevertheless, I’ve managed to get something out of it so far.

I purchased LB before I had my machine. The software was important, first. A means to an end?

If you apply IPA to the tape where it can wick in underneath you may be able to get it to release without fear of breakage. Key is to let the alcohol do the work and really help it break the adhesion.

Thanks man, I appreciate it. I don’t want to f*ck the tube. Normally I don’t care, but this time I don’t have the cash to splash. I love this machine.

It’s probably a good idea to ensure that the unit has been powered off for an extended period as well as being unplugged. Alcohol in most forms will flash ignite, which might impede your troubleshooting. Take this advice from someone who plastered the solid steel plate with acetone before thinking how dangerous it was! There was no earth-shattering kaboom.

Silicone water tubes for cooling? You can pinch them and release several times to move the air bubbles.

The silicone water tubes are fine.

I cannot get the tube dismounted for fear of breaking it.

I will post images shortly, just in case you think I’m full of it. 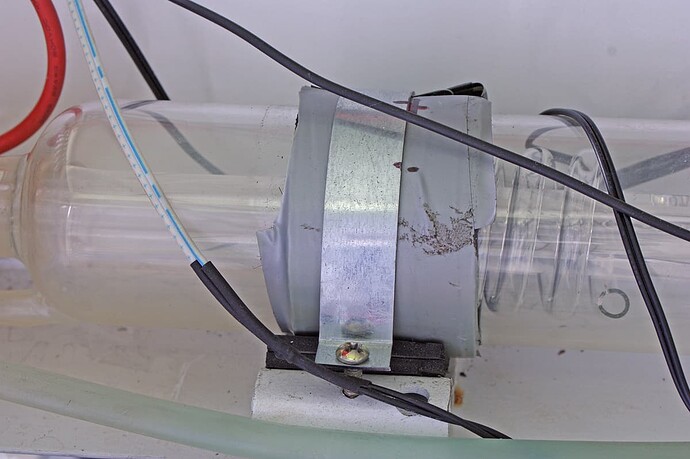 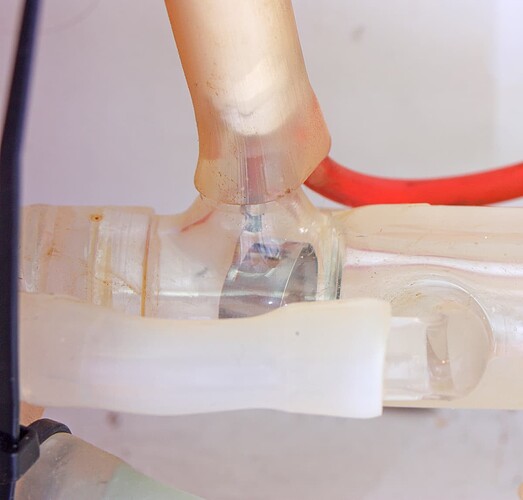 The silicone water tubes are fine.

I was just saying that with the coolant on you can squeeze and release the tubes to get the air bubbles out of the laser tube.

You could also try products like Goof OFF, or XYLENE that will wick under and loosen things up.
By the Way, without a Ma meter, how do you know it is delivering half of the expected power? The only way to truly measure the power is with a meter like Russ’s “Dohickey”, a block of anodised aluminum and a temperature probe that measures temp rise after lasing the block for a specific time.

I’ve got Acetone and that would probably do it - if not, then I’ll look at Xylene.

The problem is going to be that when I do remove it, I’ll have to set it all up again. I did look at some adjustable tube holders, which I almost purchased but then realised there is not enough room under the tube for them to fit (approx. 15mm).

Regarding the laser power, that was just a less-than-half educated guess. I do now have a Ma meter but need to install it. I have to borrow a rotary tool to help cut out the hole in the metal chassis.

I have seen Russ’s “Dohickey” power meter on one of his videos. Very interesting, but out of my budget atm.

I built a “cheaper” version, using a part of an old aluminum extrusion trimmed to weigh 10 grams, and used JB Weld to attach a cheap digital thermometer. Using formulas for specific heat etc I measured mine and got a consistent 32 watts on my K40 at 15 Ma. I had emailed Russ & described my plan and he agreed that it does similar to his.

Sounds like an interesting project. 10 grams is not much aluminium - are you sure it’s 10 grams? it doesn’t seem like much material to heat up.

OOPS! I just rechecked, it weighes 30 grams. Yes it claims to be a 40 watt, Not the mini size that is shorter and is closer to 25 watts. When testing, I ran it at 15 Ma on the analog meter. LightBurn runs a percentage of whatever your max is set at.