Update: Well, I think I have figured it out… $37 is some kind of “mask” that identifies which stepper motors should be de-energized when motion is complete.

Are these setting for additional work axes that would only be relevant for something like a rotary table or a milling head that can rotate along other axes for machining operations?

I had thought that the Atomstack A5 used an Arduino based design for its motherboard using 8-bit Atmega328p. Those typically run fairly stock GRBL firmware with very little custom configurations.

Do you happen to know what MCU powers your board?

Can you confirm this is what your board looks like? 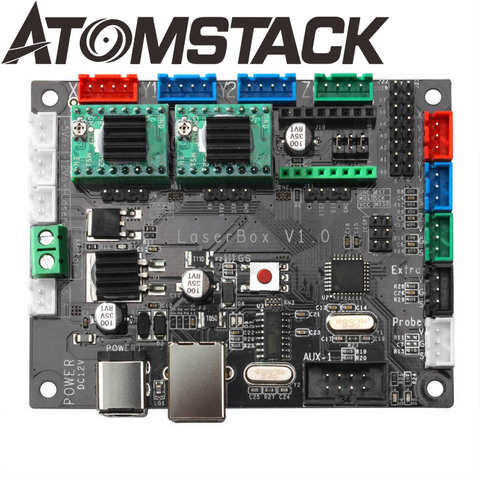 The MCU is blurred out in this image but it looks like an Atmega328p to me.

If you have a lot of custom configuration values those must truly be vendor defined from Atomstack. I’m not familiar with any GRBL variant for Arduino based boards that have significant modifications like that although it’s entirely possible I just haven’t seen them. As you say, 32-bit variants have all sorts of modifications but I haven’t seen that many on 8-bit solutions.

I haven’t yet opened the beast to inspect the internals, but I suspect you are right that it is an 8-bit board on my A5. Just looking at the pattern of the “extra” parameters, it is a good bet that they are for travel resolution, maximum rate, and acceleration limits of the A, B, and C axes, even though the controller does not actually implement them.

Why Atomstack would do that is a puzzle, but it may be that they have only one “standard” firmware file, with just a handful of machine-specific default settings that must be tweaked before the firmware is loaded. Perhaps they are hoping to implement some more complex machine tools in the future?

No matter… I’m not going to try and tweak any of those mystery parameters, nor will I be adding any motion commands for what might be the A, B, or C Axes.

When I do get around to opening up the controller (that is likely when I build an enclosure, moving the controller to its exterior) I’ll have a look at the board.