In the “Cuts” window, one of the settings is headed “#”, which defaults to the sequence in the list (C00, C01 etc) - unless you change the priority. You can change this label in the cut settings to whatever you want. Then whenever you use that layer in subsequent projects it remains with that name.
You can also change the same property in the materials library, BUT it doesn’t appear when you apply the library properties to a layer.
So… how does one make beneficial use of the layer labels?
Is there a benefit in naming them to some standard in the “Cuts” list?
Is there also a benefit in naming them in the library? I’ve found it useful to rename layers, especially when manipulating different portions for selective cutting/engraving. I frequently have a layer named “hold for engraving” which is set to not cut, but to show. For some parts that I’ve cut, there are left and right sides, which don’t get marked as such. By naming the layers, it gives me an easier shot at remembering which ones go where.

Double clicking on the entry brings up the cut settings window with the label as the active field.

I learned something in this test sequence as well. My previous job had named layers and when I activated one of them, the old name appeared. This is a bug, or an undocumented feature, in my opinion. 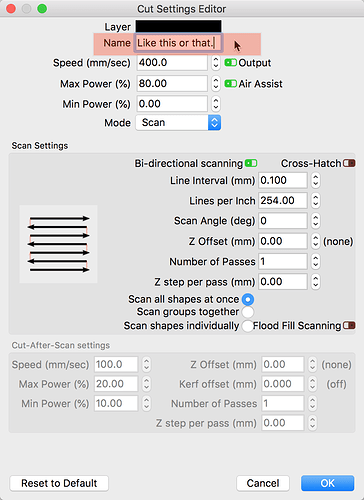 Continuing the discussion from Naming layers - How do you do it?:

So where do you rename the layers Fred, in the “cuts” list, or in the material library?
The names behave differently in each case.
Cheers
Tony

I’ve not explored the material library sufficiently to address that aspect. As noted in the image posted by Rick James, it’s happening in the cuts list. My limited exposure to the material library involved storing the settings or applying them to a layer. I wasn’t aware there was layer renaming available in that dialog.