Need new shocks can anyone help? 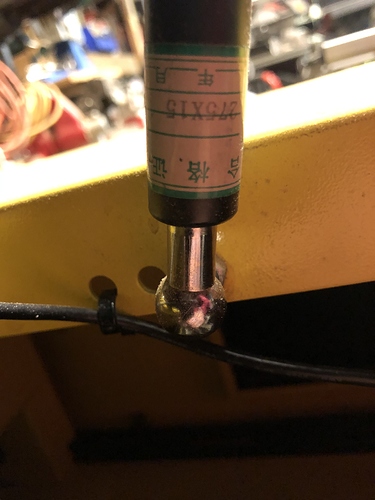 275x15 sounds more like physical specifications than a part number. 275N (60lbs) x 15 (generally, extended) inches. The key will to be find a set with the same mounting brackets/system.

Take one off and take it to an auto parts store, they can probably match it up to one for a hood or back glass. The balls on mine are just screwed into the case and lid, so I just replaced them with bolts.
New shocks are pretty strong, so you might get lucky (i.e. pay less money and get a slightly less stiff shock) if you have a pick-a-part type auto salvage yard nearby - Jeeps, minivans, and SUVs have back glass and hatch shocks, many sports cars have hood shocks (which are usually a lighter force and more akin to the weight of your laser hood).

A word of warning, the hinges are usually brittle, badly cast metal. When I put on new shocks which were too strong, one of my hinges broke and I had a terrible time finding a replacement (finally found it on aliexpress, I think from cloudray). I ended up taking the worn hinges off my Tahoe back glass and exchanged the ones I bought for new ones for my Tahoe.

I would check Cloudray as mentioned in the previous post and LightObject. Alibabba Express would be a last resort.

Thank you, I will search CloudRay