Hello,
I have a new machine, the Neje 2S Max 40W. I was running a Ortur with a NEJE head I installed myself so it worked a little differently. I am mechanically-inclined enough to rewire and assemble some things but not so much inclined with computer language stuff to figure out what to type or how to load the settings into the controller to possibly fix my issue. There is this “weak light” feature that has the beam staying on as long as the machine is powered on, even while sitting in the home position. I have the fire button turned off in LightBurn. I turned it on for the framing feature just to see the difference and it just increases in brightness and goes back dim after framing. The beam was on before I ever paired it with LightBurn, just as soon as I plugged it in. I would just rather not have the light on so much and not have to remember to power off the machine fully. I fear it will decrease the life of the laser. This could really be question for NEJE, figured I would try here first. Thanks for any tips

Recheck the cable going from the controller to the laser module and make sure it’s well seated.

Can you confirm that everything on the laser is stock and came as a unit?

If wiring is correct there’s likely something wrong with either the controller or laser module. It should not be firing at power-on. 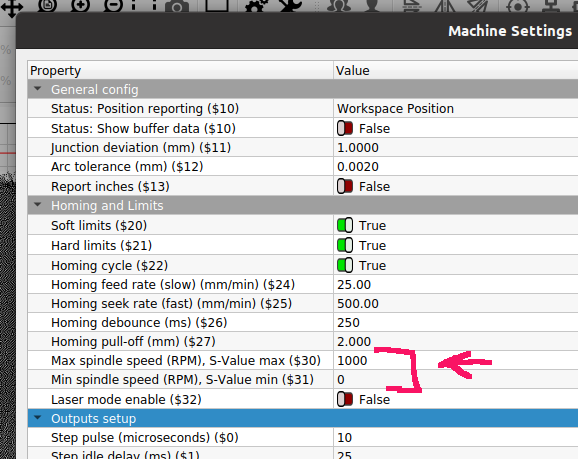 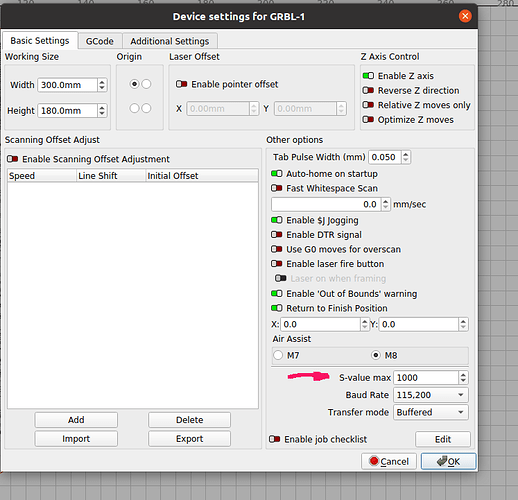 This is quick and easy to check and can cause your issue.

I bought this machine directly from Neje’s page. All I had to do was assemble the frame together and plug in on of the stepper motors. I checked out the photos online and in the little book it came with, all looks correct to me. It pretty much could only go together one way to function at all. I forgot to mention it, but I also tried to engrave something and its mirrored (upside down and flipped). I have tried so many settings in lightburn in an attempt to fix it, nothing works. Its homing in the correct position, all settings show upper/rear left just as the machine does. I considered the possibility of wires being swapped, but I don’t see how it would home correctly if anything were crossed. I have actually had the machine for about 6 months. I tried it out one day and had all this trouble and so I put it away until I had the time, my other laser was still functioning. It still works now, I just have the spare time to put into the Neje at the moment.

I swapped laser heads about an hours ago and still does the same dim light. Earlier today, I had loaded a machine settings file to help with the homing/accel speeds, it certainly helped that out but did nothing for the mirroring issue or the dim light of course. I have sort of fixed the mirroring issue with the help of the control arrows on lightburn to make sure it is moving in the correct directions…up/down were reversed. But now the machine acts like the project is somewhere off the work table and jars trying to move in the wrong direction…at least the image isn’t reversed now but can’t figure out why the machine its going the wrong way. I have sat here for a couple of hours changing one setting at a time to see what works and nothing fixes it fully. Its possible that its a firmware problem all around, I will see if I can find an update or just reset the firmware before contacting Neje about this. I appreciate the idea to help narrow down the cause. At least we know its not the laser module. 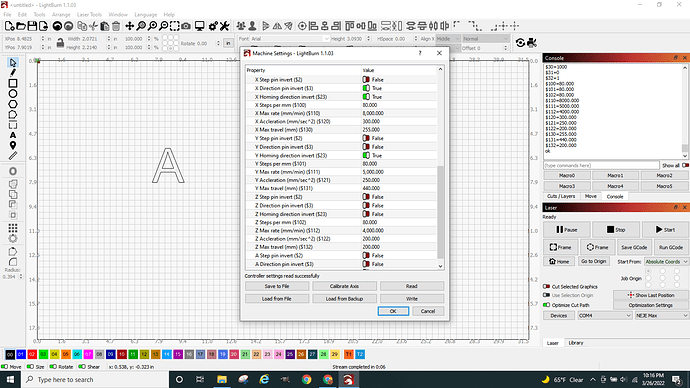 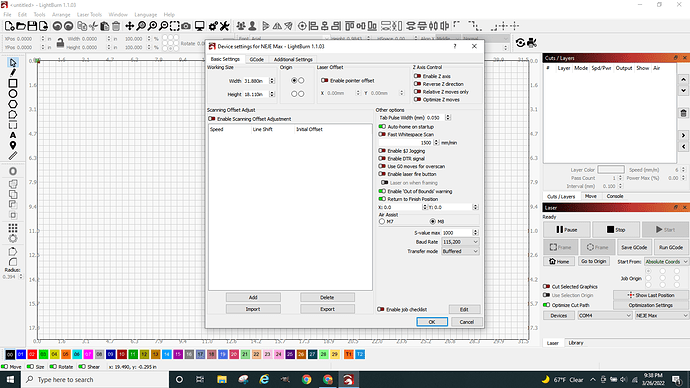 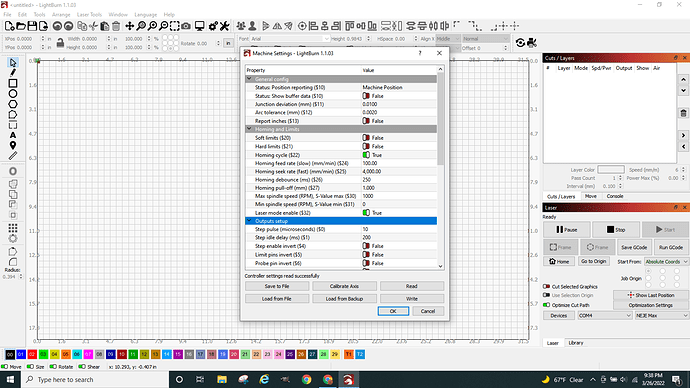 I think I tried those, I will give it another try to be sure

yeah, everything you pointed at reads those same values. I enabled everything you have enabled as well, doesn’t move at all so I went back to how I had it last

This is most likely due to origin being set incorrectly in Device Settings. I believe this should be set to lower-left for your laser. Can you confirm that it homes to top-left?

How do the engravings look?

You may have made some changes or loaded some settings not meant for your machine.

I swapped laser heads about an hours ago and still does the same dim light.

Can you clarify in which way it did this? Are you saying the old laser module had a light when attached to the new controller? If so, issue on the controller side.

First start by changing Origin in Device Settings to Lower-Left. Then we can work on the other issues one at a time. However, I don’t think the laser light being on is a config issue. I think it’s a fault in the controller or possibly a bad firmware flash. If you haven’t already, might be worth upgrading to the latest firmware.

Can you run $$ in Console and copy paste the full text here please?

I checked the cables as well. I decided to try the program that is offered by NEJE, and everything works well there. I hate the setup of their program. Its actually so basic that it bothers me lol. It has to be a setting in lightburn for the issues with the engraving. as far as the dim light goes, I am searching for the firmware update now, not having a lot of luck

I wasn’t aiming for great engravings, just making sure it works. I have engraved some basic stuff with it while it was engraving mirrored. I can reset it all back but it will be mirrored again. It works good in the Neje program, its something in Lightburn or a miscommunication between LightBurn and the device I guess

I decided to try the program that is offered by NEJE, and everything works well there.

Are you saying the laser light is not on when not intended?

It has to be a setting in lightburn for the issues with the engraving.

Not necessarily the case as Neje controllers house 2 separate firmware… one for Neje proprietary and one for GRBL. But this gives me hope that it can be resolved through software.

I tried having it home lower left and it just sits there jarring and won’t quit until I manually hit the homing switch myself.

I suggest taking a more systematic approach to resolving the issues.

Your machine is intended to home top-left. However, the machine origin is meant to be bottom-left. Let’s go those sorted and work from there.

Enter these lines one at a time into Console window:

After that, power cycle your laser. It should home to top-left. Then check that your controls are working in the right direction. Report back please.

Can you rerun $$ please and copy text here?

For whatever reason only the first item was changed.

Run these one at a time. Check $$ to make sure the change has taken for every line.

Power cycle and then retest please.

I checked it all, looks good. it works alright, ends down at the bottom left but since it isn’t searching for a limit switch, it not like a huge deal, just used to my old machine going back to the area it homes at. Doesn’t seem to be much I can do about that lol. It also homes extremely slow again, but I assume its alright that I bump that speed back up?

just used to my old machine going back to the area it homes at.

If you want the laser to go back to top-left after a burn you can change in Device Settings. Set your “Return to Finish Position” to 0,810.

It also homes extremely slow again, but I assume its alright that I bump that speed back up?

Yes, you can experiment with that. I suggest you take a full backup of your current settings so that you can go back to them.

I assume the laser light is still on? I found this excerpt from a neje page:

Note: After flash 8.6 firmware to your device, The laser will turned off completely . If you need weak light focusing, please focus in neje mode, or use M03 S01 and other commands to turn on weak light on GRBL.

I suggest you update your firmware as well as your GRBL firmware. I think that may fix the laser light being on all the time.

I had found that firmware stuff about 30 mins ago and got it downloaded. It will stay on for a short time after powering up but then goes out at some point, much better than before. I was not sure what they meant with that poor English on the Neje page and how to load those settings, but I guess I am good to go anyway. I’m going to save the settings we have it on currently into my computer. Thank you so much for all of your help!