NEJE 3 Plus: Laser marks metal in between letters/designs

I have an issue that I thought was related to the $32=1 issue, but I set that value for my laser and I still get this issue. When marking wood, I don’t seem to have a problem, but when I’m burning/engraving on anodized black aluminum business cards, the laser seems to not power off between designs or letters. That leaves kind of a scuff mark, even though the graphic itself has a transparent background. 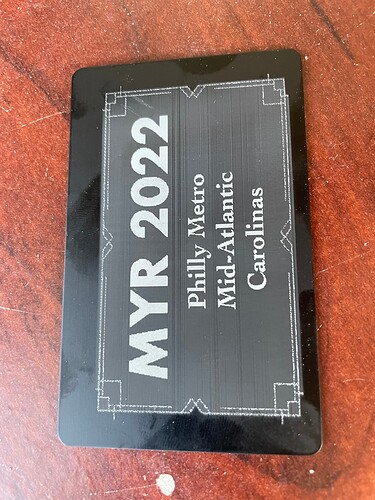 You can see there is a bit of an art deco border, and the background is transparent. It also happens on the company logo I’m trying to use, where in between the letters it’s marking even though it also has a transparent background.

It seems like the laser is going into a low power mode in between engraving/marking, but staying on high enough that it discolors the coating. Is there some setting I can adjust to fix that?

It sounds like you’re burning this as a raster file (image)… I would try to get it into a nice clean vector format if possible. That doesn’t really answer the question of why the laser seems to be firing over a transparent background, but sometimes it’s just better to step back and alter your approach than to keep trying to drive a square peg into a round hole.

Also, confirm the value of $31 in GRBL settings.

I don’t see anything in the design that should result in this as far as I can tell. I suspect it’s still “caused” by the transparency layer but don’t see why that would be the case.

Can you actually see the laser light on during the traversal moves where it should be transparent?

Can you try changing the image mode to “threshold” to see if that changes the behavior?

You may be able to work around the issue converting everything to vectors. I’m curious if the issue is limited to all traversal moves or just with transparent images. I suspected the latter as the laser can clearly turn off all the way based on outer boundary not being filled.

I will see about converting it to vector and if that helps. But how do I get it to fill in the lettering if I convert it? Won’t that just trace that letters, but not actually do the inside?

But how do I get it to fill in the lettering if I convert it?

Put the text on a Fill layer.

@berainlb thanks. Gave that a try and I still seem to get some shadowing or whatever you’d call it. Just in a different way. I’m still new to all this so figuring out things as I go, but frustrated that it is so close to working. Yet not.

Can you post photo of the engraving as well as a screenshot of Preview?

If you’re having this issue with a vector then seems like it might be something on the hardware side.

Ah Preview is interesting. It’s definitely marking the material during traversal. It matches exactly what I’ve been seeing. I checked the other logo and it matches as well the hint of traversal before/after the vector lettering. I have tested at 600 and 1200 mm/m. Maybe if I go faster or turn the power down even more it would not color those areas as much? 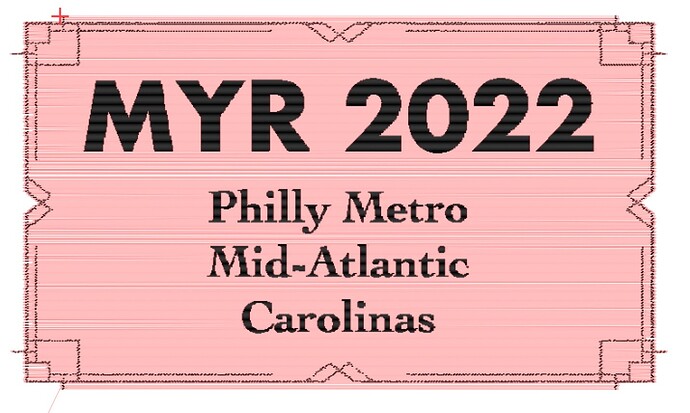 well… is not easier if you trace that image then fill it?

@killrob Even if I remove the border, and do only the text, the traversal between the letters is marked. I am beginning to wonder if the coating it just so sensitive that even if the laser is on minimally it’s creating some discoloration.

i told to trace the image, when i traced the image i obtained this result in preview 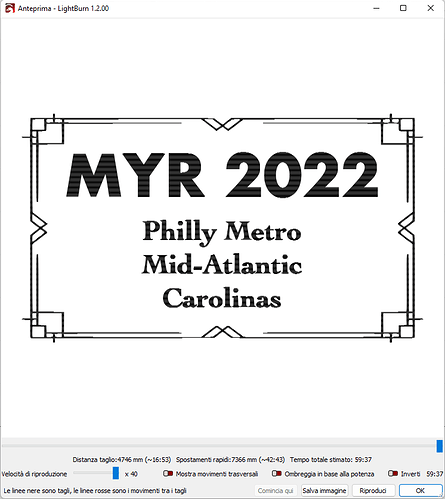 even if the laser is on minimally it’s creating some discoloration.

@killrob Thank you that’s not a tool I was aware of yet. I will take a look at that file.

@berainlb I have to double check, but I believe I see the laser on. In my preview it looks fine. When I turn on show traversal, I see the areas marked appropriately as traversal only, but the final product shows indications of color change.