Neje Max 3 will not fire in Lightburn

I have hooked up a Neje 3 Max diode (A40640) to A chinese control board that came with the diode laser setup I already had. Motors work fine, but the TTL / PWM will not fire the laser. I have the PWM hooked up to FAN on the control board, just like it was on the previous diode.
The previous diode I had was a Universal Blue Laser Engraver.

I’m at a loss for what to try. I get the following from console when I type in $$

No idea is crazy. I’ll try it. I really need this to work.

What’s the exact control board? If you’re not sure take a high quality photo of the board.

Can you also run this in Console and return results:

I have the PWM hooked up to FAN on the control board, just like it was on the previous diode.

How are you powering the laser module?

Separately, do you have a meter? Can you check the voltage of the PWM and Ground pins on the controller at 0, 50, and 100% power?

Neje module laser came with a separate little pcb from which start a 4 wire cabling to the laser module and in which you have to connect power at 12V and the pwm signal.
post a photo of your cabling please.

I can’t take a picture right now but these are 2 boards that Neje send. One has an LED read out of laser power. The other is bodhi. I’m going that board up to TTL. It’s the same as an PWM. I’ve tried both boards. When I had it all hooked up to an Arduino I could get the laser to turn on with the fire button but not this original controller. This original controller will fire the original diode. I’m confused

@jarod_m this is the correct cabling according to Neje 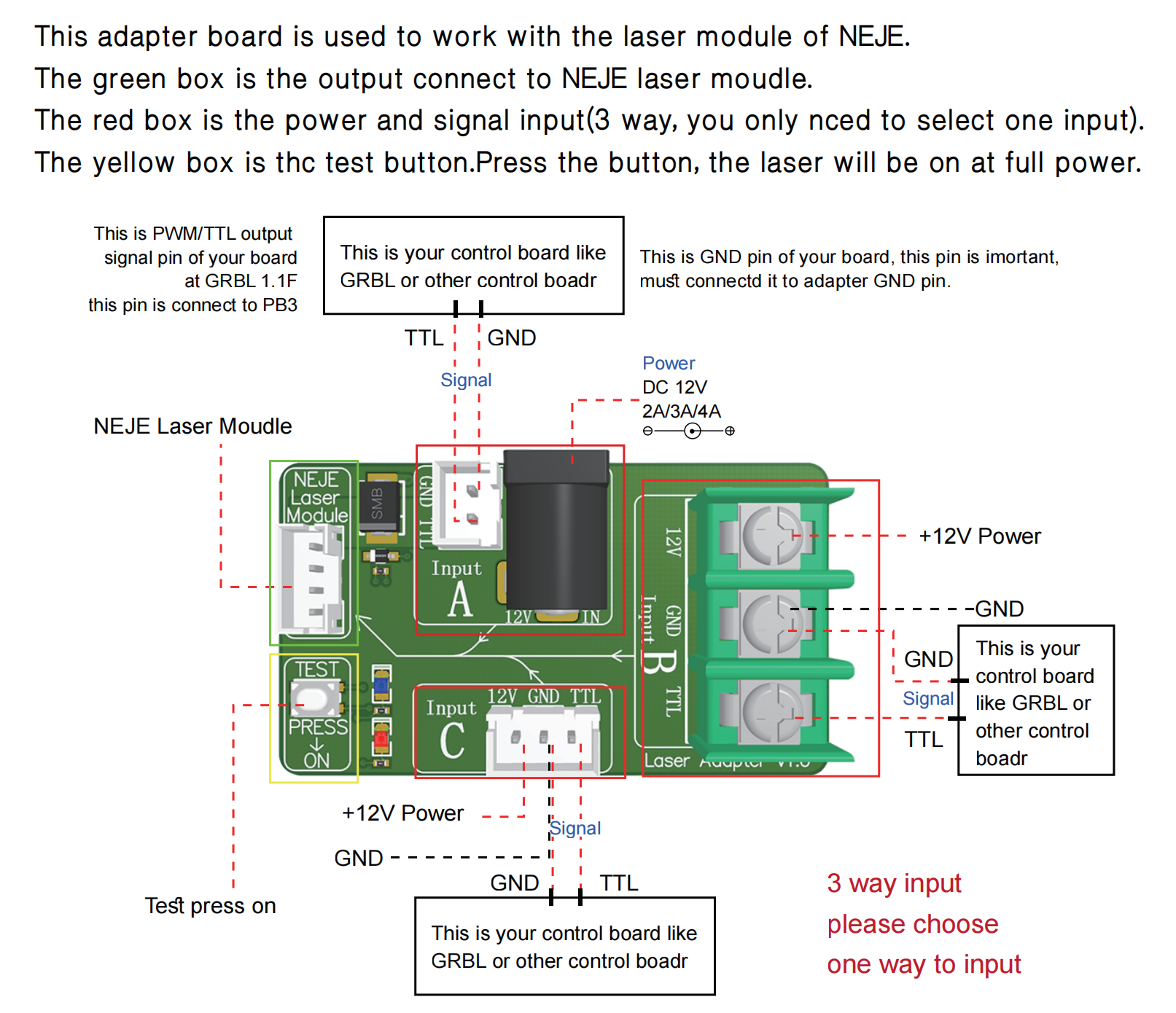 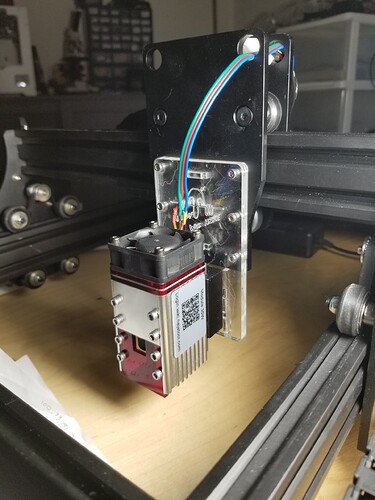 It would help to know what kind of laser was on the machine before you upgraded and what the available controls were. Some of these do not supply power to the module, but turn it on via the pwm, which supplies the current.

You will need three basic connections, power, ground and the pwm control. It sounds like the laser module is working, but you are not wired up correctly. What happens many times, is you think you know how it works … but find it’s not quite the truth…

Many lasers have a different focal length … that is why mine is lower… keep in mind when mounting.

I have it hooked up like it should be in the picture you shared.

The prior laser name is Blue Universal Engraver diode.

I guess this afternoon I should get my multimeter out and check the volts on the FAN pin when I hit FIRE in lightburn. That will help me determine if it’s sending any power. Is it is sending power then I’ll know the issue is somewhere closer to the laser.

What controller is this on? If you can confirm that the board is generating proper voltages on the FAN PWM then it’s possible that the supported frequency of the laser module doesn’t support whatever is being sent from the controller. These modules can typically take a wide range so would be surprised if this is the case.

I can’t find any good literature about the Neje module. This site indicates that 1Khz is recommended but doesn’t list a range. I believe that matches GRBL default.

However, FAN controls are sometimes quite slow… sub 100 Hz range are common. Not sure if this is a factor here.

Does the original laser still work with the controller?

It’s an unbranded Chinese controller that came with it. I’m home now so I’ll post a picture.

Yes, the previous diode still works with this control board.

So the board came as part of a dedicated laser solution?

There are a zillion “Blue Universal Engraver diode” modules out there. Have a link to your model?

You’ve given us the problem with 1/2 the information we need to help you.

We need to know what was there, how much power it used or put out and how it was wired… then we can help you wire up the new module.

Control boards using the FAN as PWM is extremely common.

This is a picture of the control board being used. And I just realized that on the top left where you see White, red, white connectors, they are, from top to bottom, FAN, POW (power), and…PWM. LOL. It used the FAN hookup on the diode I replaced, but I’m about to go out to the shop and hook up the PWM. I won’t be surprised if the laser turns on just fine. 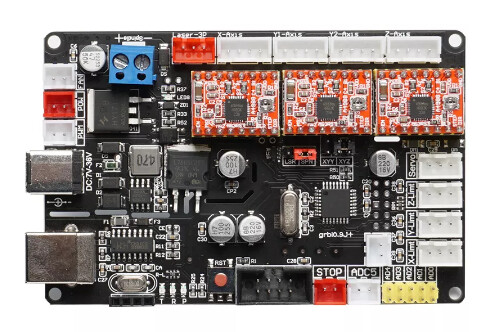 Plugging the TTL cable into the PWM on the board did not work. I plugged the old diode laser back in with it’s control board and was able to use the POW and PWM outputs to control that laser’s on / off function with the Fire button in Lightburn. So LB is definitely sending a signal but the NEJE A40640 isn’t interpreting it correctly. Or not even seeing it if the frequency of the signal is different.

In the past, I was did have an Arduino with CNC Shield v3 hooked up and was able to use that to get the A40640 to fire in lightburn, but couldn’t get the steppers to run correctly. I’m so frustrated.

Control boards using the FAN as PWM is extremely common.

It’s somewhat common but only for boards meant for 3d printers being repurposed. It’s not common for dedicated laser or CNC systems.

Can you take a photo of how you’ve connected the controller to the laser module? Are you using the Neje adapter board?

Basically for the Neje, all it should need to see on the PWM pin is a voltage higher than 2.5V to activate the laser. It shouldn’t take much. It’s up to 12 V tolerant apparently so even putting up to 12V on the PWM should make it fire without issue.

The main control board (with the A4988) is the Chinese board that came with the Universal Engraver 15,000mW.

So I have 2 options. First would be to use the original control board and somehow get the PWM to work with the Neje diode. This one runs the stepper motors just fine.

The second option, is to use an Arduino Uno with CNC Shield and DRV8825 chips. I hooked this up tonight just to see if starting from scratch would help and nothing. No movement of the steppers, no turning on and off of the laser. I have the PWM on the CNC Shield hooked up to the +Z pins which is what the Arduino uses as the PWM (pin 11 on the Arduino).

I have no idea what to do now.

I suggest you just go back to basics. For the moment, stick to the original controller.

Do you have a meter that you can use to validate PWM out of the controller? If so, check voltages at 0, 50, and 100% power. What do you read?

Also, can you take high quality photos of the wiring on the original controller to the neje adapter and then to the laser module?

I have a meter and tested the PWM and it was just under 5V and didn’t change when I hit FIRE in Lightburn. 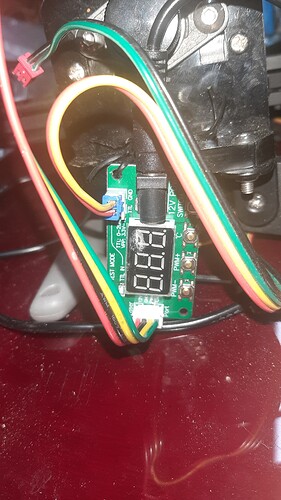 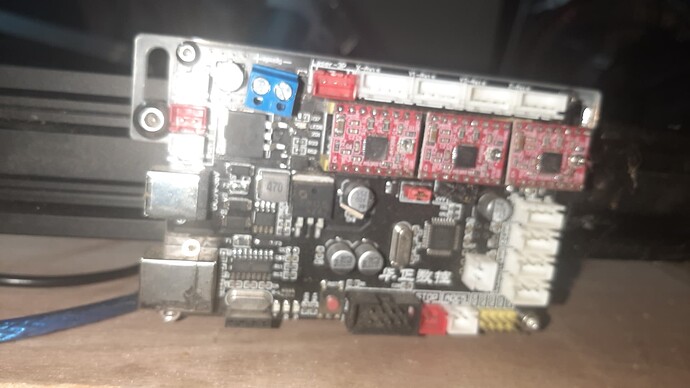 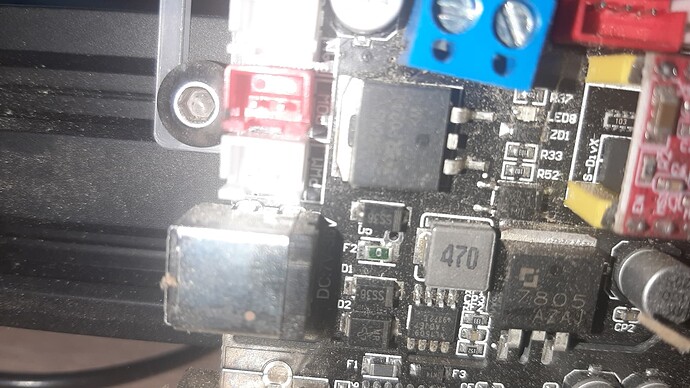 The image I posted earlier of an identical control board is better.

The yellow/red 2-pin wire plugs into the white PWM on the main board, left side just under the red POW connector. Then, the stepper motor wires are plugged into the top of the board above the A4988 chips. I power it with a 12V 4A-5A power supply. It’s truly very simple, yet something is happening to the PWM signal. The PWM signal works on the old diode. Tested that again tonight, so I believe the signal is being lost or not interpreted correctly by the Neje board.

I have a meter and tested the PWM and it was just under 5V and didn’t change when I hit FIRE in Lightburn.

While running each layer test voltage.

If you’re getting a constant 5V 2 things is true:

So something isn’t adding up so the key will be sorting out where and why.

I’m looking at the wiring photos. A few questions: