Ok, I screwed up… Upon trying to adjust my pot on my psu, I had to detach the 3 pin and 5 pin connectors, and remove the psu from the laser housing to get to the pot screw. Of course, I was doing all of this without unplugging the laser, and when I reconnected the 5 pin and 3 pin wiring harnesses, I had them upside down. Something around the main board sparked, and tripped my gfic outlet in my shop. So I unplugged the laser, reset the gfic outlet, corrected the wiring harnesses, and reconnected the laser and turned it on. Now it homes, and relocates to origin like it should, but the laser is firing during relocate path. It also fires during framing, and now even when I don’t have water flowing. I have a 90w reci tube laser, with a zye myjg100w psu with a Ruida 6442s controller. I know I’m gonna get slapped around a little bit here, but any input will be appreciated!

Something around the main board sparked

Around which board? A board in the laser PSU? Also which of the Phoenix connectors did you reinstall upside down? Was it the 3 pin AC line voltage connector, the 6 pin signal connector, or both of them? 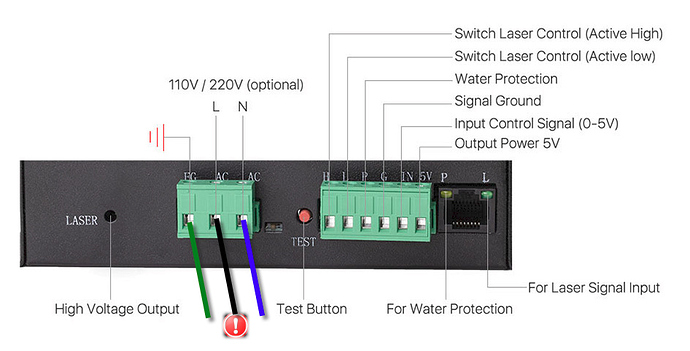 If you plugged the 6 pin connector in backward, all I really see the potential for there is swapping the low signal (on / off signal) with the PWM pulse (power level signal – think volume control) as well as grounding the WP signal (which is actually done intentionally to bypass that control). So nothing to spark about there.

That is unless scenario 1 is the case (where the 3 pin polarity was wrong), and you installed both upside down, you did the 6 pin first, then the 3 pin. That would be sending line voltage in to the WP signal.

The sparks came from somewhere around the Ruida controller board, and I already had the 6 pin connected upside down when I did the same with the 3 pin. Not sounding good. 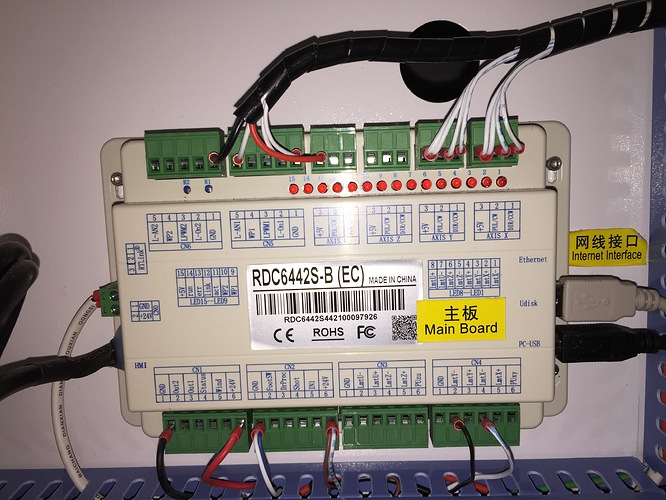 I have a new psu on the way. Hopefully this will put me back on track.

The new psu arrived today and is installed. My laser is back up and running correctly again! Woo-hoo! Thanks for the input.

Uhh, hold the phone… After installing the new power supply, and running a few jobs that run at 26 milliamperes for cutting for a period of time, I noticed on my psu digital readout that it was on 25 milliamperes, then 2-3 minutes later 24. So I stopped it, and felt the psu, and it was pretty hot to the touch. I cleaned my focusing lense and mirrors, and it repeated the same thing. I am running my distilled water temp. no more than 68F. Water flow is good. I did some research about this and one of the possibilities was the cooling fan. Sure enough, it is not working. So I set another box type fan pointed down at the psu, and that actually showed promise keeping the milliamperes steady. I then took the old psu cooling fan out of the one I replaced, and went to swap them out. The new cooling fan was not even plugged in! I plugged it in, and it works. This was late last night, so I ran it one more time with a series of lines, and it did seem to be the problem, but at the end of the 8minute run, I think I noticed it starting to drop. Hard to tell because the digits flicker. I will run some more tests, but now wonder if running it without the cooling fan and overheating could have damaged it, or if it is just defective anyway. I will post again after. P.S. I did install an analog amps meter when I first got the laser to compare and it reads true with the digital.

Many of these laser PSUs are really just low quality and fairly unreliable But it is what the majority of the market demands at the price point.

Yeah, but you would think SOME type of knucklehead in QC would notice the fan not running. IF they even test them at all. Engraved for a couple of hours last night at 20% power, and didn’t notice any problems. We’ll see when I get around to cutting tests again soon.

Ok, so I did some cutting tests with a series of lines last night, and here are my results…

I then set my box fan on the psu, and ran the last test over…

I then switched out the cooling fan, and ran again without the box fan…

Not sure about the 29ma, as I may have accidentally turned the potentiometer screw during the fan motor switch. And I called it a night. I have ocd, so the results are frustrating me!

Be sure you take into account min / max setting and the Power curve created relative to axle configuration in the controller’s cut and engraving (scan / fill) configuration.

Also, have you considered the utility coming in to your home is not always exactly 120v? Fluctuations in your main power source (from either utility generation or even the particular branch circuit your machine is on) will vary output.

Plug in a hair dryer to the same outlet of your laser. Run your test and while doing so, turn the hair dryer on.

Point is, with the results you have provided, you have nothing to be obsessing about.

Yeah, but you would think SOME type of knucklehead in QC would notice the fan not running. IF they even test them at all.

Can you elaborate on this? Being new to this, I’m not sure I’m familiar with this.