Hey all, I have been dealing with a recurring issue that I cant seem to figure out. Sometimes I will have a shape made up of seemingly connected lines, but when I use select open shapes, it will show that shape as being open. Usually what works is using node editing to snap the end nodes together. In this case, the nodes snap to each other, but refuse to auto join. When this does not work, a lot of times auto join shapes works or in some cases close path will work, but not this time.

To me, there is no obvious reason why these lines refuse to connect and create a closed shape. What really baffles me, is that when I pull the ends of the lines apart so that they are visibly disconnected, when selecting either line segment lightburn will select both as if they are grouped, but they definately arent. The only thing that works is that the break apart function will terminate the connection and then allow auto joining to work, but this is counter intuitive as I have to go through the entire line and reconnect it at every vertex, which takes tons of time.

Any thoughts on this? Seems like a bug to me.

It’s possible to create a single “shape” that is actually multiple, disconnected shapes, for example, text: 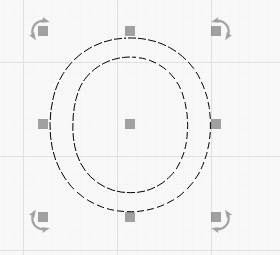 The inner and outer circles of the O here are obviously not connected, but they’re treated as one object in LightBurn. It’s possible to make shapes that behave this way, though we’re trying to make it really hard to do this.

The way LightBurn represents shapes internally allows for this, but we’ve made the editing code try really hard not to let these things slip through, and break things up when you disconnect them. Part of the weirdness you’re likely seeing is a result of a shape being represented in a strange way (it’s hard to explain it).

The reason that breaking and re-joining the shape fixes it is that it shatters it into the smallest possible pieces, then re-assembles them all in the proper order, instead of having the weird / broken / unordered version you started with. We are continuing to work on making this harder to do, and I actually have a full re-write of the internal way of storing shapes planned (after V1.0) to make this actually impossible, but it’s a huge amount of work.

Ok yes, I figured there was some kind of logic behind the scenes that was not allowing me to do what I wanted. The only difference with mine was that it was one continuous line, albeit in segments. What I know is that it was connected, I broke it apart manual, resized some of the segments, moved them, then reconnected, then that when it refused to join.

Thanks for the response, your work and updates are very impressive!