so while i sit here, trying to have a conversation, with background music on, and the laser humming, i wonder: What do you do for hearing?

Its possible im going deaf here. Moving the laser further away isnt an option, the fan is outside the window, etc. So… noice cancelling wireless headphones so i can jam out and not go deaf? what do you guys do?

I have tinnitus so I always have background noise. Even with the CW5202 chiller on it’s only about as loud as the dishwasher so not a big concern to me. My wife barely notices it as well and she doesn’t have tinnitus.

i had to google what tinnitus was.

yea i have the cw5200. honestly i think the main volume/noise maker is the air pump…

maybe i need to look there

some absorbing foam inside the laser maybe will do the job

the main volume/noise maker is the air pump…

I was lucky and have the upgraded air pump. It’s quiet. The main reason is because they installed it on massive rubber bushings. I knew it might be loud prior to purchase so I bought a large aquarium style silent pump which I’ve since returned.

I also made mine nearly sealed by using different weather-stripping since I use it in my house. I barely hear a hum over the fridge and the fridge is in the other room.

Had to think for a moment wondering what an earth can make so much noise on the laser until that is, you mentioned the air pump. Indeed, when I first got my machine it had a next to useless air pump on it mounted inside the cabinet. It was one of the first things to go, noisy and useless.
Now I have one of those Super Silent air compressors. 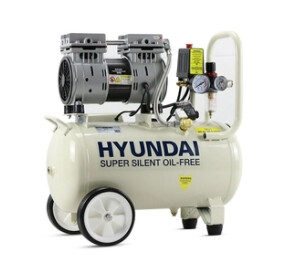 I know they are not exactly silent but it’s very very quiet. and to be totally honest, I forget it’s there and hardly ever notice it’s running. I can easily hold a conversation in front of the laser without raising a voice even though it sits no more than 3ft away. I’m also in a relatively small shed.
The cutting quality has massively improved as well. I would always have one of these on my priority mods list.

I had put some foam insulation strips along the top of the opening where the door closes to help seal the gaps and keep the smoke in.

Last night I was watching a job being cut and notice a flame near where the strut attaches to the lid on the left rear.

When I opened the lid I found the adhesive tape that holds the insulation foam strip in place had come loose and about 3" of the foam strip had dangled down and that was what was on fire.

I remounted the strip where I had originally installed it nut it started me wondering why it had caught fire as the laser head was over a foot away at the time.

I can only assume that the laser beam hit the honeycomb and reflected. If this is the case, is it possible the beam is reflecting more often than we realize? If so, could the foam strips along the edges and front lip of the door be in danger of being ignited?

After this experience unless you can find fire proof foam I’d be wary of lining the laser with foam for soundproofing.

I can only assume that the laser beam hit the honeycomb and reflected.

It could also be misaligned. I noticed that the beam could be reflected on the few cuts I have made. I have a spoil board below the Z so that no matter what I don’t have to worry about the beam bouncing. I make sure that the power isn’t too high and that the number of passes are only necessary. I use only 3M adhesive. I don’t run my CO2 laser full time yet, but so far no problems.

To be honest I think sealing it up is a backward step. All that is doing is creating a vacuum chamber once your exhaust fan is running. It needs to have through air flow in order to extract.
I have a couple of small rare earth magnets on each side of the frame to stop the lid closing fully. It creates around a 1/2" gap along the full width of the machine and allows the air to flow in and out of the fan taking the smoke with it.

It needs to have through air flow in order to extract.

Not sure how your machine is made, but mine has a door over the controller and several large holes in the metal where the controller is mounted. The fan for it was wired to pull air from inside and vent it to the room. For MY use I flipped the fan so it pulls air in. I didn’t seal that one door so between that and the fan, air flows over the electronic bits and the main fan creates a negative pressure in the machine and pulls the air out the exhaust and into my fume extractor. But I have a crappy chinese laser.

Mine is a Chinese machine as well. It’s basically the same as the OMTeck 700 x 500 but not branded as such, different supplier. It’s also heavily modded. 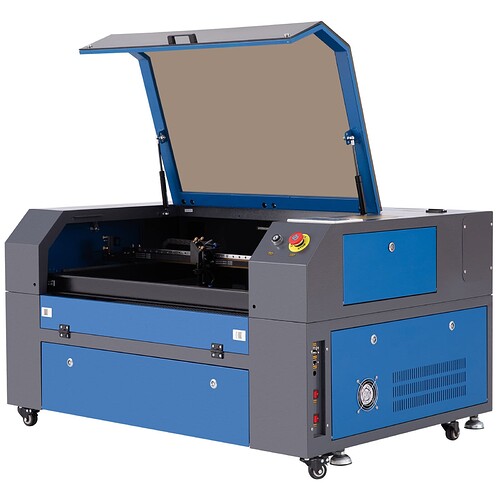 They all have to be AFAIK. Yeah, that door over the controller I use as the intake basically. I run it negative pressure since it’s in my house so I don’t die of fumes etc. I will be upgrading to a 6" inline duct fan once I run it full time.

I actually I meant I have heavily modded it. After the air compressor (which you could happily run in the house and not keep everyone awake) I have also installed a 6" in-line fan. Brilliant addition. The last mod I did a couple of weeks ago was actually on the fan. It didn’t have a delay off facility so I have just put one on.

I have a spoil board below the Z

I use a spoil board on my CNC and on a LED laser but haven’t heard of anyone using one on a CO2 laser. I did add a catch tray above the bottom of the main compartment to make cleaning all the small bits and pieces out easier.

Is your spoilboard above or below your bed? If above the bed, does the material your cutting rest right on it then?

I have it below the honeycomb. Time will tell if this is ideal or not. I haven’t done anything heavy duty with the machine yet though. I am trying to figure out a tach tray but the bed is motorized and I haven’t had time yet to deal with that aspect yet.

The intention of my original post was not to start a discussion on ventilation but to point out that using foam as a noise barrier might have unintended consequences.

To be honest I think sealing it up is a backward step. All that is doing is creating a vacuum chamber once your exhaust fan is running. It needs to have through air flow in order to extract.

My laser is inside the house. I have upgraded air assist running at 5psi in low pressure mode and 25psi for high pressure mode. The pressure mode is selenoid controlled via Lightburn and thrush controller.

I had noticed when cutting certain materials and the cut was close to the front of the bed, a significant amount of smoke was coming through the approximately ⅜" gap between the front lip of the lid and the passthrough door below it.

Being in the house this was not only unacceptable by was also triggering the snake alarm system.

After adding the weather stripping foam the amount of smoke coming throught that gap is negligible.

Standing outside the window where the fan is vented, the fan is blowing a strong and steady stream if air.

The gaps around the lid are not the only source of air to be exhausted. There are gaps around every door and access, the grid in the electronics bay door and about 1"x6’ slots cut into the base of the machine.

It is possible that closing the gaps around the lid has created a negative pressure situation but for running the laser inside the house a little negative pressure is a good thing. If I ever thought the fan was being strained I can simply crack on of the lower doors to provide more air while still prevent smoke from blowing out of the front lid gap.

OK, point taken.
I get my coat on the way out.

IMHO for good ventilation, first is pitching the honeycomb bed as far away as possible. I was fooled into thinking they were like ‘sliced bread’ for laser ventilation. It’s a major obstruction in air flow.

Replace it with a sheet of rolled steel and if cutting, set it on spacers. Hood open about a 1/2 inch. Air goes above and below the material, smoke comes out the back from underneath the cut. Debris either condenses on the plate or is removed by the air flow.

This was a while back, still has the stock head on it.

The reminisce of a cutout. 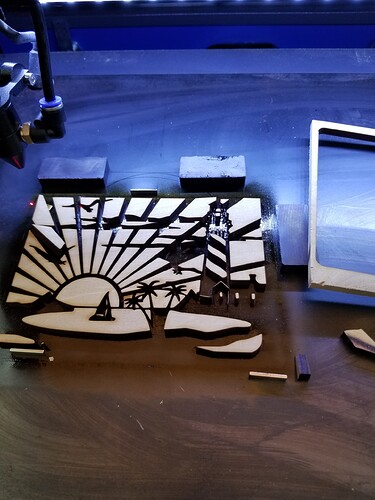 No pickup, push into pan with brush…
What’s left after brushing off the loose pieces. 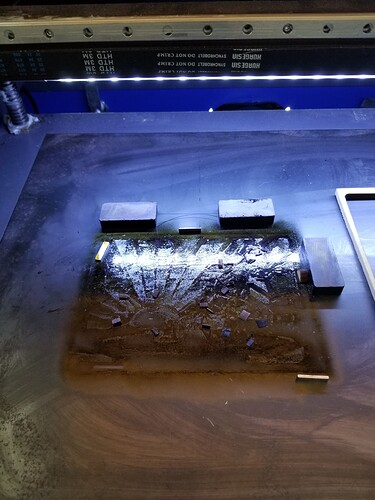 This just wipes off. 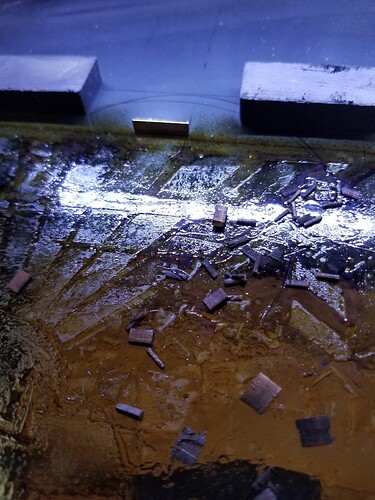 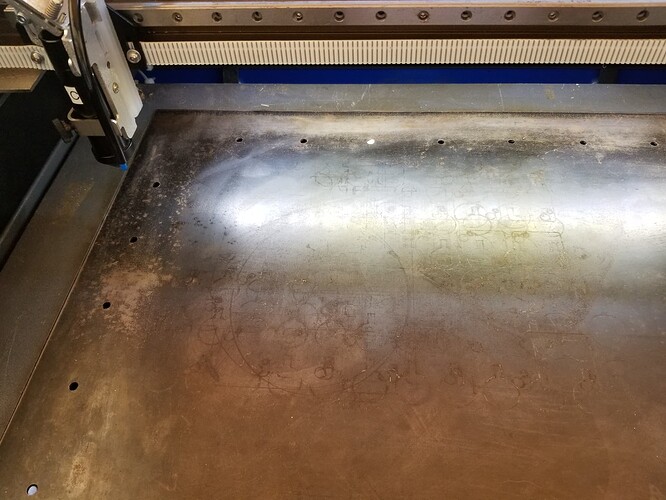 Air flow is debris control, which is fire control.

Clean cuts, no reflections, debris is on the table and easily swept off with a hand brush and the table cleaned up with alcohol for acrylic or acetone for plywood.

Careful guys, you’ll have @WoodpeckersHomeDecor having a dig because you are off topic.

Off topic isnt necessary bad unless the intended message is missed.

Absolutely no problem IMHO of exploring new areas after discussion on the current has been completed.

Most everyone can be distracted by a new shiny bobble!