Only corner points are visible

Does anyone have any idea what might have happened here?

The setting was 1000mm/60%. The surface is a coated MDF board. I know that the color white is not exactly the ideal background for a blue laser.
Nevertheless I wonder why only the corners of the grid were burned in and the lines are not visible.

It was supposed to be a grid, which I created with the grid array (10x10) function of Lightburn. It looks to me as if the laser ignites with 100% at the start of each cube and then continues with 60%.

What do you think? 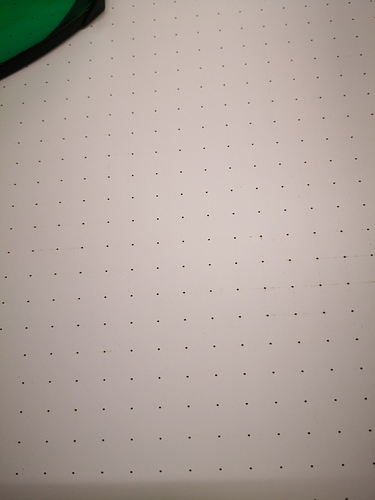 It could be the dynamic axis speed / accel function doing this. Your speed / power settings may be not enough to burn the lines, but the axis are slowed down automatically for the corners and accelerate slower initially. This would give you a burn just in the corners. Try a slower speed in you settings for the layer and see if that helps. I believe the M3 version of lightburn doesn’t use this feature so might be worth using.

If you’re using an older version of GRBL (like 1.1e or earlier) it doesn’t ramp the power up and down as the speed of the head varies, so you’ll get dark corners like this. Versions of GRBL from 1.1f and up use power ramping, so the power output is varied with the speed to make the cuts much more consistent.

As David suggests, your speed is likely too high to burn the material, until it slows down for the corners.

I`m using 1.1f, but maybe i must activate “overscanning” too?

No, that’s only for images. Your speed is too high. Try lowering that first.