OOO No... Another Connection issue

Yes, I know this subject has been raised before but reviewing previous posts hasn’t shed any light on my issue.

I’m running a LaserScript 900 x 600 machine with a Ruida Controller. Network connectivity is via a Powerline adaptor (one end plugged into the Router, the other into a socket in another room). Both adaptors are on the same ring mains.

I’m running the most recent version of Lightburn and using both Mac and Windows PC’s (only 1 is connected to the machine at any one time). Both PC’s are up to date with patches and neither have any sort of connectivity issue to other wifi devices or the Internet. Likewise there are no outstanding firmware upgrades available for the controller.

A stable connection to the Ruida controller via Lightburn is sporadic. I can connect (right click on devices) and the Controller will be found but when I send a job… “File Transfer Failed. There was a problem…”. Right click and connect again (connection successful), send… same thing “File Transfer Failed…”. Reboot everything and try again… same thing. Then suddenly for no reason, a stable connection and successful transfer. I’ve also seen my transfer fail part way through. I have to say at this point, it’s not always that bad, I have periods where the connection is stable and transfer a success, which is great for my nerves

Now I’m not the most tech-savvy but I’ve turned off the Wifi on the Powerline Adaptor as WiFi is not required although it makes no difference if it’s on or off.

The building we’re in is fairly new so we could probably discount the wiring. Both PC’s are using Wifi to connect and speed isn’t an issue. There is nothing else connected via the Powerlines so could discount that as well.

I can ‘ping’ the machine all day long which would suggest it’s alive on the network but that connectivity via Lightburn is dropping. I don’t have the equipment to test for ‘noise’ on the line but having used these Powerline adaptors before I’ve not encountered the same issue.

I’m at a loss on where to go now (by the way, thanks for reading my ramble!!)

Great application by the way, we just need a cut tool in addition to the node edit tool

Powerline adapters are very ‘bursty’ and go to sleep regularly.

Not great for something that uses UDP.

Thanks for the prompt response @Bonjour. To eliminate that, is there a way to stop them from going to sleep It’s strange because it’s not consistent I can go hours using the machine with no problem then 8 or 9 attempts and reboots before I can reconnect.

With a powerline adapter it could literally depend on what other appliances happen to be running at the time. I once setup a powerline adapter in my parents house that constantly gave them trouble. We finally narrowed it down to their old chest freezer causing interference every time the compressor ran. With that unplugged, it ran fine. And @Bonjour is 100% correct that UDP doesn’t help that problem at all. On my Ruida, literally the only network option I found to work was a single cable directly connected between the Ruida and my controlling PC. Even running wired through a router was not stable.

I realize I’m not providing any great solution here, but with my own experience with Ruidas the only reliable solution is a direct connection. Either USB or Ethernet. But direct from the PC to the Ruida with no adapters or extenders in the way.

I’ve given up on Power Line Ethernet / Wifi as well. I had a lot of drop out problems, mainly when the Microwave was running, but other power equipment in the shop would affect it. Point was moot, because I have a hard wired Ethernet shop, no connection issues with LightBurn…

Ruida controllers use UDP, not TCP, which means the devices make no attempt at all to recover a packet of data if it goes missing. If you’re browsing the web, that uses TCP, which includes error detection & correction and a robust retry system, so it’s unfortunately not the same thing, and not a valid comparison.

I personally use a powerline connection between one of my lasers and my dev PC, but I’m sitting in the room with the breakers, and there’s no other noisy equipment on these lines, so it’s been rock solid, but I know that not everyone has that experience. If it’s possible for you to simply run a cable, it’s worth doing.

we just need a cut tool

Point the mouse at the ‘Edit Nodes’ button and press F1 to bring up the help on it. Check the ‘Trim’ (T) command.

How To use 'Cut Shapes' Tips and Tricks

We’ve recently added a new tool, innocently called ‘Cut Shapes’. It will intelligently cut a design in a way that would allow you to run the design in sections. For now, you must manually create the cutting shape, but we’ll be expanding the feature. Imagine your laser is too small to run this design: [image] The Boolean tools could work, but the upper line of text would end up with “joining lines” connecting the parts of the letter e where it cuts. Ideally, those would simply be cut, similar …

I agree with most replies, I installed many high power wifi networks for campgrounds years ago using high output amplifiers and professional directional antennas, played with power line adapters, even the thousand dollar professional unit and then tossed them in the garbage, mostly for the kind of issue you state here. Best way to really test would be to hard wire that Ethernet connection between the laser and computers and i bet your issue disappears. Ethernet over power line are just not that stable, and if you have a power company that uses the lines themselves for usage and billing then you are really in for frustration. Its possible you are losing data every time the smart meter on the side of your building sends data to the power company.

Thanks so much for the responses I think it’s conclusive. Stable connection = hardwire to the PC! I’ll give that a go over the weekend.

@adammhaile thanks for the response. I also have a CNC machine and use Vectric’s VCarve Pro. It has the ability to cut a line between two vectors which is much easier than having to go into Node Edit Mode, separate the line then remove it and join the other ends. Unless I’m missing a trick?

I also have a CNC machine and use Vectric’s VCarve Pro. It has the ability to cut a line between two vectors which is much easier than having to go into Node Edit Mode, separate the line then remove it and join the other ends. Unless I’m missing a trick?

Ah, yes - you want the Trim function of Node Edit. There’s a demo going over how to use it here: 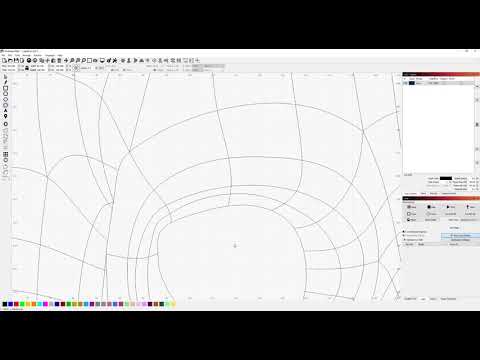 Your work is done!

This is a game changer for me. Thank you so much Adam.

Theres also a huge gulf between the newest modulation chipsets on powerline and the last gen.

I am hitting 90-100mbps over my old 1940s wiring, with a smart electric meter and have no problems sending files from the house to the workshop. My backup NAS is in the workshop, so the line is very rarely quiesced, as it’s running ‘live’ incremental, cloud-type backup.

The biggest difference in reliability is in the switches and cables. Buy cheap cables and you will have issues.

Cat6 or 6A is the minimum you should use - Cat6 is only 55M in gigabit environments, but most people won’t ever use that much.

6A is full 100M and can handle a lot more crosstalk and interference, but they are eye-waveringly expensive.

The type of router/switch can have a marked effect. Home switches compared to the likes of Cisco, HP, Dell, etc. are much more prone to network delays - they just don’t have the bandwidth. That being said, for 90% of home users, they will never see any delays as the workload is small. Add in a few teenagers streaming youtube/Netflix (or worse - Amazon Prime) and you can kiss that bandwidth goodbye and without QOS set up to manage streaming, UDP can get dropped pretty easily.

If you want to set up a robust network for your expensive laser, spending a couple of hundred dollars on a dedicated switch and cables is a no-brainer.