I work with topographic data and sometimes the lines can be really jagged. Lightburn does a better job of smoothing lines than a lot of the other tools I use, but it introduces some weird behavior with open shapes. For example, if I start with this path: 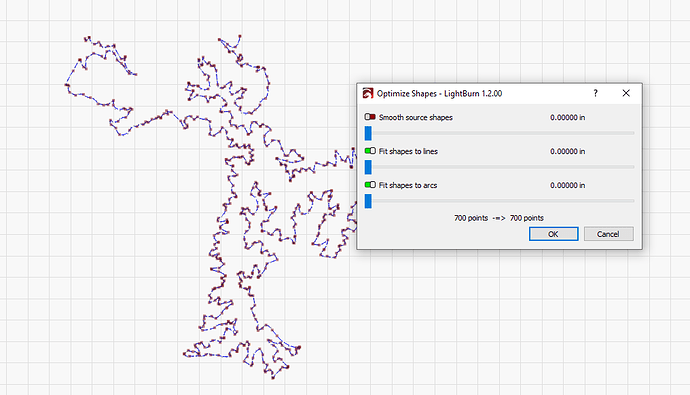 Then turn on “Smooth source shapes” the start or end point will do a weird thing where it adds a point that wasn’t part of the original line. Sometimes it looks like it is trying to close the path. Other times it seems to add a point that is like half way between the end of the path and the origin. 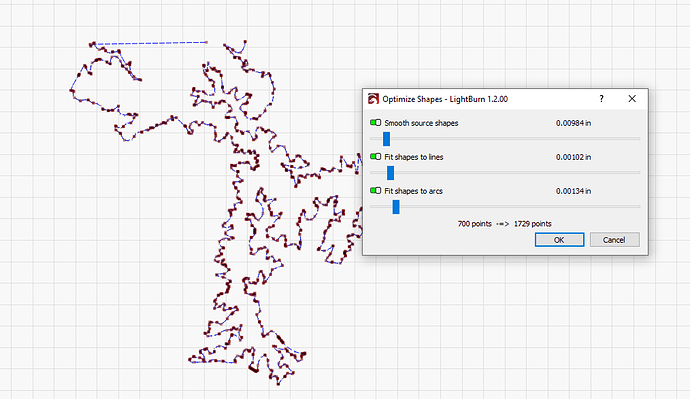 In any case, I would really like it if it could leave the end points alone and not add a weird extra point that is way off.

Are you trying to engrave or cut something?

Why are you trying to optimize? Not being critical, but also not understanding the assignment.

I set it to line, then kick it out of focus by like 1/4" and engrave it at a medium power. This has the effect of engraving a line fairly quickly.

I am optimizing for aesthetics mainly. This is before: 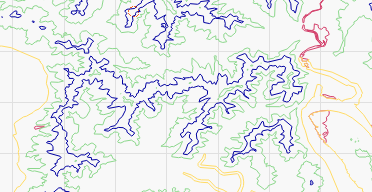 And this is after:

It cleans up a lot of the jagged edges.

I can’t find a good alternative in Inkscape and the same operations in my GIS software generates many thousands of points to do it because arcs are apparently a foreign concept to it.

So Lightburn really is the best place in the pipeline to do this sort of contour line smoothing.

The issue is that contour lines that go to the edge of the piece end up being open shapes and I get that weird behavior with them.

What happens if you connect the line ends first?

That fixes the bug, but I don’t want to engrave closed shapes if they go to the border of the piece.

Additionally a piece can have several hundred lines and so it could end up engraving over the same space a dozen times which would also yield unwanted results.

And it would take forever to close all the shapes.