New to the fourms and new to the laser cutting world.

A bit of background. I bought, used and have heavily modified/expanded my cnc plasma machine. It uses mach as the control software. I am pretty well versed in designing and creating the files needed for the plasma world as with the mechanical and electrical side of things.

As a natural progression I purchased a small laser engraver. A beamo 30w. As with my plasma machine I quickly outgrew this machine. So the hunt begun. I ended up finding a ~2014 Redsail X900 60 watt that has a 600mmx900mm working area. The original owner bought this machine, set it up, made a few test cuts and then it set dormant for 7 years until I bought it. I put a new tube in it (SPT 60 watt), installed new mirrors and lenses and realigned everything. Bought the LightBurn software as the software that came with it was junk. Installed a LightBurn 8mp camera and started burning.

The issue I am having now is what I belive to be overshoot or backlash. It has progressively gotten worse as I use the machine. All the mechanical parts are in order and the only things that are left are the software, hardware, laser psu and belts. 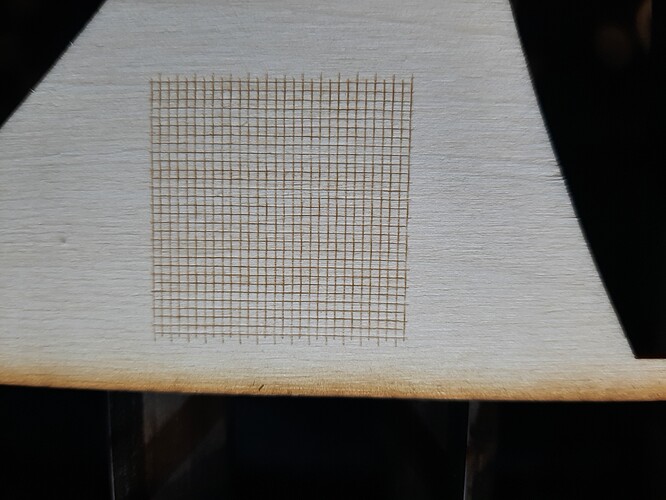 X left to right seems fine maybe a bit off but Y top to bottom is way off.

Looking for a place to start as these machines and controllers are new to me.

Any help is appreciated!

500mm/sec is your problem. That’s way too fast for the cheap steppers, drivers and LPSUs in those RedSail machines.

As a comparison, I use name-brand hybrid 3-phase steppers and still get artefacts at 500mm/s.

You are overshooting the start point in both directions.

Reduce power and do the same job at 100 and see what your results are.

@Bonjour can’t speak for the steppers or psu but it has Moons SR4H drivers. I thought those were good.

This is going to bug the crap out of me if I have a machine that is able to move at 500 mm/s or even 400 mm/s but not give a decent result because of hardware limitations.

@Bonjour here are some test. Tell me what you’re thinking. All ears.

The outline of all squares was at 100 mm/s. The infill speeds progressively got faster. 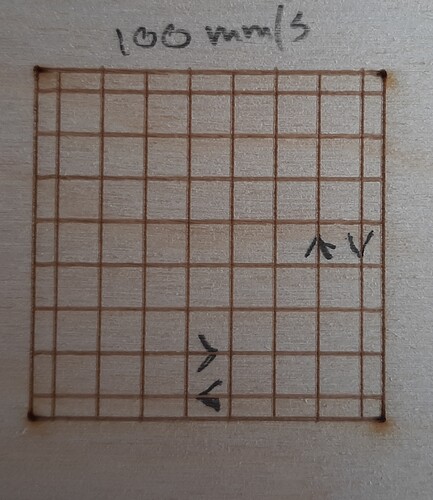 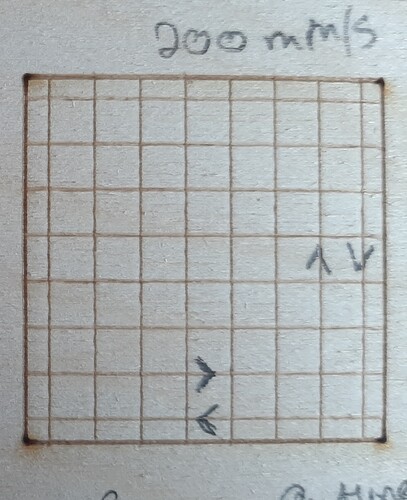 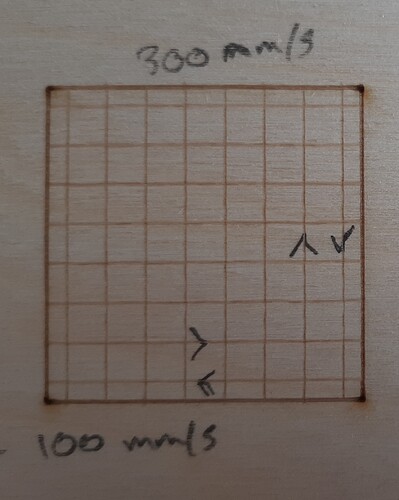 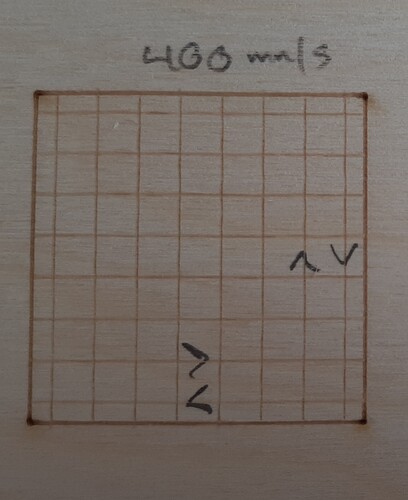 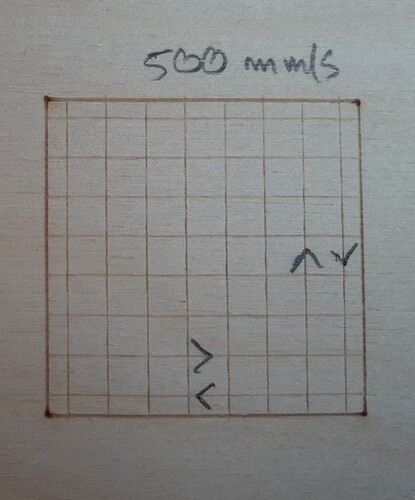 Thinking out loud. Seems that the laser starts early and ends early no matter what the speed is. Which would leave me to belive either this is some kind of slop or slack mechanically or that the laser response time is faster then the controller thinks it is. Am I on the right path here?

X is better then Y but X is still off just a bit and in the same manner.

I wouldn’t think I’m losing steps as everything seems to line up the same. Unless it’s losing steps equally in both directions which I would think would be rare.

Kinda at a loss here on where to start…

I think I’ve talked myself into belt stretch. Worse in the Y axis then the X axis.

Unless your machine is a decade old, or they’re completely unreinforced belts, belt stretch shouldn’t be an issue.

It’s a timing problem, as you can see how it grows the faster you go.

I can’t comment on the Moons driver - never seen one.

Assume that your CNC components are fine (apart from a bit of wobble you can see in all those images.) the problem is the timing of the lpsu initialisation voltage lagging the controller and CNC components. Say you have a two-millisecond delay in reaching initialisation, at 500mm/s that’s a millimetre out. With movement in two directions, that’s 2mm out overall.

You can work it out by measuring the gap and dividing it by the speed, if you want, but you can see it, so measuring it is only useful if you want to add an offset.

A better, more powerful PSU/LPSU would sort most of that, but it’s a combination of every component from PSU(s), LPSU, driver, stepper, rails, bearings, mirror, lenses, tube, cooling, that affects the way your machine works.

If you have a ‘combo’ power supply that supplies the steppers, controller and tube, that is the most likely cause of your problem.

He’s not engraving, he’s line cutting/marking. That adjustment is for scanning (fill) only.

@Bonjour the machine is 7 years old. I need to check the psu. There is 2 psu and a lpsu. Not exactly sure how they are wired up. I’ll report back on that.

@Bonjour @pauldg123 Actually. This is fill mode. Just a 5 mm interval so I could see what was going on. The box/perimeter is line and there for reference to see which way and how far the fill passes were off.

After some testing. Offset scanning adjustment seems to be my cure (still need to fix the wobble). Problem is it’s changing X and Y at the same time. It will be okay 99% of the time as most engravings are done with X axis moving at high speed. If I wanted to do the cross hatch, which I like the look of, the offset scanning will be off on one axis.

@LightBurn is there a way to change offset scanning on each axis individually? Also, if I only add one entry at one speed does that one adjustment cover all the speeds?

@LightBurn is there a way to change offset scanning on each axis individually? Also, if I only add one entry at one speed does that one adjustment cover all the speeds?

I do not have a way at this time to specify offset tables for each axis. That would not be terribly hard to do, however it’s also incredibly rare to engrave along the Y.

The table should have at least two entries at different speeds, as the system uses those to extrapolate others.

Thanks @LightBurn. I kinda figured engraving along the y axis rare but I like the pattern that can be achieved with cross hatch enabled and a high value line interval on the fill and outline setting. It’s faster then combining an object and an array of vertical and horizontal lines then engraving that if you know what I mean.

It would be awesome for me to be able to set the scanning offset for each axis individually as I would like the ability to fine tune my machine. But I know it’s a niche thing.

The table should have at least two entries at different speeds, as the system uses those to extrapolate others.

What happens if one setting will do it for all speeds? Should I enter the same setting but at a different speeds? Or is this not possible/ideal?