I use one Lightburn installation for two laser cutters. They each have different cut and engrave settings. I’m looking for a way to keep their cut libraries separate. The most logical way for me is to create two cut libraries, one for each laser, and load the library for the laser I’m working on. However, there’s no title showing you which library is loaded.
Is it possible to look into adding a library title in Lightburn which will show the library loaded? For now I just created an additional cut group with the name of the laser *** Y1200 *** which shows up at the top of the cutlist, but it might be something to consider as a feature?

You don’t see this? I have 3 libraries, the one that is loaded is for my blue laser machine:

No I don’t, mine just shows “Lightburn Cut Library” where yours show Blue library, even though I saved the library under the name “Y1200 Cut Library”.
I’m using Linux Mint, perhaps it works differently with how it handles the title. In that case, this is then a bug report rather than a feature request 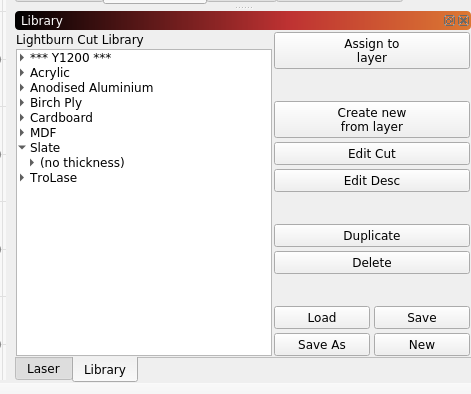 We see quite a few of these weird glitches on Mint. It’s not officially supported because they use quite a few old / incompatible libraries.

Hi Oz, I noticed that when I tried to get the camera working and it only showed a black screen. I saw the discussion on here about Linux Mint and camera issues, which is why I switched to Lubuntu on the PC connected to the lasers. My laptop with Linux Mint I use only for design work on Lightburn, then send it to the laser PC. So fixing the cut library title for Linux Mint is not really important if you have more exciting things to focus on.