I would like to run a test card in my K40 with the Anywells AWC608 DSP and it just will not vary the power levels. This K40 cuts and engraves perfectly and no issues but this.

I have the power levels set in the DSP as 98% and 1%, set to software parameters. I check “shape properties” for each shape in the test card and the power levels are all correct but the AWC608 just ignores them and burns all exactly the same. I’ve changed the minimum levels to 10% as that is about the lowest this tube will fire, no good. I’ve even increased to 25% and no difference.

The DSP in my OMTech 60 watt makes these same test cards perfectly with no problems at all.

My question is, does anyone know if power scale works with the AWC608 DSP ?

I don’t really know that controller, but there is a relatively easy way to see if the controller is responding…

You can use a voltmeter to check the pwm output of the controller or at it’s input to the lps (IN).

If it’s the same voltage when doing a line at 90% as it is at 20% you have an issue with the controller or something else ‘upstream’.

If it does change, then your problem is downstream of the controller.

Use the new Material Test generator in the Laser Tools window and it’ll be much easier. I don’t think the AWC supports variable power values on vector cuts like Ruida does, which is why it works for engraving but not for cutting.

Thanks. The controller responds perfectly to every other operation, If I make squares like on a test card and individually assign different power levels to each square, it works as expected however, it fills them one at a time instead of scanning and lasering the entire line at the same time. I’m only talking about engraving.

It’s only when using power scale that it doesn’t work. I did try the “Material Test Generator” several times as well, power never varies. 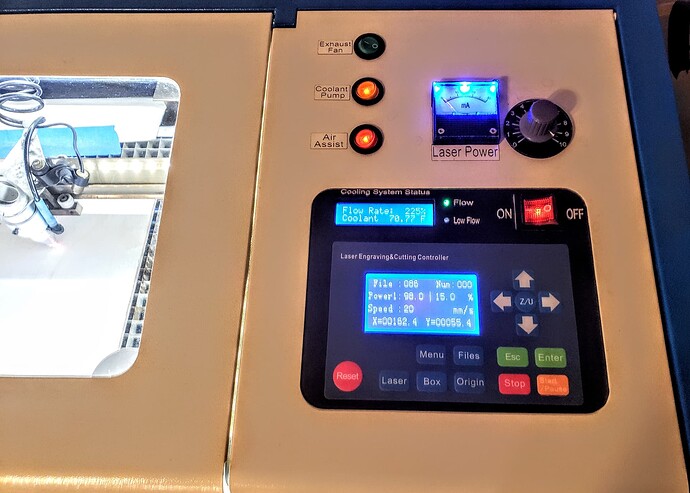 Ok, that’s odd - the material test generator uses normal layers, so it should work. I’ll have to look into that. Like I said - Power Scale doesn’t work with cuts on that controller because it’s just not an operation supported by the hardware as far as I can tell. I’m using “grayscale image” commands to vary the power, which does work on Ruida controllers, but not on AWC. The command set is quite rigid on DSP systems unfortunately.

OK thanks very much for trying to help with this. I wrote to Lightobject where I had purchased this AWC608 and they responded quickly as seen below. So I’ll just do each square individually for a test card on this machine. Not a big deal, just spoiled by how easy Lightburn makes it on the other, newer machines.

Thankfully it all works perfectly on my OMTech 60 watt (with DSP).

Lightburn power scale does not work on the awc608 at this point. You will need to change the power setting for each square/layer to do the test card.