Preview and real cutting are different - Why?

Hello, everybody,
I have the problem that the real cut doesn’t look like the preview in Lightburn.

The whole should be for a photo case, but Lightburn pulled the outer frame into the camera object, although in the preview an edge of 10 mm was planned everywhere. 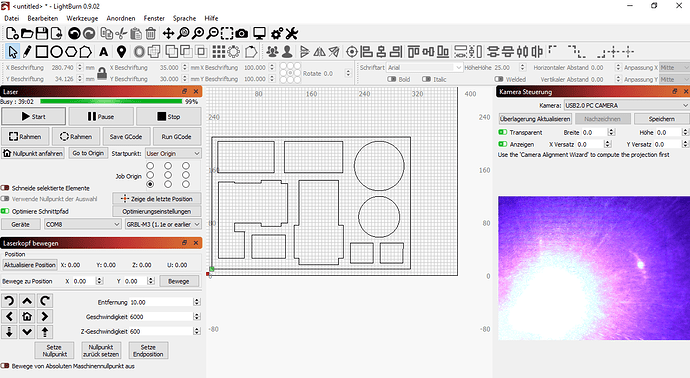 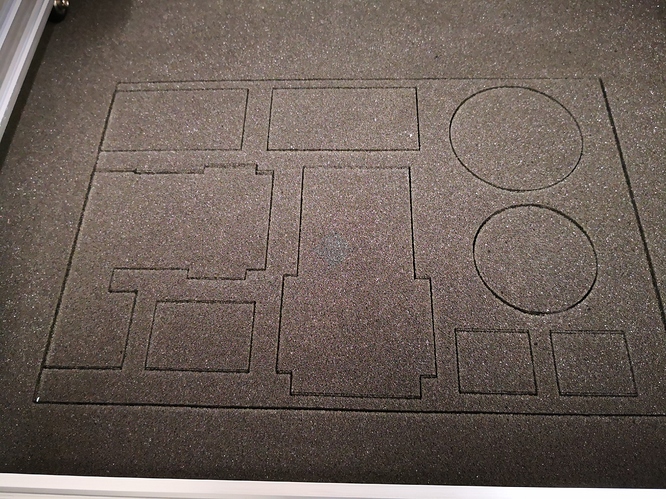 Please provide an additional picture or two. First, show the cut settings for this layer (double-click the layer to expose ‘Cut Settings Editor’ window). Second, you are not showing a ‘Preview’ window picture. You can do so by selecting the “monitor” looking icon (icon between the “camera” and “gear” icons on your top menu) or hit ‘Atl-P’ to display. Please capture and share that as well.

Methinks you may have hit the physical limit on the left side of your machine, causing that final line to be shifted?

I did a few more tries with the same layout and it actually looks like codexmas is right. It was the left mechanical stop of the Eleksmaker A3Pro.

… which brings me to my next point. I just don’t understand how I have to proceed to set a reproducible starting point in the settings. Unfortunately (so far) I don’t have any limit switches on the axes.

I’ve already read the lightburn manual up and down, but I don’t understand how to set a starting point that can be controlled again and again - and permanently. So even if I quit Lightburn and restart it again, the starting point is always at a certain position.

That would be important for me, so that I can always position a workpiece the same way, or if, for example, after “XY” cutting attempts I notice that it has not been cut completely. Then I would like to postpone further cutting attempts. But the starting point must always be the same, otherwise the cuts won’t fit - that’s logical.

This is one of my biggest problems at the moment - the reproducibility and repeatability of the starting point.

You could get away with it by using the ‘frame’ button to ensure it is going to start in a reasonable spot.
Also, maybe try setting the ‘origin’ in LB, which should be where your laser head is currently positioned.

This should help you with Job Origin and using the ‘Start From’ options in the ‘Laser’ window.

Adding endstops is actually very simple, might be the best path especially from an ease of use standpoint going forward.