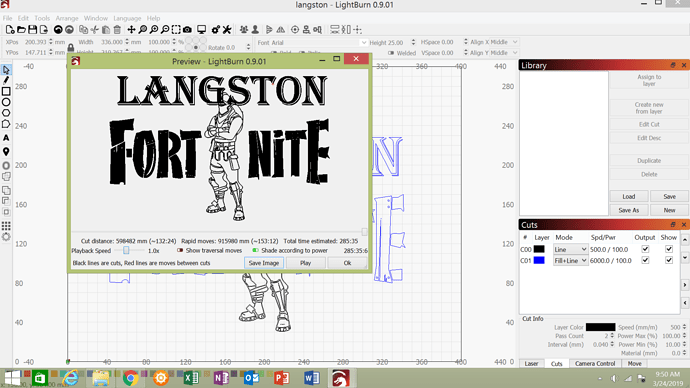 image.png1920×1080 229 KB
i just updated to the new 0.9.01 and open an existing file that i had previously with the old version, and my issue was the preview that is was taking to long. now it preview the same file and the total time estimate is way longer that previews. Do i have to do any adjustment to the settings once I updated the software, anyone with the same issues please advice, other than that i think this software rocks. thanks.
LightBurn 0.9.00 released
Rick (Rick James) March 24, 2019, 6:14pm #2

While it looks like the job could take longer than with a previous version, this is due to the fact that the previous versions “Time Estimation” was incorrect. These earlier versions did not include a motion planner. This version now does!

Speeding up your current job could be possible with some tuning of the ‘Cut Planner’. This is done using the ‘Optimization Settings’ as described in this video.