Problem Engraving on Marlin 2.0 - with Lightburn 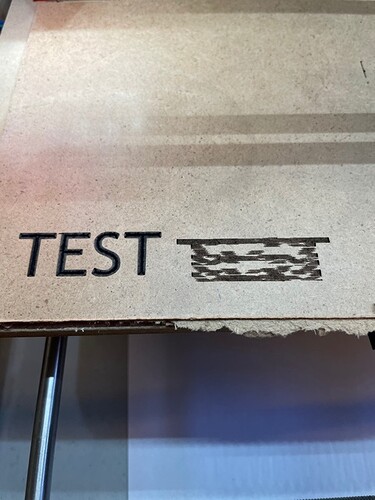 Hello, the above test was done on the same 3D printer converted to use a 2.8W laser from Jtech. The first image - where the “TEST” is clearly visible was engraved with G-code generated from Cut 2d from Vectric and exporting it with the JTECH plugin - and using the repetier host software to run the G-code through the machine. The way this was engraved on the image, as you can see is letter by letter, and following the contour of the letter.

The second image should represent the same “TEST” engraved directly from Lightburn. I should also mention that I tried to save off the G-Code from Lightburn to run it through the Repetier host, and all I got as a results is a 30 second flashing burning dot on the bottom left of the image you can see the dot.

My Printer is using the M106/M107 commands and I flipped pins, changed values in the marlin FW to try to find the “ramp up” feature and disable it, also minimized all the Delays on the spindle and laser, and still cannot get a proper G-code to burn the “Fill” correctly. I also have to mention that whenever I just burn a “Line” that works. So my belief is that there is something wrong with the way the lightburn is generating the G-code for the Fill for the Marlin type machines, because these exported will not even run correctly on the Repetier host.

For reference I uploaded the G-codes generated through the Cut2D and Lightburn so somebody at Lightburn can look at it and perhaps correct the way the G-code is generated.