During two separate occasions, my project stopped engraving. I was engraving on a piece of glass and had three lines (same layer), sent it to the laser and it started engraving. Got to the third line and it stopped on its own. I restarted the computer and Laser for that just in case. No prevail. I could not get the verbiage to finish the task. Note: when I preview it, the display is correct. I am lost as to why and/or what to try.

Second time: My first time trying a project on a rotary. I had all the verbiage and image as desired and it started engraving everything backwards (but the image was correct during preview). So I just flipped the image and engraved it. However, it stopped again during the last ¼” of lettering (meaning the last row of lettering). I could not figure out why it just stopped on its own. Again the preview was printing correctly. Now the two examples may be for different reasons, but they had the same affect on my project. It just stopped engraving for no reason. Any suggestions for the rookie.

Do you mean ‘three lines’ of text, or three lines?

If you meant text:

Maybe try converting the text to path? It may be that the font isn’t great and something is stumbling when doing a live transcoding of the font to a path. 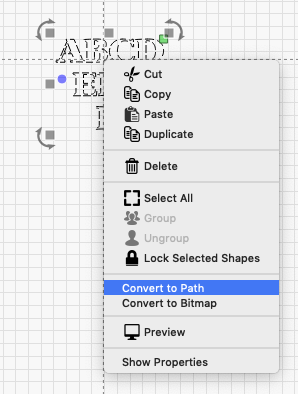 You have a correct assumption. It was three lines of text. I will give your suggestion a try. Thanks for replying.