This morning I was testing some fills and wasn’t getting the results I expected – ramps were not being honoured. This was evident both in the physical cut, and in the preview window (no greyscale cut lines).

Perplexed as all settings seemed to be correct, I saved the test job, exited the software, and reloaded, and ramps were once again working with no change to layer settings.

This silent failure of ramps (not sure when it started, but definitely at least yesterday) would certainly explain some of the issues I was seeing on previous work.

Of note, I usually keep LB open on my machine for days, if not weeks, at a time. I realize this could be a beast to track down, but given that output is suddenly and silently not what’s expected, it seems like something worth looking into.

There have been a few bugs corrected in the pending release that could cause this kind of issue - basically things writing to memory that they didn’t own, which could in turn produce erratic behavior. I’ve not seen the ramp mode fail before - it would not work if the art isn’t closed, but you would get a warning for that.

I’ll keep an eye out for it. If you see it happen and can think of anything that might be consistent about what you were doing when it happened, let me know.

OK so I’ve managed to recreate the problem somehow. The attached file will not render ramps on either the engraving snippet in blue or the box in red. This persists across file save/load. I can also exit and reload the software and load this file and the behaviour persists.

Here is where it gets weird. If I load the file then select the blue engraving path and move it to another layer, say, layer 7, the ramp will render there (if ramp is selected for layer 7). If I move it back to layer 1, it won’t render the ramp.

So it seems like certain layers can become “infected” by something that will refuse to render ramps.

Given that the engraving started out as a tracing on an image on layer 1, it’s likely something to do with image layers and/or tracing them.

You have Flood Fill enabled on the first scan layer. The current release of LightBurn doesn’t do Flood Fill + ramp (it also doesn’t do scanning offsets). The pending release fixes both of these.

Your file, next release, untouched: 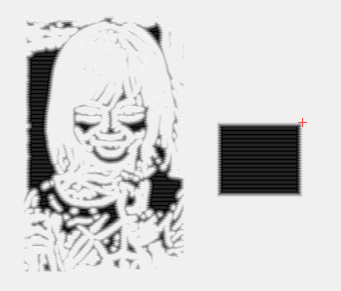 Aha! A perfect explanation. Glad it’s already been fixed. Thanks.