I have an EleksMaker rotary, connected it to the Y axis of the Ortur LaserMaster and calibrated $101 to 95.700 to set the steps/mm so that it moves 40mm on the side of a soda can. To do this I put tape on the can and marked off 40mm using a ruler following the curve of the can. Then in the Move Tab I set 2 saved positions, each 40mm in the Y axis away from each other. Called one “rotary origin” and the other “rotary cal 40”.

The box is set in Lightburn to 40mm x 40mm in the Height and Width fields and when I use the visible diode framing tool it aligns with the 40mm spaced marks I put on the can.

I used $# to see I had originally a 2mm offset so I cleared those with this command:
G10 L2 P1 X0 Y0
verified it and have already depowered and restarted the device to be sure it wasn’t picking up old values.

I aligned the led enabled frame with the 2 black marks(40mm apart) but in the pic you can see the white etched line is not lined up and it’s 43mm in the Y and 40mm in the X(along the can length). I have since solved the offset issue by using the “Use Selected Origin” option as I missed that and thought Start From:“Current Position” was supposed to do that. The box is still 40x43mm though. 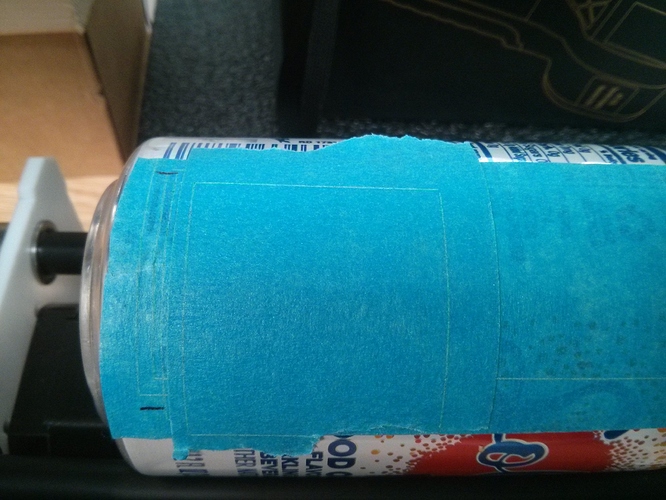 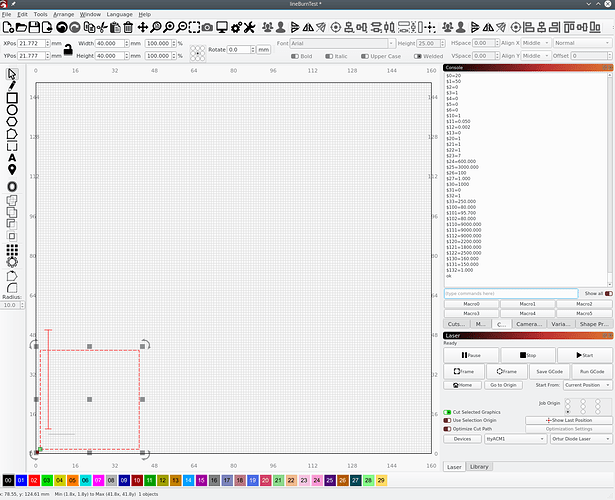 I’m thinking this is either a driver issue or a stepper motor issue since the stock Ortur motors are rated for less than 1A and the EleksMaker motor is rated for over 3A. I’ve also noticed that it sometimes does not move back the same distance it moves forward when I move between saved positions which lead me to thinking it was a microstep or even full step missing issue and to looking at motor specs. I have a much smaller NEMA 17 around here somewhere and if I find it I will try that motor instead.

Figured it out, it was the stepper motor. I pulled one of an old Replicator 2 extruder, a .8A model and it works repeatedly in both back and forth between 2 positions and when cutting it makes a 40mm square. Feels and sounds much smoother too.