Scan is now Offset from the cut?

Hello! I know it has been discussed before and it has been talked about, but everything I read I have tried. I have a Thunderlaser Nova 63/130w and have been running for about 6 months. I have noticed when i engrave something close to the edge that it is offset from the cut. It is closer to the RT than the LT. I may hve a setting off somewhere? I noticed when I cut a 12mm dial and engraved numbers on it. I have looked at the PWM which is 20% on botht hte cut and engrave, my scan offsets have been established and have never been altered. Is there anything else I could look into? I have checked belts and perform regular maintenance on the machine as required. Any help would be great! Thanks

Can you send a picture?

Are you running a lot of fill operations on a lot of separate parts across the bed and then later running cut operations back over those parts? (running cuts much later than a bunch of fills can be risky, using group priority with the cut included so you can finish items in smaller batches is good practice)

Are your scans using “bi-directional fill”? (if only single direction and if the scanning offset adjustment is out - that may account for the problem)

Try a running the attached test file on some cardboard, MDF, or scrap wood it’s only 135mm x 80mm, and takes a couple of minutes.
TestBackLashandFill.lbrn2 (45.0 KB)

I’d like to see if you get a nice consistent 1mm gap between the fill and the line all around. Change the power setting to suit your machine so the lines and fill are visibly marked but not deep) 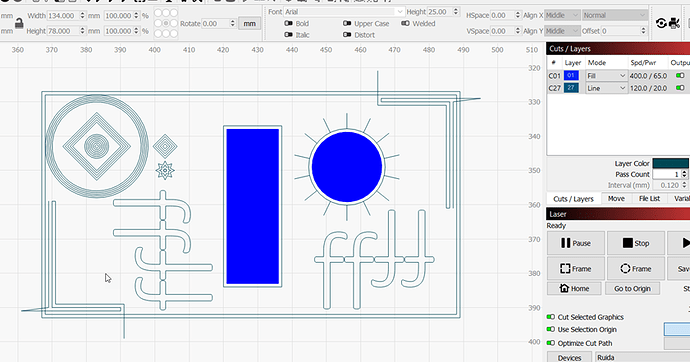 This file also tests for evidence of mechanical backlash (in your Optimization settings check that “Hide backlash” is turned off before you run this test), you will be especially looking for any inconsistencies in the 1mm gaps in the corner areas.