Setting up Smoothieware on an SKR 1.3 in a K40: Steppers don't behave correctly

Hello everybody,
I am currently trying to get Smoothieware running on my SKR 1.3 in my K40 Chinesium.

I’m getting detailed here, because I found no instructions on the web how to use an SKR 1.3 for a K40. It’s for everybody who wants to us

I ran into several issues: first, I couldn’t deactivate the laser (active low on the PSU) even though everything was set up correctly. It turned out that the LPC1768 is a 3.3V MCU and the 3.3V on the output weren’t enough to keep the laser turned off. So I put a (bidirectional) level-converter module in between. And also I downloaded the latest official Smoothieware firmware (non CNC) and flashed it.That fixed the issue: I could now turn on the laser easily.

A level converter on the PWM input at the PSU was not necessary because on 2.75V on average the laser reached 18mA (the max you should go).

Now to my problem:
My X stepper does not behave correctly on direction changes.
When I use Lightburn to jog the axis around the steppers behave correctly, but when I try to laser a circle for example it turns out to become an S-shape. I checked my config.txt whether the dir-pin of my stepper driver is assigned right. It is set to pin 2.6 which goes along with the SKR pinout.
This is a picture of how it looks like: 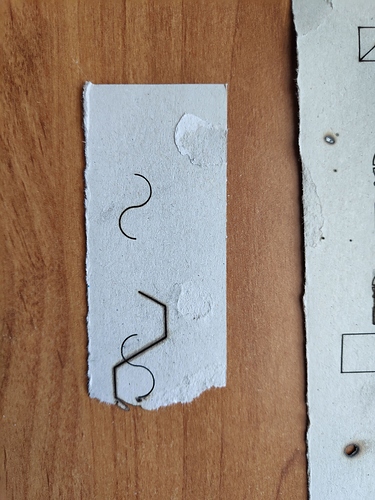 Does anyone have a clue?
My config file is here
I saw in the forum the user Squid uses an SKR 1.3 as well. If you’re reading this:
Can you share your config.txt? How did you solve the 3.3V problem? Are you using a level-converter? Or a Mosfet on the 12V output?

Allright. 10 minutes later I found the problem: I mashed together two config files (one from an original Smoothieboard and another one.) Pin 2.6 was assigned twice that caused the issue. Now everything works fine. I would be still be glad about your config file, squid

Just picked up an SKR 1.3 after my C3D mini died and they are no longer available - I do not want to spend $200 for a laserboard. Would you be willing to share your working config and a little more about your setup/wiring?