I have a Onefinity Woodworker and OF controller with new Opt 6 watt laser. I created a power and speed sample program but only the 10% and 100% power scale fill settings from the Shape Properties seems to work at the specified speed. I tried both the GRBL and GRBL M3 settings with the same results. The machine speeds up between the 10% and 100 % boxes only burning the two at the appropriate speed. The 20% to 90% boxes remain the same for all speeds. Attached is a photo of the sample and screen shot from Lightburn. Any suggestions? 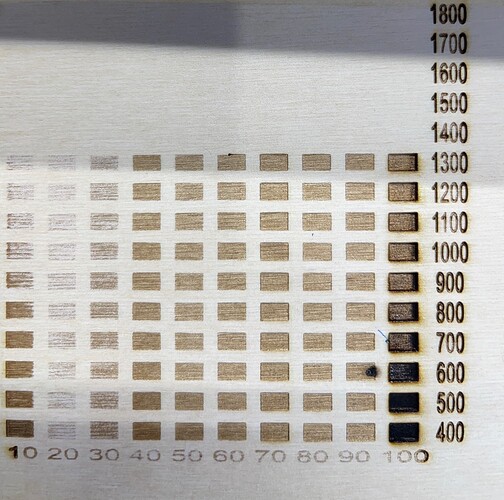 This isn’t really something that’s a pick and choose. GRBL-M3 is required for GRBL 1.1e or lower. GRBL for 1.1f or newer.

How are you determining that these 2 are the ones running at the appropriate speed? Or is that these are the only 2 where a speed change occurs?

In the 2nd photo, there’s nothing burned above 1300. Did you stop it at this point?

Can you run these commands in the Console and return results:

Onefinity recommended using the GRBL-M3 setting with the J-Tech laser but GRBL was recommended in an earlier post on this forum from Oz. Since I am using the Opt Laser, I went with GRBL. Yes, I stopped the program after realizing that something was not right. The machine speed varied while burning the horizontal rows. It was noticeably different on the 100% and 10% columns. The speed was much faster while burning the 20% through 90% boxes and this seemed constant from the 400 mm/s through the 1300 mm/s rows. Speed did increase in the 10% and 100% columns as the program was running until I stopped it at 1300mm/s. As for running the commands requested, I will work on that and post later when I figure out how to do it.
PowerSpeed4x4.lbrn2 (97.4 KB)

Since I am using the Opt Laser, I went with GRBL

The laser module itself will not factor into the choice of GRBL or GRBL-M3. Only the controller. We should be able to determin GRBL version with the $I command.

The machine speed varied while burning the horizontal rows. It was noticeably different on the 100% and 10% columns. The speed was much faster while burning the 20% through 90% boxes and this seemed constant from the 400 mm/s through the 1300 mm/s rows.

One note on your device settings… does the listed work size reflect reality? Is your bed 32x32 inches?

I don’t see anything in the .lbrn file that’s obviously wrong. So the controller should be getting commanded to move at consistent speeds per row. Let’s confirm that with your setup. Can you use the “Save Gcode” button in the Laser window and save the file with a .txt extension? Upload here.

If that analysis holds with your file then there must be something going on with your laser controller or your overall laser system. Nothing comes to immediate mind that would make it accelerate for certain sections but not others. I’m assuming what you’re seeing is that it takes time for the laser head to accelerate on both ends and it’s achieving target speeds towards the center.

This can be mitigated with using overscan in your cut settings as it will give the laser head time to accelerate/decelerate. This may be further exasperated if you have a relatively slow acceleration set in GRBL.

This will be apparent once you’re able to run those commands.

I entered the $I and $$ in the MDI field on the Onefinity controller via the touch-screen monitor. There was a message that those commands were not recognized. I will work on accessing the GRBL settings and post back later with the results. Thank you for your assistance!

The commands are not to be entered in the controller’s display. This goes into the Console window in LightBurn. 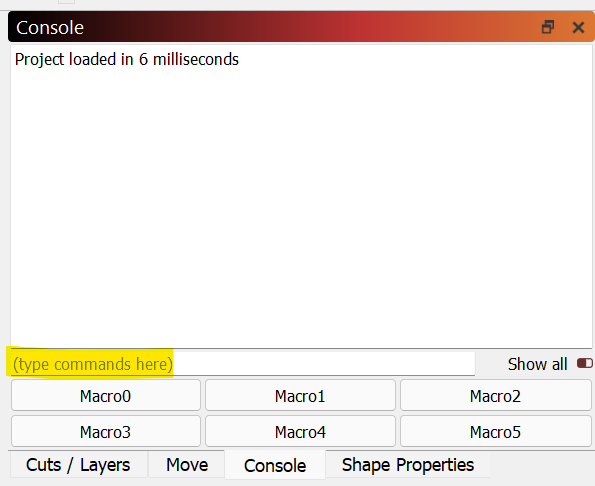 The laser is not connected to my computer. Gcode is saved and then loaded to the controller via USB thumb drive. I am working on networking them together but have not done yet.

Okay. Useful information. But you’re certain that the controller is running GRBL?

My early efforts looked exactly the same.
I was asking for too much speed.

There’s a weird glitch in grbl controllers where two features seem to conflict at high speed and high power and make the dark scorch on the right hand side where the laser reverses direction.

Your 500 row looks close to being in the correct speed range.

I’m sure you’ll get the pattern that you’re looking for.