Simple Aid For Focusing The Camera

I initially tried focus testing only using the honeycomb bed’s pattern as a focusing aid. At first I thought I got it right but then began to wonder if I could do better, so I printed out these five identical sheets of variable sized text and laid them out as shown below (taken with my phone, not the LB camera). 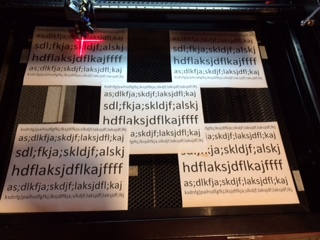 I was able to focus noticeably better. Everything is a compromise with these cameras. Specifically, the most beneficial thing was that I was able to get a good compromise by comparing the smallest line of text located in each corner plus the center. When I initially did my focusing test, I had just focused based on the center area and that resulted in the corners being a bit fuzzy.

That’s a great idea - This reminds me of figuring out how to get the most usable area out of a fiber laser too. You set the center just slightly too close, the edges just slightly far, and halfway between them is the “perfect focus” ring.

Just to add, if you are running Windows 10, it can be slightly easier to focus by using the built in “camera” app within Win 10 because it will display the camera image full screen which is a bit larger than can be achieved in LB. There is an icon on the left side which allows you to switch between all camera connected to your computer.