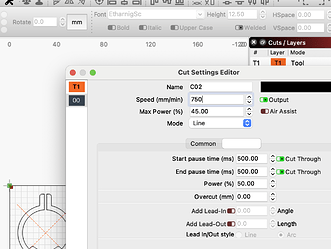 Is this function controller dependent? I can not get it to work, have tried up to a second but there is no break before or after the cut.

Which controller are you using? It should work on all versions of GRBL, Marlin and Ruida. Without the cut through part it will also work on Smoothieware, and it works on Trocen too.

It’s possible that the Gerbil board uses milliseconds instead of seconds for dwell timing.

Default GRBL uses seconds, so the pauses in your generated GCode would be G4 P0.5 (500 milliseconds is 0.5 seconds). If Gerbil is expecting milliseconds, 0.5 would be half a millisecond, and not perceptible.

Try this: Save the GCode to a file, edit the G4 P0.5 lines to be G5 P500 instead, and then run the gcode file to see if that does what it’s supposed to.

thank you, you are incredibly fast with your great service.
I go to the workshop and try it now.

I just Googled to see if anything came up and found a reference on the Awesome Tech site that says their dwell is milliseconds. So that’s fun. GCode is remarkably non-standard for a standard.

I’ve made the change for the next release.

thanks again for the effort

I’m using Smoothie and as far as i remember these are labeled as ms but should be seconds.

I think… i stopped using these back when i entered like 5000ms for 5s and nothing happened so i can only guess it was waiting 5000 sec… These days my START/END gcodes includes G4 and S parameter is in seconds. i was told by Adam that grbl G4 parameter P is sec

In grbl mode (which is generally required for using LightBurn), P is also seconds. But yes, either would work.

It’s not consistent across different devices, which is the entire problem.

… and while Gerbil is running ported GRBL firmware, apparently Paul changed it to milliseconds.

This is what I meant when I said GCode is a “standard” instead of standard.