Was burning some PC Stainless mugs can’t figure out what is happening.

The image was done in two layers however both are set up the same. The first pass was fine. The second pass was fine on the first layer (logo) but the second layer (text) shifted about 10mm to the right.

I am starting from user origin and the job origin is center. Each pass was sent from LB software. 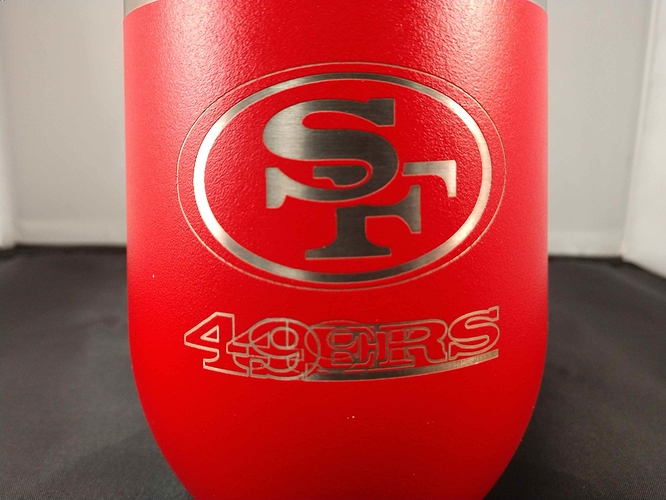 I moved to a new location and the text shifted to the right even further on the third pass. 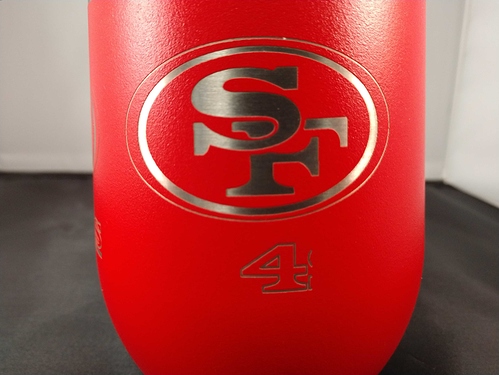 I combined both into the same layer and it burned perfectly. 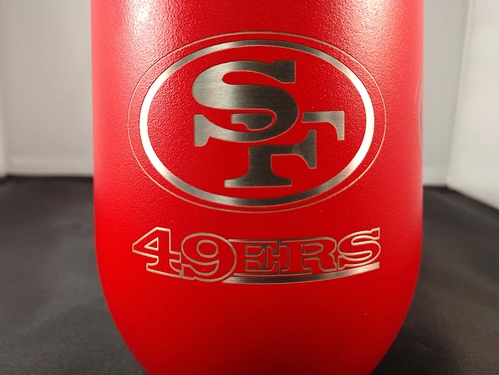 This was an easy fix because the cut parameters on both layers were the same. If they were different that would be a problem.

What could I be doing to cause this problem?

I’m going to guess excessive acceleration while moving to the new location between passes, causing either the cup to slip on the rollers or the steppers to lose steps. Try turning down the idle acceleration and see if that helps.

I’m going to guess excessive acceleration while moving to the new location between passes, causing either the cup to slip on the rollers or the steppers to lose steps

If that were the case I would think the logo would have been burned by that same offset on the second pass. I will put a witness mark on the chuck to be sure. At least it is something to check out.

I think when engraving, if you do successive engraving on the same layer, or multiple passes, the system uses the line-shift speed to move between layers, and when cutting, it uses the idle speed. This means it’s likely that the 2nd pass of the logo “rewound” at a lower speed.

If you drop the Idle Speed to match the Line Shift speed (when you’re doing rotary work) it should prevent the slip. 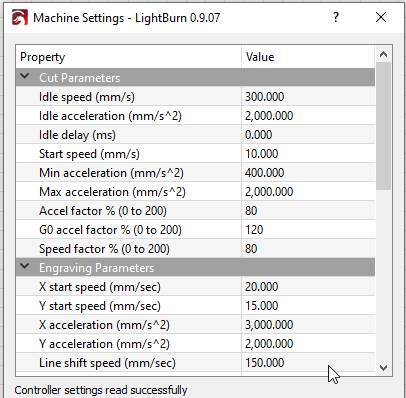 It looks like both of you are on the same track. Either reduce Idle speed and/or acceleration. Now I need to determine that the piece is slipping in the holder.

Using the keypad arrows moves the axis much faster than Idle speed and indeed my rotary is losing steps when using the keypad. Can you set max keypad speed? I see jump off speed and acceleration but no max speed. Does it use max axis speed?

The speed for keypad and in-LightBurn jog moves is set in the Move window, here: 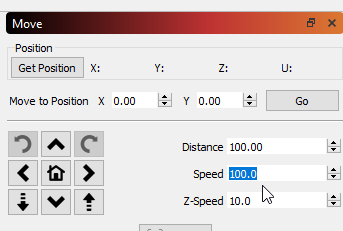 No - there’s a Speed button on the controller itself that you press to change the speed there. I’m not aware of any way for the software to set that one.

I was under the impression that was the “cut” speed. The first value that show up is the keypad jog speed. Next, the layer “cut” speeds show up.

It might be usable for editing speed while a cut is running, but when idle, it changes the jog button speed on the controller.

I’m going to guess excessive acceleration while moving to the new location between passes, causing either the cup to slip on the rollers or the steppers to lose steps.

Back to the original problem of the item slipping in the rotary attachment.

It seems to be the fast jog, like at the beginning and end of the frame command, when it moves from the origin to the beginning of the cut and then back again after the cut. Changing the idle speed/acceleration has no effect on these two jogs. Only changing the Y-axis speed seems to make a difference. Does this sound correct?

It depends on the type of layer you’re starting with.

First, if you use an engrave layer as the initial layer, it might use the ‘Line Shift speed’ for the initial move. If you use a cut layer first, it probably uses ‘Idle speed’.

In either case, if you limit the Y axis speed to a given maximum for rotary work, that will override all the other speeds, and will require changing less stuff overall.

You could also start the job from current position using the bottom center job origin instead of the top, and that would eliminate the initial jog move entirely.

After looking at it more it’s not the jog moves that were too fast but the moves drawing the frame itself. Sorry I gave you some bad information.

Going from rotary back to gantry mode I may have to bump the max y-axis speed back up to where it was. Could this parameter be passed to the controller via the rotary setup like the steps/rev?

What sets the speed at which the frame is drawn?

The speed value in the Move window, if you’re using the frame buttons in LightBurn.

Having additional settings applied when switching to rotary mode is something we’re considering, but it’s breaking the rules a little.

Since the motors and driver settings are so much different between the gantry and rotary attachment, it would be nice to pass all the tuning parameters with the rotary setup. Not sure what rules you are talking about, but it is only a couple of more settings. Just changing the max speed would probably be enough. Keep considering it for a future release. Thanks.

The controller itself has a switch to enable rotary mode or not. If you flip over to RDWorks and turn off rotary mode there, it wouldn’t un-set all the settings changes that were done in LightBurn. People do jump back & forth, so I have to be conscious of that, that’s all. I could make a couple buttons for ‘Normal’ and ‘Rotary’, with some adjustments you can make there, like a stripped down version of the main settings, and have them applied automatically when you switch, but also have the buttons available for you to just press to send those settings, in case you need to. I’ll let it percolate a bit - it’s not a bad idea, I just have to make sure it’s done right.

Understood. Just not compatible if you switch between the two software packages. Those rules!

I am confident, after you think it through, you will come up with the best solution.

It’s only one extra step, to change the max y-axis speed, when I switch to rotary and back. I have them on a post-it note next to the monitor!