Strange things happen (at least to me)

Hi,
I have just started using laser (chinese with grbl 1.1 ) and Lightburn as well and have bunch of problems, I hope somebody will help me solve them.
I tried to find solution among the Q&A, but was not very successful.
Doing letters, I always get traversal lines. If I change $32 value to 1, laser does not leave any trace at all and when I go to preview, I notice that the engraving order is different from the one shown in window (machine engraves letter A first, and then moves further, and preview shows letter e engraved first). 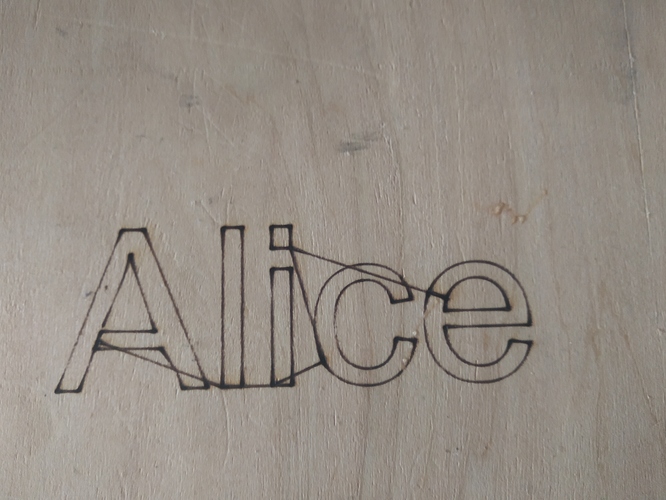 Turning on $32=1 will fix the burning between cuts.

If doing that turns off the output, it likely means you are asking the machine to move much faster than it has been configured to allow, and it is reducing the power to compensate for that. 3018’s are pre-configured for CNC use, not laser use, so their maximum speed is usually about 8.3mm / sec. If you ask the controller to go 16.6 mm/sec, you’ll get 50% power output in laser mode, because it keeps the ‘deposited power’ to the amount you requested.

Changing $32=1 with lower speed made the name, but lines are still there, and it is doing job in reverse order from the one shown in preview. On the attached photo you can see the result with speed set to 10 and power to 40 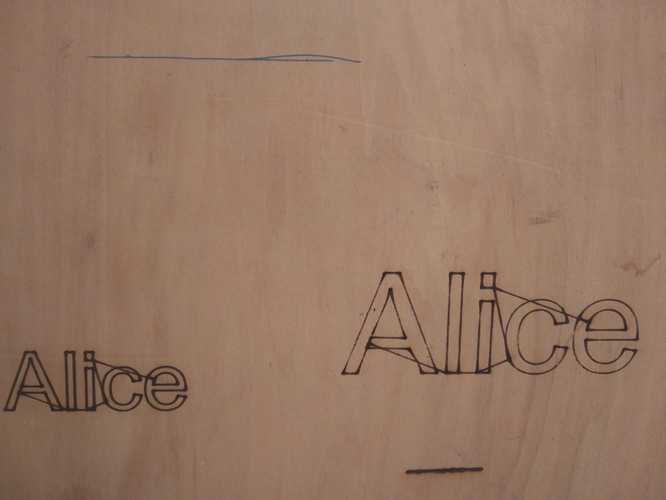 You said “GRBL-1.1”, but you didn’t say “GRBL-1.1F” - which letter version are you using? If it’s earlier than 1.1e it might not have laser mode, which would mean you have to use the GRBL-M3 driver in LightBurn.

It might also be configured to a different spindle speed range. The default for GRBL is 0 to 1000, but many manufacturers change that to 255. You might need to check that setting ($30) and change the S-value Max number in Edit > Device Settings to match it.

Read the first paragraph or so here: https://github.com/LightBurnSoftware/Documentation/blob/master/CommonGrblSetups.md#common-grbl-setups

I have just opened LB and it says, it is 1.1f.
Spindle speed is set to 1000
and I have just checked GRBL settings, the machine did not change $32 to 1, I did it again and traversal lines are gone.
Thank you for your effort and I have a feeling that I will come here again.
Everzthing best