I am trying to import a complex (=lot of objects) fil into Lightburn. I took care about having contour knowing that stroke info is not imported but I end up having only 1 objects over tons imported.
I thought it was a problem of layer/sublayers not well read and I put everything into 1 layer (file here: https://www.dropbox.com/s/c5woyz7d3cvrmsu/nice5.svg?dl=0) but without more success.
Any hint
Thanks

The issue is that this file is constructed using a bunch of complicated SVG options that aren’t supported by LightBurn, or at least not in the way that they’re used here.

The file sets up a bunch of paths as “definitions”, and then places those using some extra options with a command called “use”. We support this one, but for some reason this file is confusing the system, so I’ll need to spend some time to figure out why.

It also uses text, gaussian blur layers, and a few other things that aren’t supported.

Just opening the file in InkScape takes several minutes and over 5.5 gigabytes of memory. (It’s still not done, but I’ve had to stop it)

Does the software used to create this file offer any other options for saving?

opened in inkescape, selected all, converted to path. its ugly in inkscape but imported (d&d) into LB
Here you go. I will leave it there for a day or 2. or until you reply here that you have it.
https://drive.google.com/file/d/1XoJll9YBCRnCjoKyQzaUi_9kiQYQ3kEF/view?usp=sharing

the file is double grouped in inkscape . I do that so they are grouped after import to LB.

The software that output such svg is openstreetmap (either direct from their web interface or through Maperitive).

Thanks, I will take a look (you can remove the files).
I end up exporting a PNG in Inkscape and tracing in Lightburn…working but a shame to go through bitmap to get a vector

by all means take a look at the vectors, it was an easy process in inkscape, the files were a bit large though so inkscape was a little slow when responding. all I did was a ctrl-a to select all, then hit the convert to path menu item, then group button twice and save. There were a lot of paths whice made the files so large. i looked at a few items to see why it wasn’t importing and it seems the soft ware exported them as symbols. something I have not used with inkscape.

Yes, I have been able to tranform all these stranges objects with tons of symbols (?) into path.
Now I am trying to get path which represent the stroke of the objects than only a path in the middle of it (goal beeing to get the outlines of roads). Stroke to path seems not yet working as expected but I am on it

when dealing with a bunched up mess I will start moving some of the in the way stuff to a different layer. rt-click the path and “move to layer” make a layer and position below the active layer or even toggle the eyeball and turn it off in the layers window

Does this look at all correct? 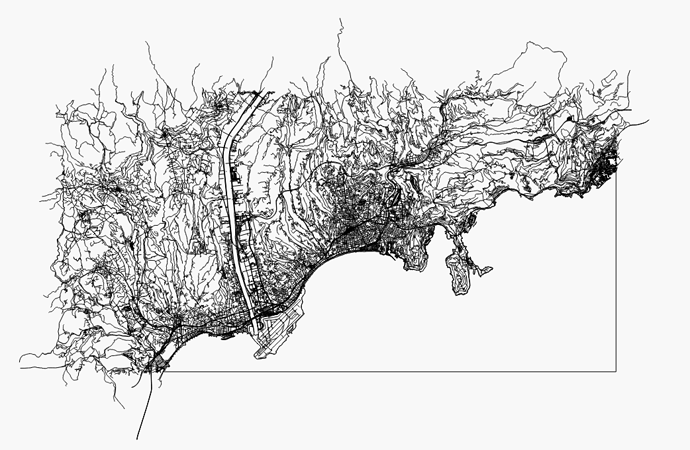 There were a few strays in there that I deleted, but overall it seems to look like a map, and paths are roughly where I’d expect them to be. I have the SVG parser handling the symbol / use tags now.

It looks like what inkscape opened up from his file.
he mentioned it was from open street maps

The software that output such svg is openstreetmap (either direct from their web interface or through Maperitive).

I use OSM and Mapertive all the time and don’t have this problem.

I wonder if you have some strange selection options in your original dataset?

Maybe download OSM file and use JOSM to create your subset.

Without talking about Maperitive and JOSM (where it could have options), the straight download from openstreetmap website is doing such svg file…

It’s intended audience is probably web use, not cutting files. They use the latest available options for SVGs available as per W3 specs.

I found out, if it can help others, that going through PDF export than SVG export, generate much cleaner file