Text on circle. Returning to 0,0 several times during burn

LB 9.04. GRBL 1.1f. Mana controller. Arduino Nano
Strange behaviour while burning text on circle. After framing job and pressing start, the laser goes to 0,0 briefly before returning to the correct start point, then starts engraving correctly. After some characters have been completed the laser returns to 0,0, goes back and resumes where it left off. This then happens 3 or more times during the job. Everything looks fine with the no gaps or errors in the job. I did see this once before on LB 9.03 when I purchased a Vector image of a bird. The laser returned several times probably about once every 10 secs. I had to replace the vector image with a png and that was fine but it was rastered rather than vector engraved.
Normal cutting of vectors and rastering is fine. It just seems to be complex vectors.

LB file that showed the problem. If you can’t reproduce then I can grab the Gcode.
Pepper mill text on circle.lbrn (5.4 KB)

Try using the rectangle selection around the origin and see if you snag anything. I suspect you have an empty object there. If so, delete it and run the job again. I’ll have a look at your file shortly.

Hi Oz, nothing seems to be there. This is a screen shot after doing a cntl+A 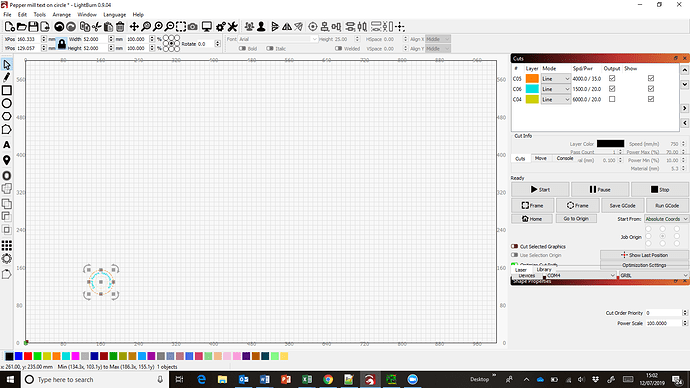 Hopefully you can find something. I’ll see if I can get the Gcode tonight.

I’ve looked at the file and don’t see anything strange - If you can output the gcode for it that would help.

Will do OZ. it is strange, I suspected a corrupt vector file first time and forgot all about until I tried the text on path option yesterday.

Slightly different action over the weekend. When this file was copied into another design, after cutting the rest of the features, the laser went to 0,0 first then engraved this part. Although this time it didn’t return to 0,0 during the actual burn. So at the moment not consistent behaviour. I’ll try and track it down and let you know.