This is NOT a hardware problem

After the last update, I’ve had a few issues. Mainly, inconsistent burns where it seems the laser simply does not engrave evenly…at all. Sometimes it does, but only with (so far) SVG images. And it is sporadic as to when it just stops receiving instructions. It might be top, might be middle, might be bottom. It’s bad after an hr+ burn to see it just skips code. Here are a couple examples, unfortunately I just threw the 2nd tile of the Beatles out, but it’s not on me these ‘mistakes’. I have checked all the usual. Eccentric nut, tightened belts, cleaned lens…NOT ME. It just quits for quite a bit, then outputs again.
These are exactly the same exact settings for the X-mas pic. Look at the difference. 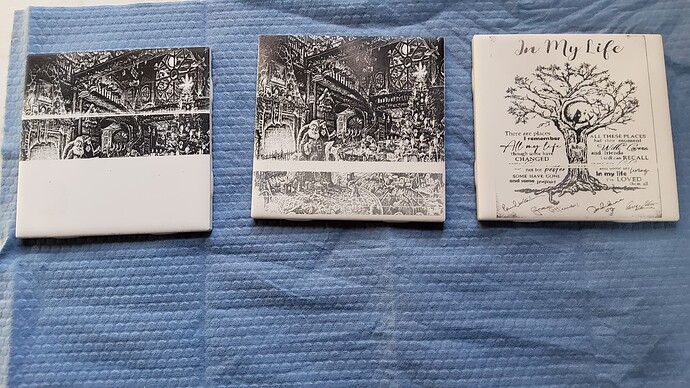 Seriously WTF? If it’s me, I’d appreciare any input…but honestly, it’s not me. Same exact parameters, 2 majorly diff results. Sick of it.

Could you attach a lightburn save file for us to take a look at the project?

I’ve seen this effect in the past from both hardware and software - with devices going to sleep and suspending USB functions, as well as stepper motor drivers overheating and shutting down. How fast are you running the job? Is it within your machine’s capabilities?

If you click ‘Save GCode’ and save to a file with .gc or .gcode in the extension, you can drag that file back onto LightBurn’s window and it’ll show what the generated GCode gets interpreted as. This doesn’t work for grayscale, but will work for cuts or dithered stuff.

If the imported / simulated GCode looks right, then the problem really is likely something to do with the machine.

I’ve most commonly seen what you’re showing here caused by loose wires to the diode head.

Sure…right now I have ton’s of stuff to do, but I will copy the gcode and send. Also I am running a Sculpfun s-10 head on a s-9 original frame. I believe it was 1800 mm/min at 50% power. The machine can supposedly run at 6000 mm/ sec. I wanted a darker burn to hand paint the tile. It works better for me if the initial burn is really dark.
Thanks guys. I appreciate the response. I did check my connections…seems like it is OK. Just weird.

The Sculpfun devices are known for a weak USB connection. The boards seem to be very sensitive for different types of cables and electrical interference. I would try a high-quality USB cable and remove all electrical disturbances from the power line you are using. Just as an example: one user noticed the laser to stop every time the kitchen exhaust fan was turned on in another room. Very hard to diagnose because such things happen very unpredictable and the coincidence is hard to find…

Thanks. I’ve been busy and some issues lately. Won’t bore people with them. G/F uses Cricut, I do sometimes on occasion, and while we have tons of phones, tablets, even laptops, only 1 works for lightburn and cricut. I will have to get another dedicated laptop for just the laser.

I’ve never noticed any issue before running any other electronic devices. As an example, the laser is in the basement and so are the washer and dryer. Also the outlet I am plugged into runs the laser, exhaust fan, computer, air assist, and is most likely on a 20 amp breaker that also controls the basement lights. Always been this way, but the house is on a 200 amp service. Shouldn’t be an issue. I actually do long burns, 4+ hrs, while doing laundry just to have a reason to monitor the burn and hang in the basement. I’ll recheck the connections again, and I’ve always used the supplied USB cable. It prob is just a coincidence it happened after the last update.

When I get a chance, I will export the GCode and run it in Laser GRBL and also post the export here. Thanks guys, it just might be a few more days before I can. Really appreciate the responses.

Redid connections and moved air assist hose. Don’t really think that was the problem, but 1st burn in awhile and it came out fine. Really glad it doesn’t seem like a software problem. Thanks all.