Hi, I failing miserably with this and cannot figure out what I need to do.

I have tried processing my photo using image-r as well as adjusting with just Lightburn but nothing seems to work.

Some say process on image-r use Norton Black Slate and just down load and import.

Others give the manual setting in lightburn.

I’ve tried these and various power and speed settings and I get terrible results. 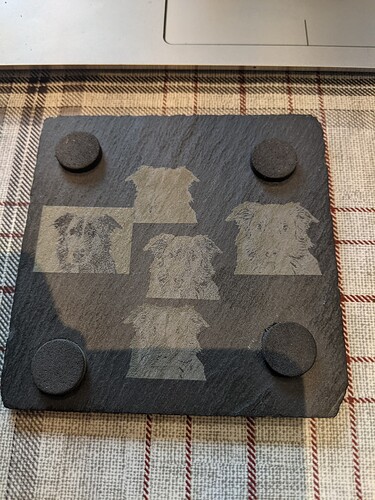 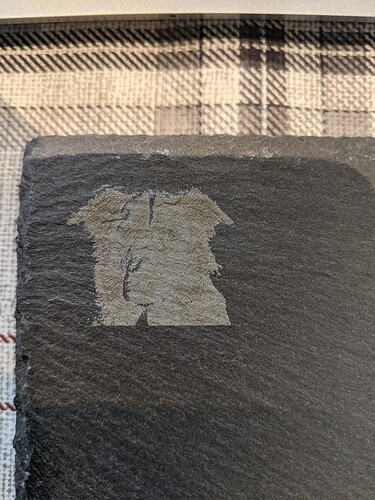 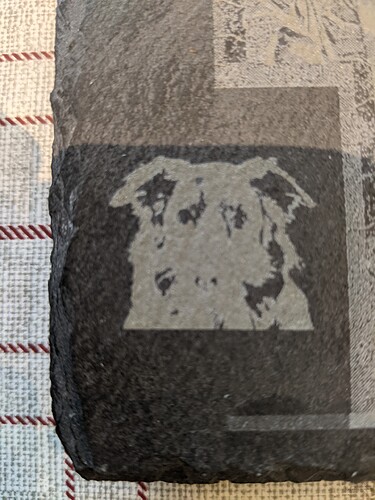 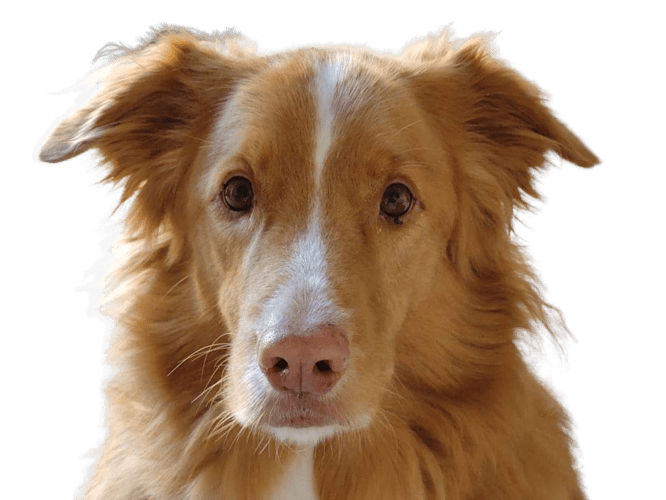 We need to know your settings, and laser type

I expect the image is quite small and you are trying to cram to much detail into too smaller place and the image is going over it’self trying to print dots on top of previous ones.
If an image is just to small you cannot actually fit the detail in it, remember the size of the laser spot, any more than that per inch and you go over the area alreay done.

So after many many failed attempts I finally have my xTool D1 engraving photos on slate by using Laser Box rather than Lightburn.

Obviously I would prefer to use Lightburn due to its extensive features, but why can’t it engrave photos on slate?

I tried all manner of settings after importing the photo from image-r but wasted coaster after coaster.

Here are the failed attempts in Lightburn followed by the correct output from laser box. 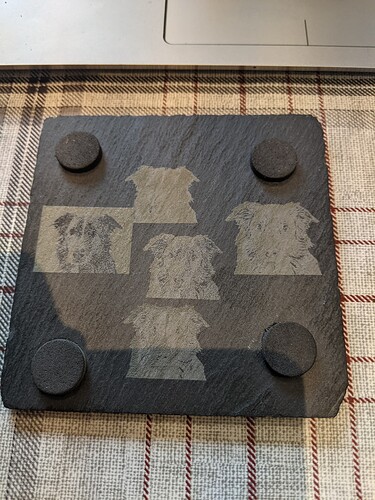 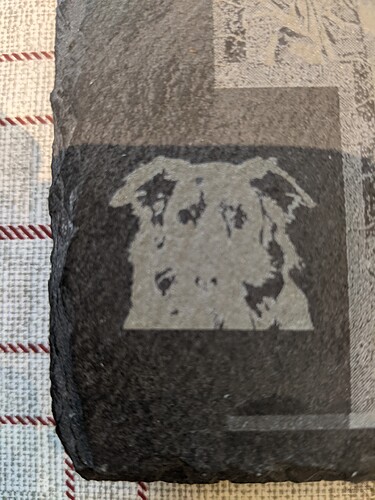 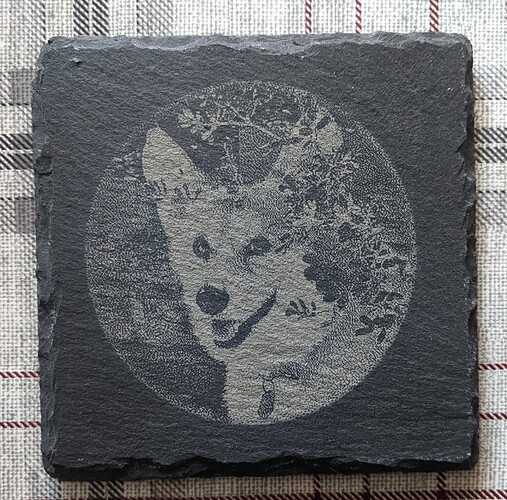 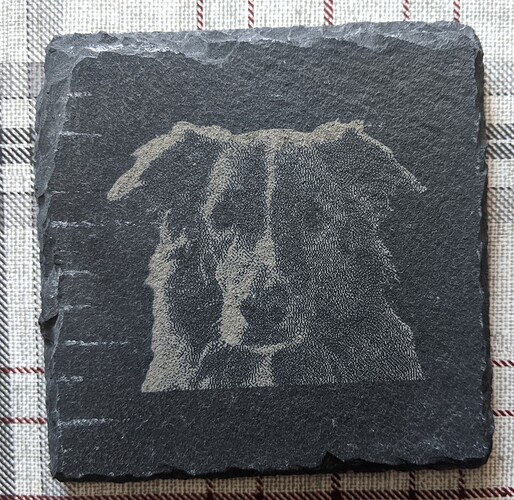 It’s not kosher to post the same question more than once.

At what part of the process does Lightburn appear to fail?

From the photo you are ‘shrinking’ it to get multiple copies on a single coaster. In simple terms it changes the dpi of the original.

I doubt other programs work as well as Lightburn. You might want to go through the steps you are taking for your results. Many people, including me use Lightburn for slate… tricky material…

I would think you would get better than you are in the photos.

As @jkwilborn points out, best to keep a single post for this issue. I have merged together to help others find this feedback.

Lightburn results in a filled in faint image regardless of what settings I use be it leave at default or try every mode available.

I made the image small as I listened online re testing small, so the multiple images on one coaster were individual attempts.

When I import the image into Laser Box it immediately engraved correctly albeit with dots that I have found was because I set DPI to 300, but setting to 96 results in good output.

I like Light Burn (still in trial period) so desperate to see slate output work.

These are the three results when doing single full size on coaster. The one incomplete was yet another lightburn attempt. The one with visible dots was very first attempt in laser box and lastly the correct image in laser box with DPI changed from 300 to 96 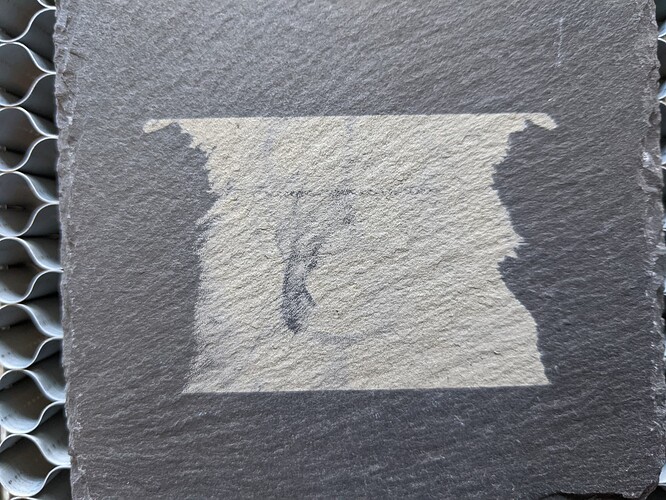 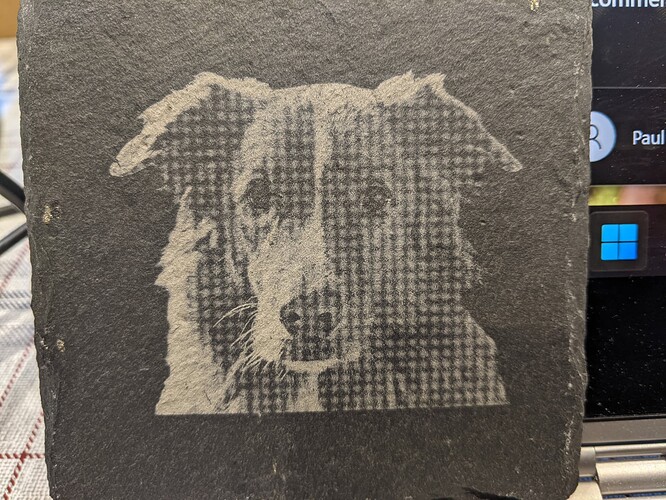 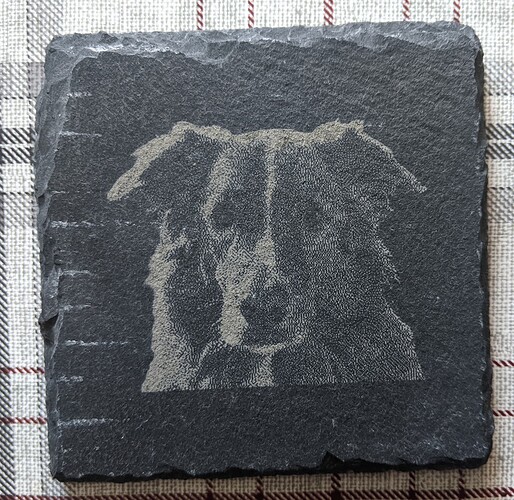