While it worked fine for several months, now my laser stops during “fill” burn. It’s a repetitive project that has only recently begun occurring. The shape is simple and small and it occurs regardless of speed or power settings. I’ve cleaned the laser lens, the USB connections, and reinstalled software. It just stops (laser off, doesn’t return home) and the timer continues to run. This is the Console code:
Starting stream
Layer C00
�k�H�ok
It STOPS after this so I click “STOP”
[MSG:Pgm End]
Stream completed in 0:44
Grbl 1.1f [’$’ for help]
helpme.lbrn2 (11.0 KB) 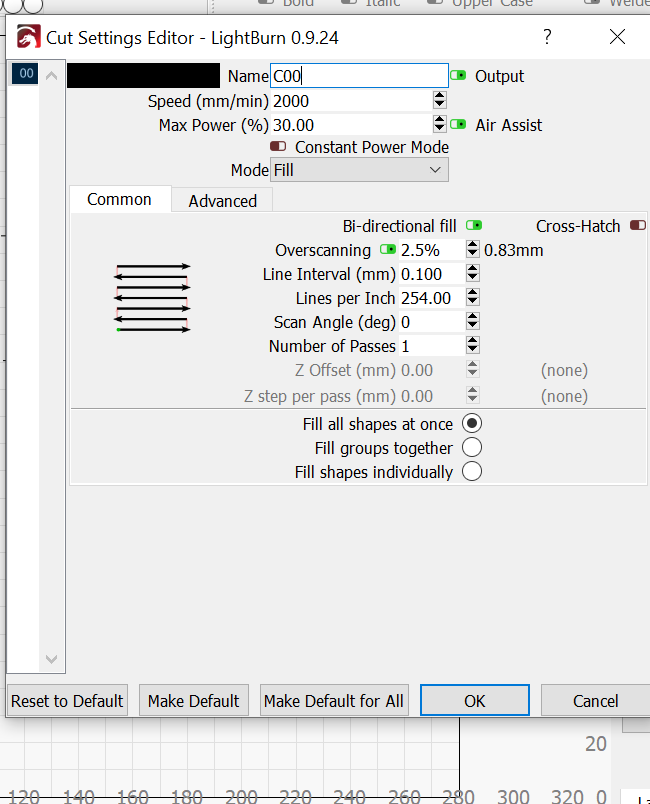 Please, can anyone help?
Thanks in advance,
Doug
ok

Hi Doug, I had a similar issue a while back where my machine would stop part way through and would still be counting up as if still working on the job, and it wouldn’t respond to commands. In the end my problem was interference from a failed limit switch(Which would actually still home correctly but once the laser fired it would fail the job), after I disconnected it from the logic board my laser ran perfectly. Your issue might not be the exact same but I would wager on some form of interference.

Thank you for your help. My laser doesn’t have limit switches. Later this week (as time permits) I’ll try the laser with my CNC router to see if it experiences the same problems.
Thanks again, Doug

Don’t know if this helps but I just experienced this same issue today and it turned out I had two instances of Lightburn open at the same time. My guess is that this was causing a fight over which one controlled the com port.

I’ve just finished restoring my computer to factory settings & reinstalled LB. I’ll be able to test it tomorrow to see if I have two copies running at the same time. I’ve also installed the laser in my 3080 router to see if it will duplicate the error. Thanks for your reply. I’ll post the results in a couple of days.
Doug

Hello, I have the same problem, díd you solve It? Thanks you.

I don’t know because I threw the Two Trees away & bought the Ortur LM2 Pro. Haven’t had a problem with it at all.

Thanks for the info. I just díd the same, i bougt the atomstack p7. M40.
About my Twotress Tótem S 40 w If i find a any solution I give you feedback. Thanks again.