I’m playing around with picture engraving. I’ve got some weird horizontal banding going on here and not sure where to start troubleshooting. 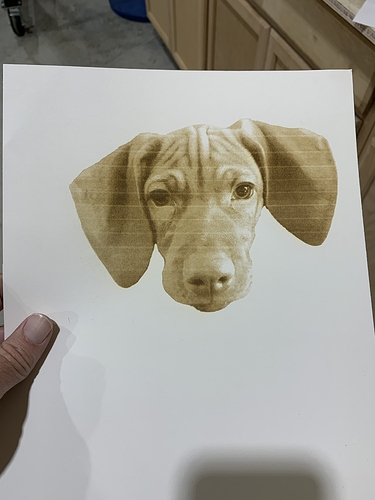 This is a Chinese laser (from Rabbit) with a 600x900 bed. Ruida 6442 controller. 60 watt tube (that’s brand new). I brought the image into lightburn as an original color image. I used the “dither” setting set at 450 dpi. Engrave was done at 13%, 60mm/s. The distance between the bands isn’t consistent nor are the heights of the bands.

Here I tried on some different card stock and reduced the size of the image so it wouldn’t take as long. 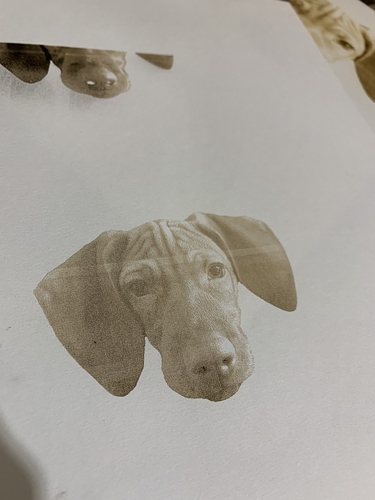 Do you have a compressor or chiller that kick on periodically? If so, pay attention to when, and they’ll likely correlate. Anything that pulls power from the line that the laser PSU is connected to can cause this.

Ding, ding, ding. I think we have a winner. I’ll have to go test it but yes, I do have a compressor on the same outlet that is periodically cycling. Thank you very much! I think I’d have been pulling my hair out a long time trying to figure that one out.

Winner winner. No compressor, no banding. 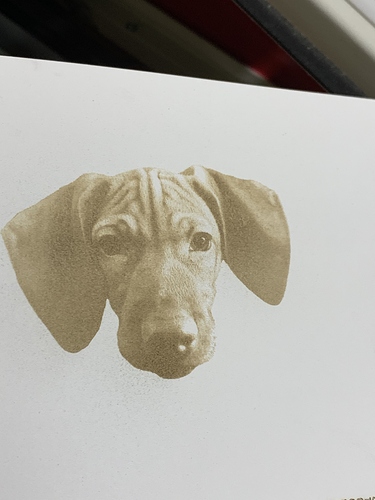 @travisr100 Do you use the compound lens that Russ uses? If so have you experimented with his magic 240dpi output at the .1 mm ?

I did get his engraving nozzle from Cloudray and I used it on the images in the posts above. That last one without banding was done at 254 dpi. The first one with the multiple bands I calculated I should have been able to do 846 dpi with a .03 dot but I ran it at 480 dpi if I recall correctly. I think both turned out very nice but i haven’t taken the time to really try to analyze them yet. I was more concerned with getting the banding resolved and getting the camera set up last night.

See this post for a photo of the dots…

Just ordered one! Russ is the man when it comes to educational videos. I had the exact same sentiments as you @travisr100 regarding his loupe. I like that his was made of metal. Cheers and Thank you @travisr100 Sasquatch

I also ordered some card stock similar to what he uses and that’s also used in the images above.

That last one without banding was done at 254 dpi.

The Golden Dpi is 254 I incorrectly said 240.
@travisr100 what was the material you engraved on? Was it the watercolor paper Russ uses or was it wood? It looks like thick paper from the images.

Wow. That right there is called experience! Looks like you nailed it too. Amazing.

Yep, wasn’t the exact same paper but was actually a slightly heavier weight watercolor paper. Was this…

Thank you so much

Did the paper remain flat? Or did it want to curl on ya

Did you use magnets to hold it down?

It’s pretty good about staying flat but I used magnets anyway. And no problem.

If you order this paper, one thing to note is that it’s all stuck together at the edges and is a little difficult to separate the individual pieces. It’s like they stacked a bunch of sheets then painted the edges of the stack with something like a rubber/wax if that makes sense.