Searching the forum first I found a couple reqs for the same. Understanding the difficulty, it would be quite nice to be able to visually check/pop through all variations to checkup on the data.

I didn’t find a better way to +1 the request so I thought I go with a new post.

Not to prescribe a solution, but also to … if the act of editing the content of a bound field flipped off test/preview, then perhaps you wouldn’t have to worry about the state of the field?

Likewise, a couple of shortcut keys to enable Test and to page through records (lt/gt since the icons mimic those?)

Please make the Variable Text “Test” button a toggle. Others have asked, so I am again. Since I found no other means to give notice that I would also like this feature, I added this post.

In previous posts, the pervasive reasoning for not delivering this feature was around what to do with the text field that had variable text fields when “Test” was enabled. I suggest the act of editing the text in a field immediately disable “Test”. I suggest this in absolute ignorance of the internals of the software.

The “Test” button currently does toggle but it’s considered a Momentary switch, i.e., it only holds that state as long as the left mouse button is pressed. (If you hover over the “Test” button its flyout detail reveals “Briefly show what the evaluated text will look like”.)

I believe what you may be requesting is for the Test button to be a Maintained switch where it stays in the state of either On or Off without having to hold the left mouse button. It simply stay in one or the other.

Furthermore, if the variable text is currently in the “ON” status, then once you make changes to the text, you would like for the Maintained state to automatically change to “Off” and stay in that state.

I do like the idea of having a shortcut key too.

Are there any place holders that can
be used with variable text? We were using this feature to import a football roster. The first column was easy it was just the players number. The next column was the players First and Last Name. This repeated 4 times total of 8 column. It was hard to get the correct spacing. We had to TEST and then move the text column over so some of the names would not overlap. I am trying to find a way to make place holders for the longest name. This would allow the alignment tools to be used. I may have overlooked a built in feature. Please Help. 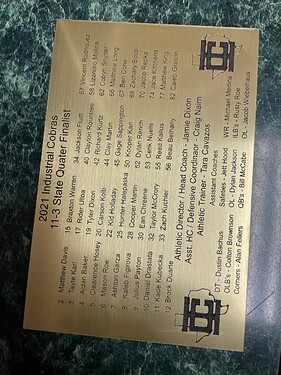 Hate to point it out but someone misspelled Defensive “Coordinator”.

Have a feature you'd love to see in LightBurn? Suggest it here. We actually read these things. Please be specific, and include the type of cont

I thought the PDF one might work for you and if so, vote it up.

If none of those are what you’re looking for, you can submit the precise feature request that you want and encourage others to vote for it. Some of the high demand ones happen fast / next release.

Have a look at some of the release notes on the news page. They sure do pack a lot into an update.