Installed the 2nd version of 9.20 and when I select file open it will open file explorer and then hang up. Get an error LBFileDialog.exe is not responding error. I wait a few minutes and nothing happens so I close program. When file explorer closes it takes me back to Lightburn program. This LB program is not responding and will not let me select any menu items or close with X. I have to close from the task manager. I tried a system reboot. This happens last 4 times I tied to open a file.

Going to revert back to previous version so I can complete orders but can reinstall 9.20v2 if you needed to help figure out the issue. 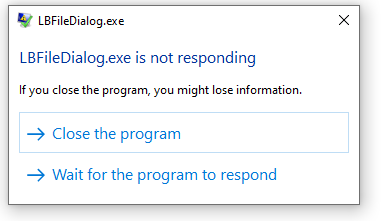 I reverted back to the original 9.20 and had no problems with opening files.

That’s bizarre - Nothing to do with that was changed in the 2nd patch. The change was about 5 lines of code in the system that loads and applies the camera calibration values, and that’s it.

Finish your orders obviously, then when you have some breathing room try uninstalling the version you have and then installing the new one, and let me know if you’re still seeing this.

If I do an uninstall vs update will I loose any of my settings? Do I need to save any files before I uninstall?

I just started my trial at v9.20 a few days ago. The next time I started LB, the next day actually, I was notified that a newer version was available v9.20…I downloaded and installed that one. Yesterday, when I started LB I was offered v9.20 again for the third time.
I’m assuming that this is “normal” since it seems to happen every time I open LB.
Other than that little quirk, I’m loving it.

No Kevin, this is not the normal procedure, Lightburn does not ask every time at opening if you want to update. However, LightBurn is constantly being corrected and improved and if it turns out that there is a more important correction or a new error which is the result of a correction, it will be announced in this way and the improvement / correction will be offered. (This is how I perceived it as a normal user of LightBurn)

Uninstalling won’t remove settings, so you don’t need to do anything special.

And Kevin, the updates are actually patches to the version you have - small, but important bug fixes that we didn’t catch before the release. I don’t like doing it, but I’d rather fix and be slightly annoying than not fix.

Bernd and Oz, thank you both for your responses.
I’m not at all annoyed, my comment was only intended to find out if frequent updates were normal.
Honestly, I’m glad to know the code is getting frequent tweaks and tune ups.

I certainly did not feel anything annoying about your question, everything is fine.

We could probably update more often than we do, but there’s a balance to be had. We try hard to release new features relatively often, and make sure they’re tested well, but the number of different machines and configurations supported makes that challenging, so sometimes a patch is necessary.

We’ve had a few people in the past take issue when we patched an existing version rather than give it a new number, just because unless you read carefully, it looks like it’s telling you there’s an update that you already have.

I’ve gotten the same thing for the past few days since I upgraded to the latest version. I just thought you all were pumping out updates on a daily basis. I’ve installed the new version offered the last 2 days. Today I got suspicious and found this post on the forum.

I’ve gotten this message also. Newbie here and I installed 0.9.19 and a couple days later got the message that 0.9.20 was available. I downloaded and ran the update without a problem, my application title says, 0.9.20, but then I still get the popup saying “An update for your version (0.9.20) is available - would I like to update”
I’ve gotten this on the three machines I’ve downloaded to (one is only a demo license that I first downloaded on my laptop) so it appears to be consistent.

OK, thanks for explaining this. I assumed that since the version number hadn’t changed it was incorrectly reporting the same version as a new version. I will hence forth trust the new version alert and install!.

And I just have to add that using LightBurn has made it possible to get repeatable results from my engraver even when I go back to an older project later. It saves everything needed where other software I had to note “speeds and feeds” and such…

Plus I have to say that the forum support is AWESOME!!! Both from Oz and from other users. And Oz didn’t make me feel like a moron!

Not my thread but thanks all!

If you get the pop up, do the update. Trust it.

If you get the pop up, do the update. Trust it

Thanks, I should have read your earlier posting more thoroughly. I didn’t quite catch that it was an update without a version number change.

I really need to change the text in there to be:

"There is an update for the version you are running right now. I know it has the same version number, but it’s really actually different and fixes a thing that was broken!"

Unfortunately the German translation for that likely wouldn’t fit in the pop-up box.