I’m new to Lb, so I’ve been doing a lot of tests to help me learn. I’m pretty well set now on some of the parameters, but have the issue shown in the photo below: vertical lines the the burn. The three blocks are done at 100%, 80% and 60% power. I have a 2.8w laser module. 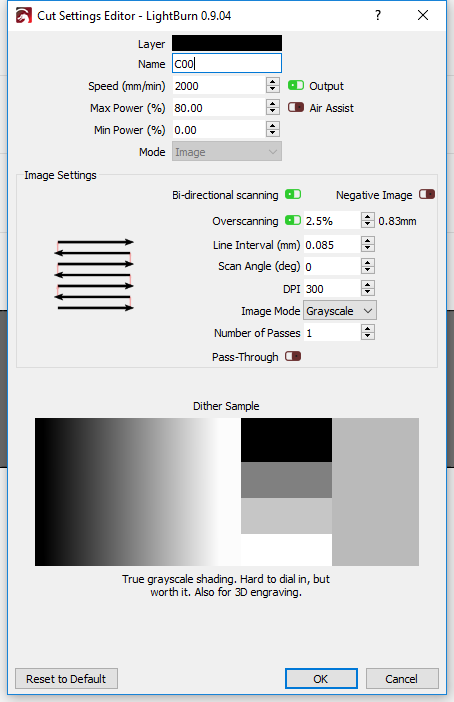 Since this is a DIY machine, my first thought would be something causing the X axis movement to bind, either a belt being too tight or too loose, debris on the rails, rails not being parallel, or something along those lines. Try changing the Angle of the fill and see if the lines remain, or change in character.

To clarify my configuration, my X axis is parallel to the rails; Y axis is the gantry. My rails are parallel. I tightened both belts and got them as even as I can. I re-ran the graduated image at 5°, 45°, and 90°. The lines were less noticeable at 5°, but still evident at 45° and somewhat at 90°. Now that I’m trying to track down this issue, I’m noticing a slight vibration as the gantry moves along my X axis when driven by the motors; it feels smooth when moving it manually.

You might need to adjust your motor currents, or increase your micro-steps. If the motor current is too high, it can cause snapping into position as the system moves, instead of moving smoothly from one step to the next. Certain speeds may be more prone to resonance than others, too - try increasing the speed 5mm/sec (or decreasing) to see if the effect lessens at all.

I’ve used Octoprint on my 3D printer for a couple of years and was interested to see a laser plugin for it. I added the Laser plugin to Octoprint on my laser engraver and like what I see - with an exception. I was seeing artifacts in a photo I was test-printing, then saw more definite lines when printing a gradient image. I went through steps of eliminating different parts of the communication path to determine the item causing the issue.

My system consists of an RPi3 feeding an Arduino/BOB unit to drive the steppers and a laser driver module to operate the laser itself. I bypassed the RPi to start with and got smooth prints. Then, I set up two SD cards - one with Octoprint Laser and one with bCNC to further drill into the cause. It turns out that the print discrepancy only occurs when using Octoprint Laser to feed the gcode to the system. Attached is a photo showing the result using Octoprint Laser on the left and bCNC on the right.

Bottom line: Running the gcode generated by LightBurn using the RPi/bCNC feeding my laser provided a smooth image, as does bypassing the RPi and running the laser directly from LightBurn on my PC.

That’s very strange - I wouldn’t have suspected the sender itself of causing those, as it should be passing the GCode straight through without issue. Were you sending from LightBurn to Octoprint, or running stored GCode?

I saved gcode from LightBurn, then loaded it into Octoprint and ran it.