I’m having some issues with the alignment of my homebrew laser. (size 150cm x, 100cm y )
I followed the guides and used some common sense to get everything aligned.

Works well, except for one thing: I can only get 3 out of 4 positions (A,B,C,D) perfectly aligned where the beam hits mirror 3 at exactly the same spot. At the fourth position, the beam is as much as 5mm off in height at mirror 3.

Tried everything, realigned, different sequence for alignment, etc. The only thing that happens is that the position where it’s off changes between A,B and D.

I thought: perhaps it’s twisted: the Y rails not perfectly parallel. But that’s not it. I actually made it non-parallel on purpose, adding some shims to lift the rail 3-6 mm at position a/b/c/d and went through more rounds of mirror alignment, but the offset remains the same.

It’s driving me bonkers. Any Ideas? 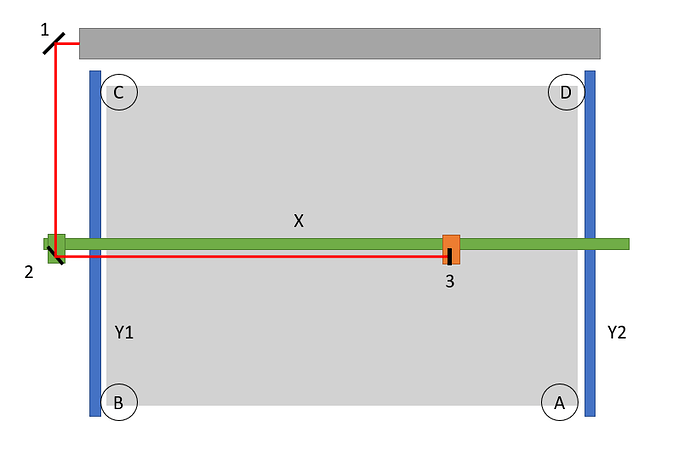 This may not be helpful, but I’ll toss it in here so you can determine on your own. My redsail clone would not align no matter how hard I tried. All the tutorials and messages in the world didn’t help, even though I’d follow them to the letter.

I created a sleeve to fit in the lens tube (lens removed) that would hold a laser pointer, with the button in the on position. Stuck it in the nozzle, so to speak and centered it on the #3 mirror. Adjusting that to hit the #2 mirror was easy enough. Getting from #2 to #1 was nearly impossible.

I then discovered that the #2 mirror mount had been mangled during assembly/shipping/somewhere and removed it, un-mangled it and continued. From that point, getting a centered dot on the #1 mirror was easy enough.

Returning to ordinary configuration, I hit the pulse button to mark the target and found that the #1 mirror fires right at my shoulder. Yikes. That’s unrelated to your troubles, but unforgettable. I then cranked the #1 mirror to get it at the end of the laser with the red dot.

I’ve been chastised in another forum that this method is not practical, but it helped me find and correct the problem.

The advantage is a live, always on pointer/reference that lets you see what’s going on. Another thing that happened in my situation is that I discovered that my laser tube had to be aligned slightly in the vertical plane.

The mirror adjustments are mostly for horizontal adjustment and the movement is mostly horizontal on the gantry and carriage, but if the laser is wonky (technical term), you’ll be chasing the burns all over the place.

With the reverse laser system, you can be assured that your alignment has a foundation from which you can begin to fine tune the calibration.

Hi, thanks for the info. I’ve been thinking about doing the same thing. Though in my case, I suspect it’s related to the frame not being stiff enough so something moves or twists. Can’t think of any other reason why it would do this if the aligment between mirror 1 and 2 is next to perfect.

a photo of your construction would be helpful, the more the better.

On my machine, the cable channel pulls the laser head up slightly when the laser head is furthest from home. I know it and have no problems with it in daily work. But if it is to be 100% accurate, then I stay away from this end of my table. Russ has made a video on the subject but I don’t find it anymore.