What was your longest run?

I have a K40 laser that I’ve had since April and I have basically been using it every day. I really am enjoying this thing! I have upgraded the board to a Cohesion3D Laserboard. I am using a Harbor Freight air brush compressor pushing air into a LightObject air assist head. I also upgraded the mirrors a little to some better quality Si plated gold mirrors. I had a better water pump to use in a 5 gal bucket with a temp probe mounted on the output stream. I use ice packs to keep the water temp at 68F or lower while in use. Oh and I ripped out the stock bed and cut the exhuast inlet back to give me a max working area of 300mm x 230mm.

Lately I have been trying to perfect my greyscale engraving skills. I take a .JPG and run it through Photoshop. I change it to a 16 bit greyscale image and do all my other stuff to it to get it laser engravable.

I usually engrave my pictures at a slow 30mm/sec to get dark burns in my Baltic Birch 12in x 9in plywood without really digging into the wood too much. The MA’s usually hover around 4 to 5. I have an arduino uno connected to the meter to output power percentage to a little 2 color lcd display and that shows 6%. I am using 16 bit pictures so I run at 100% power in Lightburn to get the most shades of grey possible.

Now the purpose of this lengthy equipment rundown is to give a little background on my setup and to ask a question. What is the longest run in one shot without pause that you guys have done? I just printed out a picture that took up the whole 12x9 inch plywood and it took 546 minutes (9 hours) to print. That was the longest I have ever continually run this laser in one shot. Of course I had to change the ice packs out every hour and a half or so to keep the temps below 68F. Is this too long? Am I going to burn up the tube? I have never noticed any loss of power during to print but I wanted to get you guy’s opinions and find out if anyone has beaten my record!

Funny that you ask. I am currently working on a 3D engrave of a lake bottom. Each layer represents a contour line and there are 52 of them. My table is 600 x 400 and I am cutting on MDF because of lack of grain. (would like to learn how to work on grained wood.) My tube is 180 Watts and I’m cutting each layer at no more than 400mm/sec Probably will drop it down to 200 so I can get closer to the edges. I have done it at 1000 mm/sec but that caused the steppers to slip during the job. Bummer after hours of work
LightBurn preview on this new setup say it’s going to take over 29 hours.
That said, I do pause the work sometimes to take a wire brush to the ash buildup.
As far as cooling I have a hydroponics water cooler that I picked up in a pawn shop for 50 bucks and don’t need to change ice.
My biggest problem is that the smoke from the MDF settles on my fan intake vent and plugs it and also gums up my fan so I have to take it apart and clean it more frequently when I do this type of work.

Holy crap. 29 hrs! That’s awesome. I tried working with MDF but I could never get the settings right. I was thinking of trying to do a 3D depth map picture this week using some. That was a good deal on that cooler too. Well so far you’re in the lead at 29 hrs! Post a pic of the engraving when its complete. I’d love to see how it turns out.

Why not do the entire thing as a single shaded image, instead of 52 outlines? That would allow it to be done in a single pass (if the power was high enough) or at the very least reduce it to a few passes of identical power.

That was the exact post that got me wanting to try the 3D engraving on my K40. I’ve accidentally done it not wanting to when I first got the machine. It still had the Nano board in it and I way overpowered an engraved picture. It darn near burned completely through a 5mm thick piece of plywood! 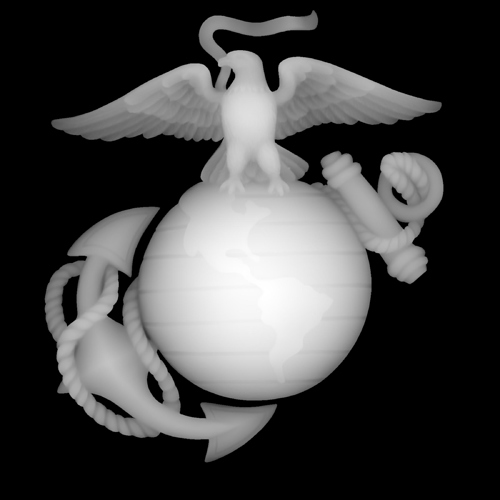 I’m going to try to 3D engrave this.

Here’s a failed one after which I changed controllers so I could use LightBurn. 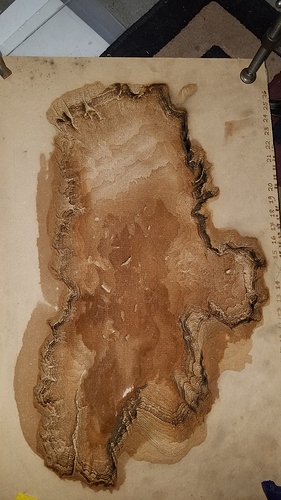 I tried that. Turns out the high power blasts just charr the wood. So I do layer by layer so as to keep the cut depths mostly uniform. I also have to watch the depths near steep cliffs if I am using a 1.5" lens as the cone bumps the wood. Not a problem with a 2" lens. I haven’t got back to the project until a couple of days ago. I am also designing a 3D printed mirror 3 and lens holder that takes gives me a nearly 1.5" of clearance below the lens while keeping air on the lens to keep it clean. We’ll see if I need it after this next attempt with LB. Just need to find time.

Awesome. Yeah I have no idea why they limit the size capacity on these things so bad. Its crazy. What has been your longest burn or engraving yet?

So far my longest burn is only 4 hrs. (very short compared to others).

I always try to keep my cooling water between 20-25 Degrees Celsius while burning. I regulate the temperature by adding or removing a 1 gallon jug of frozen water as needed. While its extremely important to keep the laser tube cool, it’s equally important not to let your laser tube develop any condensation (too cold).

I to believe we can use the laser 24 hours a day. I believe several important parameters needs to be maintained to achieve longer than normal burns.

Hmmm Thanks for the warning about condensation. I never knew about that. At what temp does this happen at generally? I guess it would be a percentage of the difference in temperature of the tube vs the water so that is a non static value. Is there a warning sign that it is happening? Or maybe I could setup a webcam utilizing the camera setup within lightburn to monitor for condensation on the tube. Does lightburn handle multiple cameras in the software? maybe offering multiple windows for them? I run a 3 monitor setup on my PC in my “maker studio” so that would be so cool to have a camera showing the tube doing its thing while monitoring it for any problems.

As far as Lightburn’s ability the run multiple cameras, I’m not sure if that’s possible.

Another big benefit of having a chiller is stable laser characteristics. The tubes power output varies with temperature, so if you keep it at one temperature you’ll get more consistent cutting/engraving.