When you ask too much of ZnSe material

Well, this went badly. This is a custom laser all around, and I’ve been trying to keep the beam small. Energy density is about 2.2KW/cm^2 at the lens. Which- no, you’re not supposed to do that, but it was using one mfg for the lenses and they each lasted a long time (until something skunked them with smoke and they cracked). In fact working REALLY well. Then tried another lens mfg and the first one didn’t last all that long and failed in an unusual way, but I thought it might be an alignment prob.

I don’t think this mfg is “worse” for normal use. It’s probably marginally less for damage tolerance and I pushed it just a bit too far. But probably not an issue for anyone else.

By “unusual”, I mean the beam cut a hole straight through the lens, and coated the interior of the head and #3 mirror with a crazy orange dust (I washed my hands really carefully after this one).

Then the second one from this mfg failed in a few hours, in the same way. This one has every indication the beam hit it dead center and was NOT dirty. I looked really close- the margins are clean, no trace of anything but that orange dust. 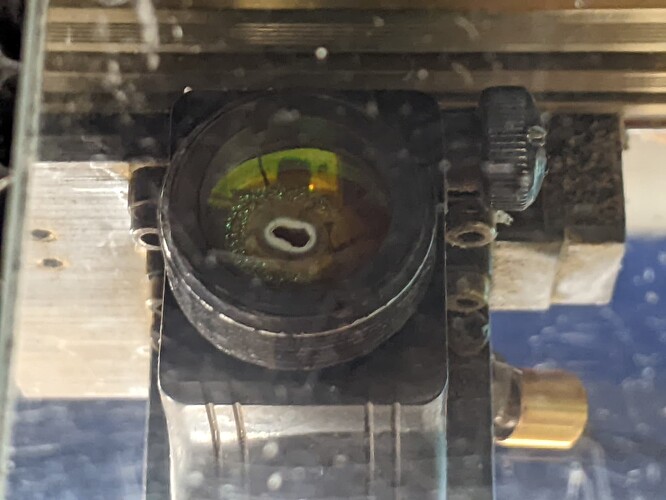 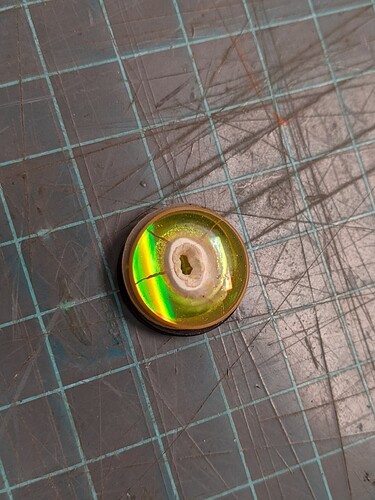 Alderaan really dodged a bullet today. We’ll be back.

As far as the #3 mirror is concerned, though, even though it was totally skunked, it almost entirely cleaned up. Because this mirror is molybdenum, which is nearly indestructible. The earlier gold-on-silicon mirror did NOT do well there, it got some smoke on it and the gold boiled off. Like weird blister-bubbles.

Did you get any kind of noise/smoke when this went? How much power were you pouring through it? Saw the power density, but what kind of power was your machine putting out 200+ watts?

I wasn’t using it at the time. Makerspace. I had someone report a problem with cut quality and find the lens was gone. I mean, the periphery still exists, but it’s no longer part of the system when it’s been drilled through and the margins of the borehole are opaque.

This is the crazy orange dust. It created a smooth, featureless powdercoat inside the head. This tube is black anodized aluminum on the inside. 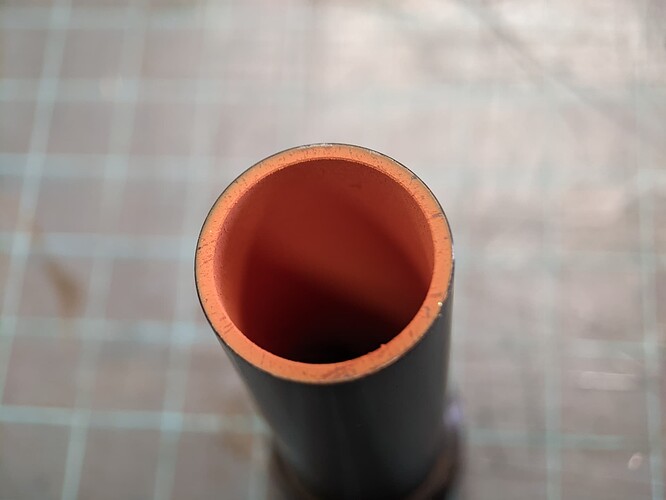 Here’s a pic of what it did while cutting. You can see where the lens exploded and the air assist spit out orange dust on the work- but since AA pressurizes the cone under the lens, it’s mostly blasting the air upwards through the hole.

That does mean that the line after that is cutting without a lens and the AA cone orifice is just a clear aperture. The raw beam power is still trying to cut, notably wider and obviously not going to make it through- but it’s trying 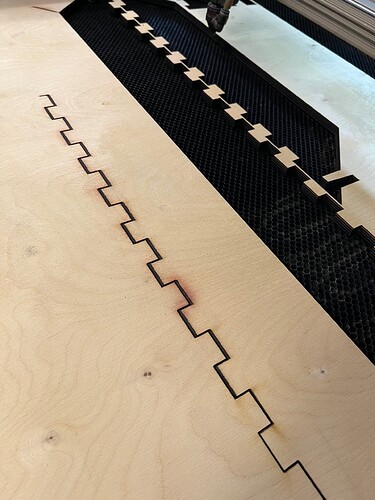 Did it coat the whole inside of the head with that orange stuff? Wonder what it is…

The WHOLE thing was coated. It stuck, it wasn’t airborne.
The optic is ZnSe with a thorium coating. The coating is of negligible mass, this is all zinc and selenium. Both zinc oxide and selenium dioxide commercial powders are WHITE powders when googling products.

Oxidation state? Zinc has only one, and it’s white.

Selenium can be -2, +4, or +6 oxidation states. Amorphous selenium powder is red, +2 can be pink or blue. Probably seeing the amorphous allotrope.