Which Lightburn Camera (5 vs 8 megapixel) would you buy?

I have just purchased the BOSS LS1416 (bedsize (500mm x 350mm). I see there are 2 options for the cameras that Lightburn offers.

I intend using the camera to set my pieces on the bed and ensuring the artwork is adjusted perfectly i.e. a circle is dead center if the object is round, etc.

I personally would go for a camera with more resolution unless for some really weird reason that would not benefit me. I am not sure if there is any information, try searching on this forum.

On the point of a non Lightburn camera there are issues, while I did install the same camera as a lightburn one it does not have the same resolution as Lightburn have had their cameras altered. I am not a 100% sure what it is but its something to do with Windows defaulting the cameras to its lowest rez I believe .

as far as I understand you dont get this problem with a lightburn camera and the image is sharp as against mine. It was the same camera , I believe even the same supplier( according to their info online) just not tweaked like Lightburn’s are.

Forget the Logitech camera I have the same one and while it works its not ideal, to big and in the way etc. The camera needs to be small and easy to place and not be moved etc. The camera Lightburn sells is tiny and easy to embed in a holder or even just stick it to the metal work.

Once my upgrades to my K40 are complete I will be getting a lightburn one, I have got mine to work and what it can do is exceptional for alignment and for me this is the biggest selling point of the camera, not the ability to take a photo of an image, thats a side issue, the alignment by far is the best point, with this you can run a line of text down a row of 20 pencils in a jig without any problem at all.

However while my camera does works it has not got the image quality of Lightburns. Yes they seem expensive but if they work and do the job then in reality youll get the investment back after every use of it.

Thank you, thank you, thank you, you have cleared up a doubt I had about whether “other” cheaper and “normal” cameras would work instead of a LightBurn one, but it is obviously worth paying the price if you can efficiently align elements with the laser in return.

Now it is clear to me that the LightBurn camera is worth buying.

Thats Ok, I just feel all the effort the guys and gals put in to making the software work is worth paying a little bit more for a camera that you know is going to work and thats been tested.

That way you know you wont have any problems and if you do well its their camera and they will sort it our on the forum for you until its resolved.

What made me decide was this video, It instantly focused on what the camera was about.

Its really should be there goto video for an explanation on the camera as the one Lightburn use its a bit old and really out of date, if people saw this first they would buy lightburn without any hesitation. I know Oz is going to update it at some point but its a lot of work to re do video tutorials ( an dead boring)

Watch this and any reservations you might have will disappear. Lightburn should give him a free renewal for giving them a brilliant sales video.

Lightburn Camera Video WHy & WHAT for

One thing thats is not that clear on setting up the camera in my opinion is the actual calibration of the camera, it just didnt gel with me and i had to ask and that is you do not need to mount the camera in the machine to calibrate, it can be anywhere, so for arguments sake when you come to calibrate the lens stick the card on a wall and point the camera at it at roughly the right distance, trying to calibrate in the machine was a nightmare on a K40, once I did this it was perfect first attempt, before that the scores I was getting were crap.

Also do the calculation to make sure you buy the right camera, its in the help menu in lightburn itself.

Anyway have fun and remember that where you place it is quite important as it will get covered in crap and fumes from the smoke, i keep the little lens cover that came with mine on the camera all the time I am not using it.

Apart from that it is probably the best thing Lightburn has for alignment in its toolbox.

Hi @spiritburner - thank you for your detailed response and experience on this topic. The video clarified my questions and helped me to make this decision - this is exactly the application I had in mind.

@lightburn admins - you should give these guys some commission for their great responses - I’m sure its going to go a long way to help many users.

All set to go - now for the shipping to get here ! 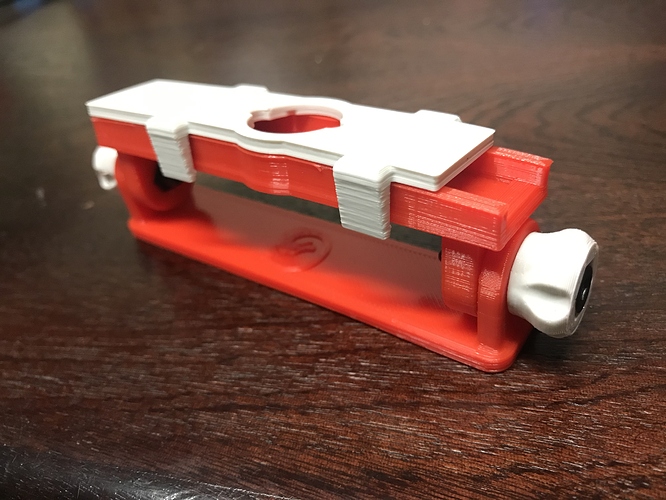 looks good, have fun when it arrives, i spent ages playing with it to see just how small i could align and well its amazing! As I said one of the best tools in the box!

So we have a 1300x900 bed size. I keep seeing that the camera needs to be mounted looking straight down at the center of the bed when open (right in the middle of plexiglass window of course rather than on metal part of door) and the measurement to be used in determining the appropriate camera should be from this point to the bed. The measurement I got was 850mm height. According to the help/camera selection tool, it looks like there could be a few choices
5MP 120deg that is at 867mm min height (REALLY close)
5MP 140 deg req 720mm and a
8MP W 110deg req 667mm

Can someone confirm definitely needs to be at Top dead center when lid is open and if so which camera would be ideal?

my camera is only at TDC when the lid is closed and that means that my lens is about 10 cms away from the object which is why i went for a very wide angle lens, although I am about to upgrade my system and I will change the camera to be higher than this to obtain a better resolution photo as the wide angle is just too wide.

Have a look at this video below and see where the camera is placed on this one, It might give you a better idea on placement.

To be honest unless you want the alignment facility to be all over the bed I would put the camera where it is best for you, once calibration has been carried out on say a flat wall with the camera looking at it it can be placed as I understand it anywhere you really want. TDC is for maximum effect but if you cant do that youll have to place where you can to get the maximum coverage.

If you only want the alignment feature in one specific place say the centre of the bed or one quarter of the bed then aim the camera for that point. There is no reason why you have to have the entire bed captured, its only so that you can align everywhere on the bed,

I have found though as you get towards the edges of the camera on a wide angle lens the alignment is not so good anyway. then again I am not using a LB camera.

If you cant place your camera in a TDC point then try for another point where you can mount the camera and then use that area for engraving, In use I have found that you tend to use the camera for alignment of specific items such as a logo or brand name along the edge of a particular object and that is not necessarily the full size of the bed anyway.

This video will show you where the user has placed his camera to capture the bed on a larger laser.

Thank you for your reply. The video does show the mounting near the edge of the lid, but he also said part of why he chose that location was because it was closer to the center of the bed when open. I am researching for our Maker Space and so there are a variety of use cases that need to be taken into account so I am hesitant to only consider a small portion of the bed. If I do put it on the metal part of the lid (front), it will be just a little bit higher and so might just be able to make the 5MP 120 degree camera work as I think it might be right at or a little over the 867 minimum height, but will need to measure

Thats ok, just letting you know my own experience, what i would do is hold on a couple of days for others to comment and see what they say, have you searched the back posts to see if this has been covered at all.

What i would do is hold on a couple of days for others to comment and see what they say, have you searched the back posts to see if this has been covered at all.

Thanks. I have tried searching and have read quite a few back posts, but can’t say that I have found a definitive answer or not seen sometimes conflicting info.

then maybe address your post to the moderators or OZ and see hwat they say and try and get an answer from them as they are the developers.

@LightBurn might you be able to provide some feedback on above questions? starting with “So we have a 1300x900 bed size” from 8 days ago? Want to determine whether we can mount slightly off-center on solid part of lid and trying to determine between a couple of cameras. Height would be slightly higher if mounted to solid front part of lid rather than DOC to laser bed.

At your size, you’ll want an 8 MP Camera.

So if you choose the 8MP W - 110deg, the camera will see 1600x900, so you already have room to shift in the X (assuming 1300mm is your left to right dimensions), and then there will be some extra unused border around the outside as a whole, because you are mounting it at 850mm instead of 667mm. So yes, you have some room to move around there since there is unused space around the edges.

Thank you very much