Which linux distro is best for LightBurn?

I’ve been very happy with it on my Ubuntu machine. Can’t think of a distro this is more widely accepted and is much more user friendly than something like Debian.

Run some ‘live’ versions and take your best guess

Thanks for your reply ,
Can you run Ubuntu with LightBurn and a “normal” usb camera? I ask because it irritates me that I do not have this option with Mint, which is otherwise my preferred Linux distro. (LightBurn goes down immediately when I choose a usb camera, I have tried 3 different ones, there are no problems when using the camera in Linux “cheese”.
Is there a special version of Ubuntu you recommend?
Thanks

I just have the latest and greatest

I have never run a camera on this machines usb for lightburn. My machine is in the garage and I’m in the house. I ran a TP-Link ‘bridge’ for a while that worked fine. However I found my Pi and loaded it with the lightburn software.

There is a ‘hack’ but it’s working on mine, as far as I can tell.

I haven’t actually cut much to determine how accurate it is.

I know the software is being worked on but are their plans to make it the most perfect solution available by having camera integration? I setup my LightBurn Bridge up today and it’s brilliant, the setup is fantastically simply and the functionality is perfect. Thank you for the hard work and I know I’m being greedy but as a Mac user it would be perfection with camera integration Do I need to send beer or coffee???

This is my Ubuntu 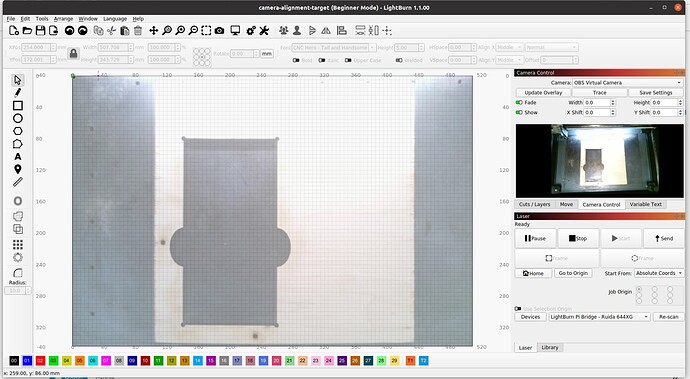 They are working to integrate a camera setup into the bridge sometime this year.

I have been following your post with interest.
It is a possibility but I hoped that there is a Linux that unproblematically handles LightBurn with a camera.

I’d guess Ubuntu would be the best bet. If I remember right it is the widest distribution that’s based on Linux. Don’t really know if it’s running in the commercial end of things.

Had a thought, I’ll grab the camera off the machine and plug it in… If it works here, it will work there…

I’ll get back to you asap…

I took the camera off my machine and brought it in here. Plugged it in, Lightburn sees it as “Video Capture 3”, but it’s just a black image.

It does work in ‘Cheese’. I can see it in Lightburn via the OBS virtual video. Same program, OBS, I use for the Lightburn Bridge. It’s pretty clear that it’s not getting though Lightburn without some kind of help.

Seems like some of these work and some don’t.

Read a few about it but didn’t resolve much. Lightburn has mention that the camera support libraries are not of their creation.

Don’t think I helped much

Hi Jack, thanks anyway, it was nice of you to test it for me.
I want to try if OBM is something I can handle with my limited linux knowledge.

I really don’t know how OBS works, as far as 99% of the options. I found it only via that link on how to use the camera via the bridge.

I’ve looked at it and it’s not really something I want to use.
Then I also have to wait for this Pi bridge, although I think an OS like Linux should also be fully supported by LightBurn.
Thanks again to you

Linux isn’t a locked down proprietary system like windows.

Windows has been known to have failures between it’s libraries ‘breaking’ some programs, their own libraries under certain conditions fail… I think I read a thread here about that occurring with a video stream on a windows machine.

A ‘free’ open source version of AT&T’s Unix. Being built that way there are many ways to configure the system with different modules for various purposes. As is the case with most OS’s if they wish to be useful.

I know about zero when it comes to how digital video can/needs to be handled, so it’s likely it isn’t properly configured, but I don’t know either way. It’s getting to the machine, but Lightburn isn’t able to deal with it…

I’m sure they are out there, but I don’t remember anyone with Linux based machines having problems simply talking to their controller via the usb port. Very common problem here with Mac’s and Windows, not Linux.

This has little to do with Lightburn anyway, as few applications actually ‘control’ the usb port and doing that would violate most security protocols.

Good luck with whatever you decide.