Recently I bought a PiBurn3.0 and last week I did some testing with it to dial in my power and speed which worked well and I got a great tumbler out of it. This weekend I decided to do some testing with some different graphics to see what looked good and for some reason I was getting a lot of drift in the X-axis. The strange thing is that Its worse with some fonts but not others. Here is a picture of a test I did. 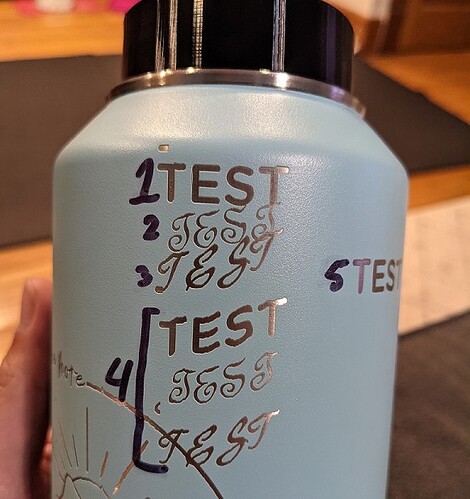 PXL_20210914_000417290582×619 111 KB
The numbers are the order that I engraved them in. I never touched the cup just did engraves one after the other. As you can see the 1st one looks OK but there is some shift in the T but the other tow there is a lot of shifting going in. Then I tested all 3 at the same time and they all shifted the same amount. Then I did a 5th TEST on its own again and it looked like the 1st engrave.
I did another test this time disconnecting the rotary and just using the XY gantry. I kept the rotary enabled in LightBurn to see if that was the issue and here are the results: 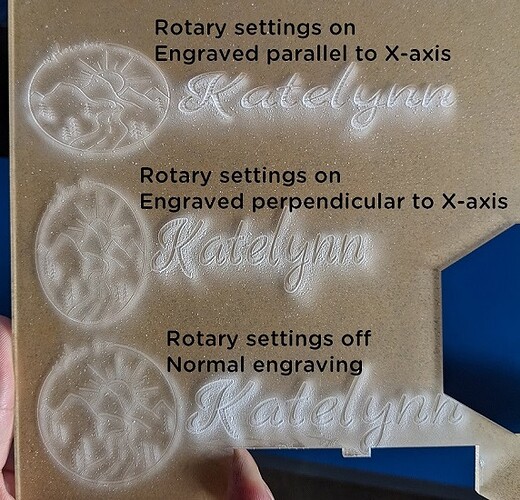 PXL_20210913_220228687573×550 147 KB
There is no shifting in the X-axis like when the rotary is attached. They is obvious distortion in the Y but that is to be expected because of the 2.5 gearing ratio that the PiBurn has.
I checked all the belts and they are appropriately tensioned. I don’t think there is any slipping going on since using the standard XY gantry I don’t have any issues.
I think it has something to do with the Rotary motor not being the same as the gantry motor and maybe they are getting out of sync for some reason. I used the laser during the week so maybe I accidentally changed a setting and that is causing the issue? I’m not sure. Has anybody had this issue or know what it could be?