Hey everyone. I apologize if this is long winded, but I’d like to give you as much detail as I can. I’m trying to do some double sided cutting with my Boss LS 1630 and lightburn. What I have noticed is that the further away from the origin (top right) I travel in the Y direction, my second side cuts drift in the X direction.

My test: I have a jig set up with an origin point in the top right corner where the laser is shown in the photos. I have aligned my jig so that it is parallel with the X axis. On the first side I line the sheet up so that the top edge hits the two small points and the right edge hits one small point on the white jigs. My program cuts a line in the top left corner in order to align the sheet in the x direction once it is flipped and then it cuts a series of circles that are held in with tabs. The first photo shows the sheet in place after the program is finished. Cuts are 15mm/s, 35% power

I then flip the sheet over the short edge and line up my cut in the corner with the tabs on the white jig. I also flip my program in Lightburn the same way. As shown on the second photo, I etch the star pattern in the upper right circle expecting that it will be centered and I am locating the sheet correctly. Then one at a time I turn on different layers and separately etch the star patterns in the corners and the lines of stars. For the lines they are burned in the direction of the arrow, starting at the arrow. Star patterns are cut at 200 mm/s, 20% power. The sheet is never moved through this process.

It would appear that as I get toward the bottom of the table, the stars are drifting in the X direction. I’m not sure what I am missing here. I have attached my machine settings to the post as well. This is what I have tried so far: Recalibrating the steps (this did help some initially), reducing the idle and max acceleration speeds to 500 mm/s^2 down from 2000 on a previous run, enabled/disabled “hide backlash”, turned on/off PWM rising edge valid. The laser head comes back to the same origin after every run. Rails are greased. Mirror alignment looks good. The belts seem tight enough although the bottom of the X belt seems tighter than it does on the top, not sure if that’s a problem. I don’t think that my fixture is misaligned because in general the stars do not look like they drift much in the Y direction. Any insight would be greatly appreciated! 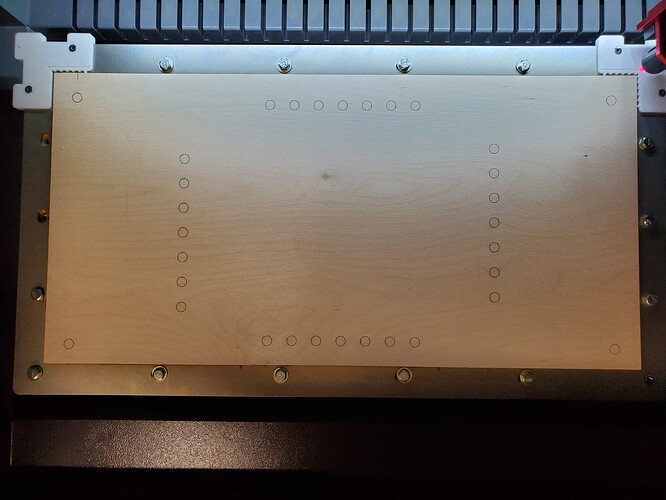 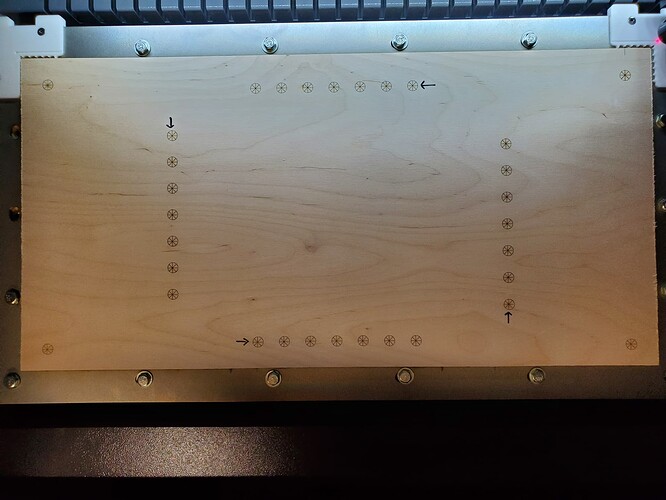 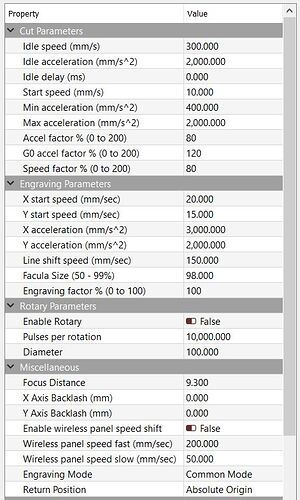 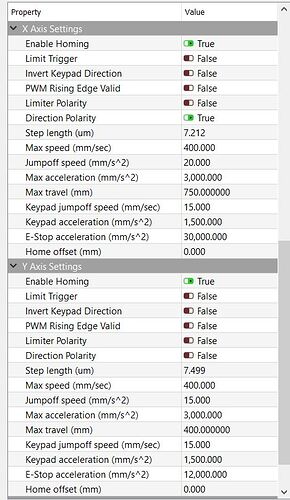