Does anyone have a good explanation of how the Z axis Offset works? If I my first layer is a fill layer and I have a Z axis offset of 2mm does the the Z axis move down (or up?) 2mm from where I set it before sending the file to the laser? If the next layer has a Z Axis Offset of 1mm does that move it down 1mm from where the last offset left it (i.e. is every offset relative to where the Z axis is currently at).

I have a z-axis in LB as well.

When you home your z axis does it move up to hit the limit switch, once there if you jog it in the move tab which way does it move when you hit the UP arrow?

It moves up with the Up arrow

I can only show you how mine is setup, it may not be the right way but it does work.

My x-axis moves up to the limit, that sets it at zero.

I have the following settings 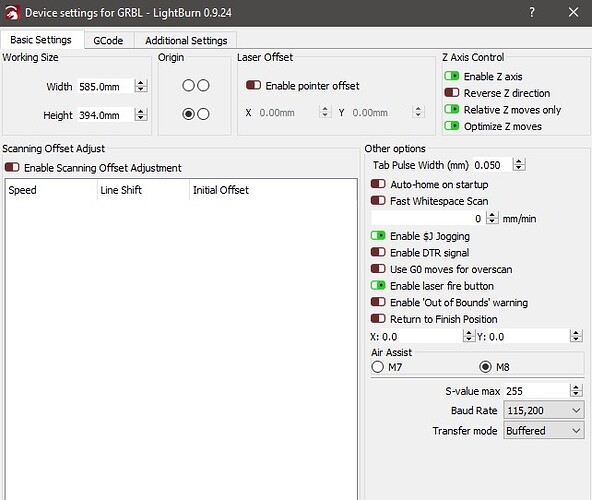 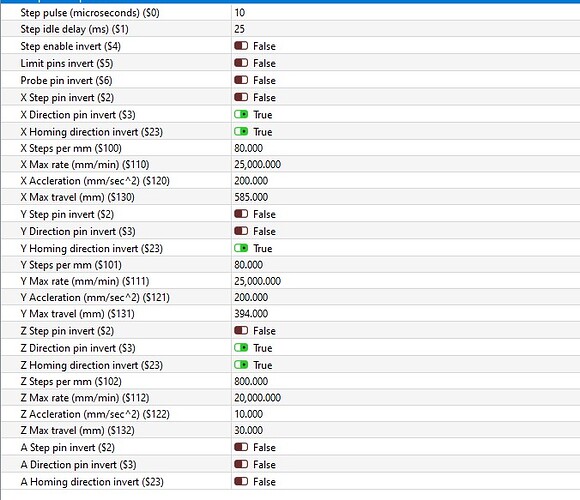 I also have this uncommented in my grbl firmware

When i use the up arrow in the move tab my laser head moves down towards my material, what i do is jog it down with it fired at 1 percent at a slow rate until it looks pretty focused, when that is done I use the get location button to make a note of its location. Very important to return it to zero position or re-home it after doing this. As an example if the “get location” says its focused at 34mm i would put that in the offset section as a negative number (-34.0) if i wanted a step that would also be a negative number.

What i usually do after my rough manual test is a “tools-focus test” with a range a little above and a mm or two below (make sure you don’t go too low and crash it) with 30 steps. So in the above example i my go 33.5 or even 33 to say 35 to 38 ( i have 62mm of travel on the axis your may be different) just make sure your second number isn’t so low the laser hits your material. The biggest thing to remember is that the laser focus test uses POSITIVE numbers not negative ones, otherwise you will crash it into your limit switch at the top, which i can say won’t halt the movement when it hits it will keep trying to go up in that case. If you turn of “optimize z moves = off” the laser will go down to burn a line, then up to zero and then down again until its completed. With “optimize z moves on” it will go down once at the beginning and complete the whole test, then go back to zero.

I may tweak my offset based on the best looking line in the focus test once its done.

You might notice I cannot stress enough to be aware that its at zero or homed before you start to burn a file if you start anything when its not at zero it will consider where it was when you started as zero and move from there and if you put a negative number in the focus test it will crash towards the limit switch and beyond.

#define HOMING_SINGLE_AXIS_COMMANDS in the firmware compile to my board allows me to issue a $HZ command in the console to perform a homing cycle only on the Z axis which i find very useful but you would have to have the ability to compile and flash your own grbl firmware into your controller.

Some of these settings may not be applicable to your hardware but maybe they can shed some light on how to get the most out of the z-axis.