About to buy license

Hello, i am about to buy a license, thinking of using GRBL-LPC.
I have a K40, M2 Nano board, using MeerK40T, and Lightburn is running.

You can request a trial extension by sending an email with the trial id in your License / Trial page to support@lightburnsoftware.com.

Ruida and GRBL have a few different options available in the UI, though I’m not sure if Meerk40t supports all of the Ruida control options. Ruida gives better control over low-end power, allowing you to set a Min Power for cuts as well as a Max Power, and that Min value is used on corners, or when moving slowly.

GRBL-LPC uses a cheaper version of the LightBurn license ($60 vs $120) since the hardware uses open source firmware that’s well documented and easy to support, vs Ruida controllers which required significant reverse engineering to get them to work.

If i do a grayscale (dither type) on my gradient test png, and all came in 100% black burn, does that mean my machine, using the trial software, cannot handle grayscale, thus, I can only do GRBL-LPC or on - off laser? is this a safe assumption? Thank you for a very fast response.

If i do a grayscale (dither type) on my gradient test png, and all came in 100% black burn

The fact that it’s a trial is irrelevant. The trial offers full functionality and is no different than fully licensed versions in terms of capability.

I can only do GRBL-LPC or on - off laser?

I didn’t really understand how you arrived at this conclusion from the previous line of reasoning. Again, in general CO2 lasers use dithering techniques to approximate darker/lighter areas so your notion of on/off is likely fair. GRBL-LPC would come into play if you changed the controller on your laser to something that runs a LPC1769 MCU like Smoothieboard.

Since you’re running Meerk40t I assume you’ve got the stock M2 Nano that came with the K40. Sounds like you were using Ruida emulation. Are you also attempting to use GRBL emulation from Meerk40t?

Are you also attempting to use GRBL emulation from Meerk40t?

this is correct… i am using the same emulation and do not see any difference.

I’m not familiar enough with how robust the emulation capabilities in Meerk40t are. It’s possible it doesn’t support grayscale at all. However, try this. Try creating a grayscale gradient. Do you get increasingly deeper burns as gray gets darker? If so that’s what you’d expect and grayscale is working.

You can use something like this or create your own. 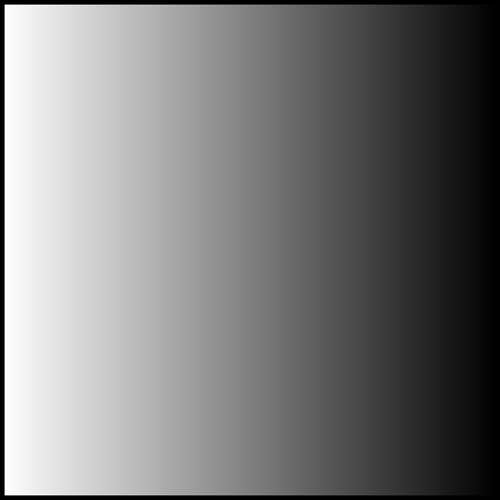 I have no idea how (or if) Meerk40t handles grayscale commands. That would be a question for the author of Meerk40t. He’s pretty responsive from what I’ve seen, so it’d be worth asking.

Thank you, this is the first thing I did, is print a grayscale, and they printed all black. Also I just found out that min max power only works with ruida and not on grbl-pc, and that is what I have observed too with my k40-meerk40t. So yes all clues are pointing to the grbl-pc. And I believe nthat is what I need.

Thank you, this is the first thing I did, is print a grayscale, and they printed all black

Min/Max is only relevant for Ruida and not on GRBL-LPC for non-grayscale operations. Think vector and non-grayscale images. GRBL manages variable power on its own for acceleration/deceleration without the min power specified. You just cannot choose a minimum value below which it won’t go in the cut setting. For grayscale, min power is relevant and available for GRBL. I have a writeup on this in an older post if you’re interested in understand how that works.

Also, to confirm, does Meerk40t explicitly call out using GRBL-LPC for LightBurn vs standard GRBL? If so, I find that a little odd as GRBL would be more ubiquitous.

Grayscale ? Yes it is an image I prepared in paint program having 10 boxes from black in box 1 to white in box 10. And they all came black with discernable difference.

About the write-up, yes please, I want to learn more.
Curious to learn that grayscale is available for GRBL

About GRBL-LPC vs GRBL, I am not really sure how to answer this, since I just read somewhere that they have used GRBL-LPC. Maybe I am totally off.

Thank you for keeping up with my questions. I really appreciate that.

And they all came black with discernable difference.

Was the difference in the depth of the burn? If so, then it’s likely working as expected.

You can read more about various image modes and how they work in LightBurn documentation:
Image Mode - LightBurn Software Documentation

Read this Topic on how grayscale maps to min/max. This was meant for diode lasers but the technical aspects are the same:

Bit of a clumsy title but here goes. Assuming I run one of those grayscale image files of eyeballs available on the web and find for that my ideal power setting is say 65%. Now, I come to run a piece that has many shades of grey but no full black areas. If I run the piece with a max power of 65%, as per the eyeball test will it overburn? Or does Lightburn assign your maximum power to #000000 (hex for colour black) and scale the power accordingly based upon what your image translates as? Mak…

About GRBL-LPC vs GRBL, I am not really sure how to answer this, since I just read somewhere that they have used GRBL-LPC. Maybe I am totally off.

Do you recall where you read this? Normally I would have expected an emulation to target either GRBL or GRBL-M2, not a relatively infrequently used implementation.