Hopefully I’ve put this in an appropriate category and didn’t somehow miss a thread with a solution I haven’t tried, but I’m having an issue getting my Ortur Laser Master 2 to burn straight lines. Or really any kind of lines without having a jagged look to them (attached media below). I’m not sure what the problem is. I’ve attempted all kinds of troubleshooting–tightening belts/screws, removing the laser housing and reattaching, cleaning, etc.–but all to no avail. I don’t even know what happened. I used it about a week ago with no issues and then went to use it today and this is happening. The only difference to note is that my LightBurn software updated, though I don’t imagine that could be the problem. 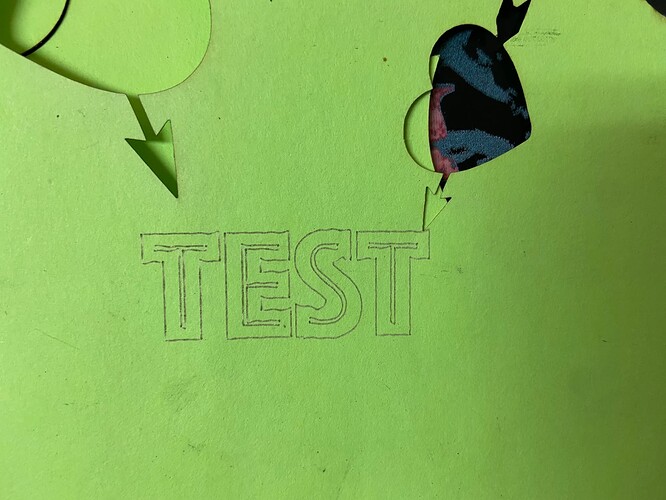 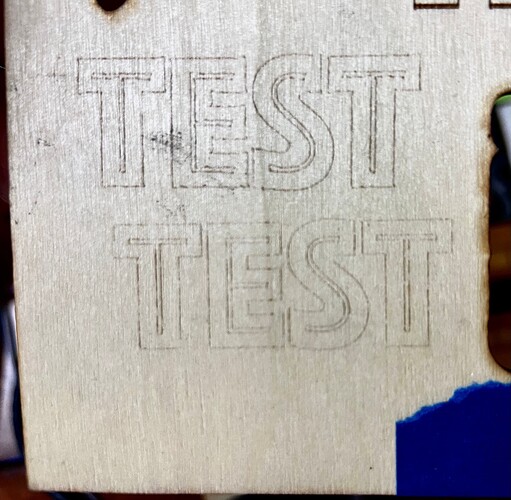 One thing that I should definitely note is that the laser housing that is attached to the plate that moves it along the X-axis is wobbly if I attempt to wiggle it. It’s not much, but there’s still a little bit of play. Additionally, one of the wheels that run along the bottom of the axis doesn’t fully touch the bar. I’m not sure how I could tighten it anymore than I already have, especially given that the holes that the wheels are mounted to are pre-drilled through the metal plate (attached below). I have attempted to rotate the wheel’s locations, though that didn’t help either. With all that being said, to my knowledge, the bit of wiggle that it currently has is something that has been present since I began using the machine last summer, so I’m not sure how it would just now be manifesting any sort of problems. 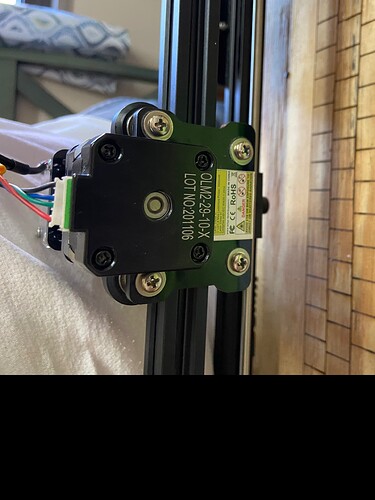 I’ve found answers concerning a “loose laser” or “loose mirror,” but I’ve not managed to find anything online regarding how to fix either issue on this machine. I’m not even sure how I would get to anything inside the housing as there’s no obvious opening anyway.

Needless to say, I’m very frustrated and not sure what else to do. Hopefully someone out there can help point me in the right direction. I would really appreciate any and all assistance.

Additionally, one of the wheels that run along the bottom of the axis doesn’t fully touch the bar.

This is most likely the issue.

You can close the gap by rotating the eccentric nut. It sits between the wheel and the mounting plate. It will almost look like the shaft connecting the wheel to the plate. Rotate the nut until the gap is closed. Do this for all wheels.

Do not overtighten this but you don’t want any gap between the wheel and rail. Just don’t cause it to start binding. It should still roll smoothly and very easily.

I was super excited to see a suggestion I hadn’t tried yet and was hoping that it would remedy my issue. I tightened the eccentric nuts, which got rid of the bit of wiggle and now has that other wheel catching. After a number of tests this morning, it certainly looks a bit better, but I’m still having the same problem.

In the image above, I ran the test at two different speeds (1500 mm/min and 3500 mm/min). The slower one looks mostly fine, and I normally run a bit slower on my projects, but I’m still getting weird line drops (marked in the photo). It still wouldn’t be acceptable for any of the projects I need to be working on though. The faster one certainly is better than before, but there’s obviously still a problem somewhere.

Hopefully you–or anyone else–has another suggestion I can give a go. Thanks.

Hard to tell just from the photos. What is physically happening with the laser head at the marked spots. I assume it’s in transition to the next stop. Is the laser burning clockwise or counter-clockwise direction?

It’s possible you still have some play in the wheels.

Another thing to look at is the way your lens is mounted into the module body. Which laser module do you have? Is it a model with adjustable focus where you can easily remove the lens? If so, try pushing the focusing ring laterally across the laser module… does the ring wiggle freely? If so, try putting some teflon tape around the threads of the lens barrel to take away any play between the lens and module when reinserted.

If it’s not a lens issue try running some other test patterns. Run a series of horizontal lines, vertical lines, circle, and square. Run at different speeds. Will help clue you in on what next to look at.