Hello all. I just changed PC because my old one died. I have successfully downloaded the software and added my machine and laser, but I can’t get anything to burn. The laser comes on and appears to be working correctly, but it will not burn anything. I never had this issue with the old cpu. I am hoping it is a setting. I have slowed it down to extremely slow and went all the way up to 100% power. Still nothing… What should I do?

Edit:
A little more info: I have a Chinese diode laser 15w 450nm. I am using the latest version of lightburn I assume, as I just downloaded it. I am trying to burn simple arial font. I have tried different types of wood at different speeds and power settings. As for the settings in lightburn, I have no idea how to tell you what I have. On the console it says grbl 1.1g. My laser is connected to an openbuilds blackbox.

Did you enable the laser in the device settings?
You could be in beginner mode. It’s shown at the top of the screen.

If you new here, it might not be possible. But you can put a photo on your Google drive and put a link here to it.

laser comes on and appears to be working correctly

Not sure what you mean here. What appears to be working correctly?

Not sure what you mean here. What appears to be working correctly?

The laser lights up and clicks on and off. I can see the beam, but it won’t burn anything. I will check the other suggestions and thanks for the reply!

Here is some more info: 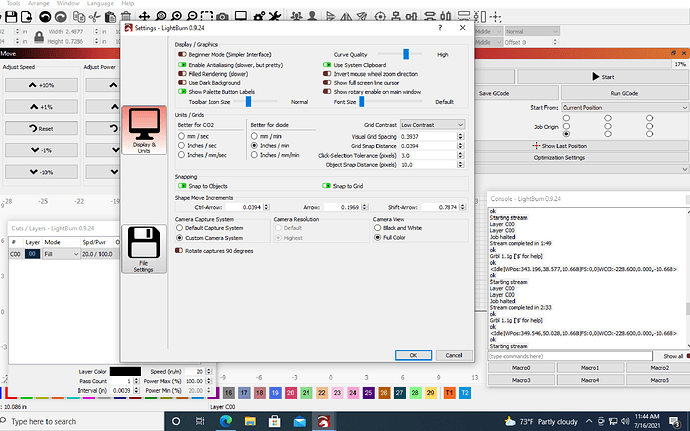 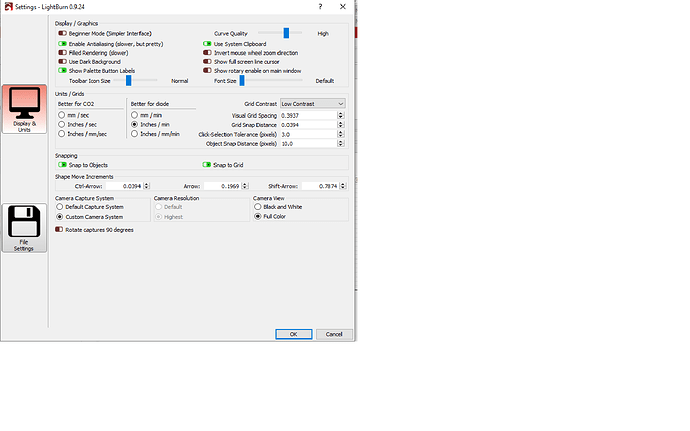 Still no luck… Any ideas?

I have a couple of these laser heads but they basically have B+, ground and PWM that controls the intensity. If it’s working at low power for framing, that would indicate that the PWM part of the controller hardware is ok. To turn it on at a low level requires that % PWM.

I noticed that you have $10 set to zero, this blocks much of the information sent to the controlling software such as current position. I think at minimum it should be 3. Maybe someone else can chime in on that. Don’t think this is an issue now, but you should be aware.

Did you Enable laser fire button?

After that, do you have any way to check the PWM output of the controller?

Thanks for your help!

Did you Enable laser fire button?

Yes, I enabled the fire button.

After that, do you have any way to check the PWM output of the controller?

I have a blackbox controller from openbuilds (not sure if you are familiar). From my understanding, it is basically an arduino uno with drivers. Two of the wires from the laser are connected to the “tool head” connector on the blackbox. The other two to b+ and b-.
I assume the two wires coming from “tool head” are the pwm output. I checked them with a volt meter while a job was going, and the voltage bounced around from 0v-about 4v. This seemed to me to be correct, as I assume 0v is off and 5v is full power.

At 4v I would think it should be burning, but nothing.

Has my diode laser gone bad? Even though i can see the light and it appears to be working?

Looking at the output from that controller

It’s hard for me to tell exactly. What I do know is that they take Power and ground for the hardware to function, since it’s not just your signal that does it.

Next the PWM is what tells your laser when to fire and how hard. Sounds like you have that handled.

If you pull that line to a logic high, the laser should fire full power.

So you are reading a varying voltage, it’s indicating the PWM is probably working.

The kind of leaves it to be the laser itself

Ensure you are getting full power supply voltage and current to the diode. At least ensure it’s available. Can’t think of much else you can do…

Still having no luck. So, I should be able to put 12v (power and ground) to laser and 5v to the pwm wire (yellow?) and test the laser. This should be 100% power coming out of laser correct?

that is correct but you do have to have the ground from the 12V power also connected to the ground of the 5V power supply.

Since you had said your laser worked perfectly fine before your computer crashed and you setup a new computer with LightBurn, I would not even be looking at or messing with your controller hardware.

FYI, if it was Microsoft Windows which crashed on that computer and you decided to just get another computer instead of trying to fix it, then you can probably boot Linux off of a USB thumb drive and maybe recover your previous LightBurn preference file. Thousands of people and probably more than that have used Linux to rescue filed Windows systems so there are lots of HowTo’s online for doing this.

Also, do not run your laser for very long at 100% power. Just a quick test only. FYI, you should also make sure you have your machine running at the same speed as you were used to because if it is running much faster than before it will burn much less even at the same power setting. You can also look at your Machine Settings to see if anything looks off( max power setting , min power setting, etc ) and also look at your defaults for the layer settings.

I believe he’s running a grbl based controller. They should not have min, max power settings available in Lightburn.

So, I tested it with the grounds connected together to the same 12v/5v supply and the pwm connected to 5v. The laser lights up as it should, but still will not burn anything… I assume this means bad laser or laser driver?
Is there a way to tell which?
Is it worth trying to fix?

The pwm tied to 5v will set the laser output to maximum.

laser lights up as it should, but still will not burn anything…

If it’s focused and full power then the problem is from the laser input to the diode itself, i.e. the laser itself. Probably not user serviceable. I think you’ll probably be purchasing one.

How long have you had it and how hard did you run it? Just curious.

It must be well focused and I would look at the 12V while it is firing to see that it stays at 12V and is not being pulled down due to high power requirements and weak power supply.

Just can’t buy into the fact the diode has passed away? I doubt it’s drawing too much current, you could feel it and probably smell it…

I have had the laser less than 1 year. I never ran it over 90%. I have only used it as a hobby laser. I would say very mild use. I don’t know what else to try to see if it is the laser. I have tried two different power supplies. I would think with 12v supplied to module and 5v directly to the pwm wire the laser should be burning. I am not sure how to tell if it is the diode or the driver however….
Thanks!