I know there has been a lot of discussion on joining nodes… If there is one thing i waste time with in LB it is trying to get 2 nodes to join. It seems that if I ‘break’ a line then it is near impossible to get the mongrel line to join again. I have to manually duplicate one end of the line (Very annoying… when it involves a complicated part of a graphic) following the shape needed until it is back to the start position and try again to join. ‘alt+J’ etc never works. The only thing that will join nodes is to go 'edit… close path. But even that fails if the line decides it will not close/join. Which is more often than not. This is with all lines/nodes in one colour/layer. I’m scared to ever dis-join a line now. Often needed to tidy up results of a trace etc. What am I missing? Ahhhhhh…growl…mutter… scowl… attack keyboard etc…

Post a file that you’re having trouble with, or email to support@lightburnsoftware if you don’t want it public so we can have a look.

Lightburn is by far the best laser software in the market right now. Oz and the team continue to innovate. Sometimes I read these threads and wonder where folks are coming from. Illustrator or Corel Draw have been around for decades and as a design tool they are far more powerful for design. Tweaking in LB is awesome but you might look into learning some serious vector tools to get those things worked out before it’s imported to LB. Good luck and kind regards.

There is a quirk of the way LightBurn internally represents shapes that can make it really hard for the code that does node editing to figure out if two things can / should be able to join or not. If you can post (or email) an example that doesn’t work for you, it’ll be easier for me to try to chase it down.

i concur with the post. joining nodes is always a struggle.

would it be possible to select two nodes , press a shortcut , to simply MOVE one of the nodes to join the other ? irrespective of distance or zoom level?

so the two nodes become one.

as has been stated, in lightburn we can perform total miracles in no time at all , and then really struggle for 5 minutes trying to join two nodes !!

thanks for all you do Oz , and the team.

It works almost exactly this way if you are node editing - you grab one node and drag it to another and the snapping makes them exact. The problem is that sometimes the software can’t determine if the two shapes will connect, or the correct way to format the result to make a single continuous shape, which is why I need examples to try.

i suspect it’s the dragging that is the problem.

perhaps the snapping is fighting against us during the dragging?

so if instead of using dragging , if there was a function to arbitrarily MOVE one of the nodes to match the other , would that be easier to code? it would certainly be easy to use.

The drag is trivial, and works perfectly - if you grab one node and drag it to another, they snap, and the positions are identical - I’ve verified this. The problem arises in the next bit, which decides whether two nodes should be joined:

The second part is the hard one, and it’s due to the way LightBurn represents path shapes internally. I store shapes as two lists - one for the node positions, and another to say how to connect those nodes. That lists sometimes end up in weird orders, and it makes figuring out if two shapes can be properly connected quite hard.

We’re going to change the way LightBurn stores things under the hood to make this kind of thing easier, but it means rewriting a large chunk of the fundamental parts of LightBurn - all the code that deals with shapes, offsets, merging, editing, drawing, etc will have to be updated, and that’s going to take a while to do.

Hi, here is a new try with the file - I say new because I dont want to fiddle with the one I spent so much time getting to work. But , this is doing the same thing.

Appreciate your efforts and are always amazed at the response Lightburn gives to questions and the willingness to look at files etc.
Just have to find the secret labyrinth path on how to attach said file now… cant see anything at the top that says ‘attach file’ so will just have to experiment. Lets try ‘upload’ , maybe that means ‘upload a file’ who knowsBig Rat.lbrn (430.8 KB)

I had no issues with this. I went to Edit nodes, grabbed the end of one line and dragged it over to the other one. They joined immediately, as did the other gap. 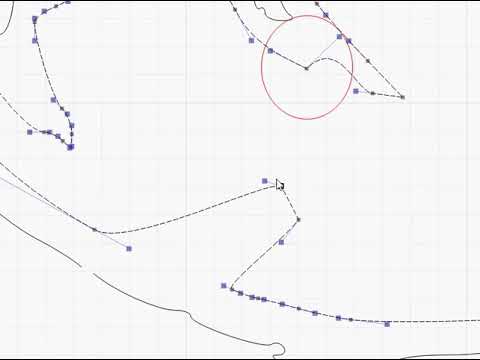 ummm… great. This does not work on my system… Nodes never join in this way. It must be ‘edit’ - Close path… which works on occasion. Is there some background setting or snap option I have to set?
Thanks for the reply

Do you have your object snaps disabled in the settings? 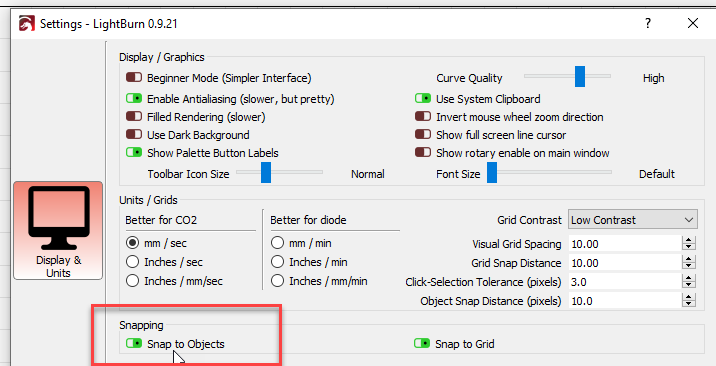 Hi, Yes… it is off. I have turned it on and .Hey presto. It joins nodes. Will experiment. I generally have ‘snap to’ options off in all my software as I find they tend to snap to stuff i dont want. (i.e. Let me control the thing - and I’ll tell it what to do thanks. ") Hope this continues to work. And perhaps others with the same issues can get any easy fix like this. Thanks again

Press Ctrl to bypass snapping if it gets in your way. Most of the time it’s really useful, and some things like this are governed by it. I could make it ignore the snap options in node editing, because they’re pretty important there, but in general, since it’s trivial to bypass them with the Ctrl key, it didn’t seem necessary.

LB is great considering the cost. “…by far the best…” – no! There are significant missing tools that others have. Consider three intersecting circles and now remove the outer portion of each circle to create a three bladed propeller–can’t do it in LB. Trivial to do in others such as the Vectric suite (although much more expensive) software. I would concede that is is one of the best hobby grade. 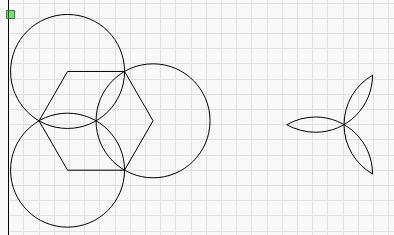 Draw three circles, use the (T)rim tool in Node Edit to clip them, or use (I)nsert to add new nodes where the intersection snaps happen, then connect the lines. This took about a minute. Just because you haven’t learned all the tools in the software doesn’t mean they aren’t there.

LightBurn is a $ 40/80 software for managing laser machines. LightBurn has in addition to the most user-friendly laser control some basic tools for editing and has never claimed to be a CAD program.
But who knows, maybe one day it will be possible to design 3D turbine blades, propellers, or wash my socks with LightBurn, it should not be so difficult …, the one with the socks

Wow. Thank you Oz. I didn’t know about the hidden command (T)rim. I was looking for an icon or menu selection. You just opened up a new (for me) capability. I do nearly all of my design effort in one of the Vectric products although I’ve been recommending LB for my clients that don’t want to spend the money for the more expensive solutions. So my knowledge of LB was/is somewhat that of a novice. Possibly, I should spend an hour or two going over the documentation–something I hate to do. Either way, thank you for the info. I’ll be searching for other “hidden” commands.

Point the mouse at the ‘Edit Nodes’ button and press the F1 (help) key. This is one of the first tips in the ‘Beginner Walkthrough’ in the docs. We also have Boolean features which do that same thing rather quickly: 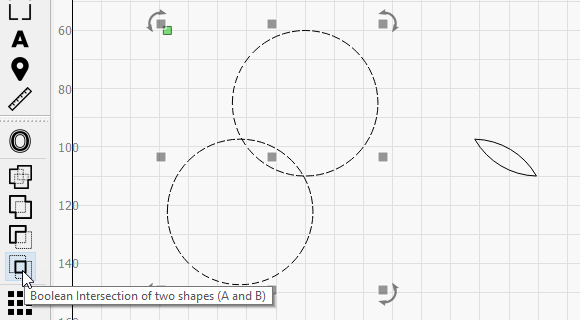 And from there you can use the circular array tool to make three of them at the proper interval: 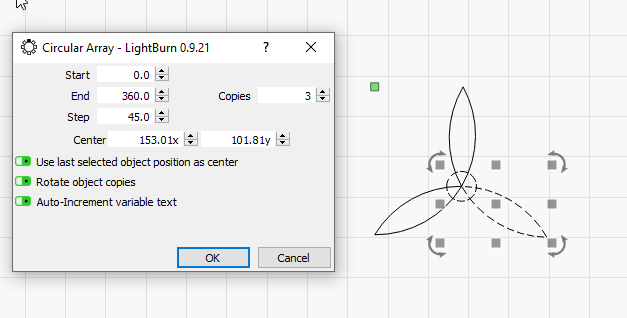